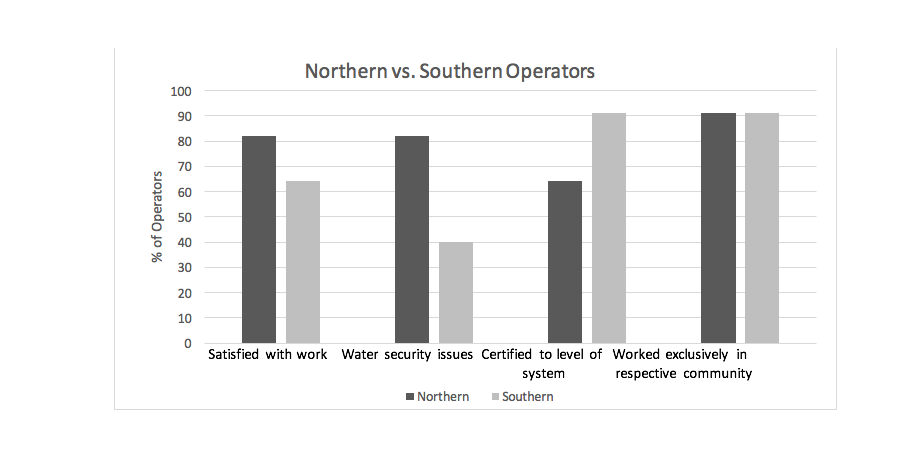 In a report led by Richard Harvey et al., “Using Data Mining to Understand Drinking Water Advisories in Small Water Systems” published in the Journal of Water Resources Management, the authors assessed drinking water advisory records in northern Ontario using a data-mining model of DWA records. The authors found that the most important attribute that makes a system likely to have drinking water advisories is the presence or absence of a certified primary water treatment operator. Results also indicated that First Nations communities that employ primary operators with minimal training have a 64 per cent likelihood of a boil water advisory.

In 2007, Indian and Northern Affairs Canada published a report entitled, Summative Evaluation of the First Nations Water Management Strategy, that highlighted a severe shortage of certified water-treatment system operators in First Nations communities as part of the problem. Approximately 25 per cent of operators in a First Nation community reported having left their job for either municipal or private industry. Skilled First Nations operators are leaving the communities they are employed in search of other opportunities in related fields.

Given the importance of operators in providing clean water, our team distributed a survey to identify factors influencing the degree of satisfaction among First Nations water treatment operators. The survey that was designed to shed light on the high levels of turnover showed that the problems associated with hiring and retaining water operators are largely tied to aspects of the job that increase job satisfaction and the role of water treatment operators in the community. Survey questions focused on influences of remoteness of the community, community population, level of certification of the operator, time spent as an operator, salary, satisfaction with work, and the specific water issues associated with that community.

Key factors contributing to the challenges of hiring and retaining skilled operator include: operators not being hired from within the community, lack of stability in funding, changes in management, differences of opinion between operators and band council, the draw of other off-reserve job opportunities, and lack of satisfaction with their work. For many communities, the funding they receive may be insufficient to cover the costs needed to support hiring of new operators which is another indicator of the challenge of retaining certified operators.

The findings indicate that job satisfaction and their perceived role in the community were key factors to success of operations. On average, northern water operators are more satisfied with their jobs (82 per cent), as opposed to 64 per cent in southern communities. Northern operators were generally paid a lower salary, worked fewer hours and received less paid vacation; yet, they were required to address a greater number of water security issues.

A chart summarizing the main questionnaire findings is shown below:

Whereas salaries were cited as affecting job satisfaction by operators in southern communities, this fact did not show up among responses from northern communities. Examples of wage-related responses by southern operators included: “the wages should match those of off-reserve water operators,” or, “it is ridiculous how little I get paid for the work I do.”

Water security was another theme that emerged for northern communities. One operator stated, “the community is very important” and, “the work is close to home”. It was more frequent for northern First Nation water treatment plant operators to remain employed in their community than their southern counterparts. In fact, 91 per cent of responses from northern operators indicated that they had only ever worked in their respective community and thus chose to remain close to home, with little desire to leave for an opportunity elsewhere. This is partially explained by the remoteness of those communities.

Northern operators tended towards feeling more connected to their community and noted that it would be difficult for them to look elsewhere for work. In comparison, operators in the south, who also stated that they had only been employed as a certified operator in their respective community (91 per cent), indicated that they would leave for reasons such as community politics, changes in management, disagreements with band council, or more generally, to seek new opportunities. Finding higher paid employment was a common motivation for operators in southern Ontario to leave their position in the community.

A great number of First Nations groups, non-profit organizations, and political figures have raised the profile of the number of boil water advisories on First Nations reserves in recent years, and with good reason. However, it is clear that the capacity of water treatment operators is a crucial component of improving water access to First Nations people. Addressing job satisfaction is especially important for First Nations operators in southern communities; and while providing salaries that are equal to municipal operators is part of this, clearly a more holistic view to supporting operators’ needs is also necessary.

Elliott Corston-Pine is the facilitator of water needs of FN communities (in Ontario) with the University of Guelph. Ed McBean is a professor of water resource in the School of Engineering and Canada research chair in water supply security. Matthew Grekula is pursuing his undergraduate degree.