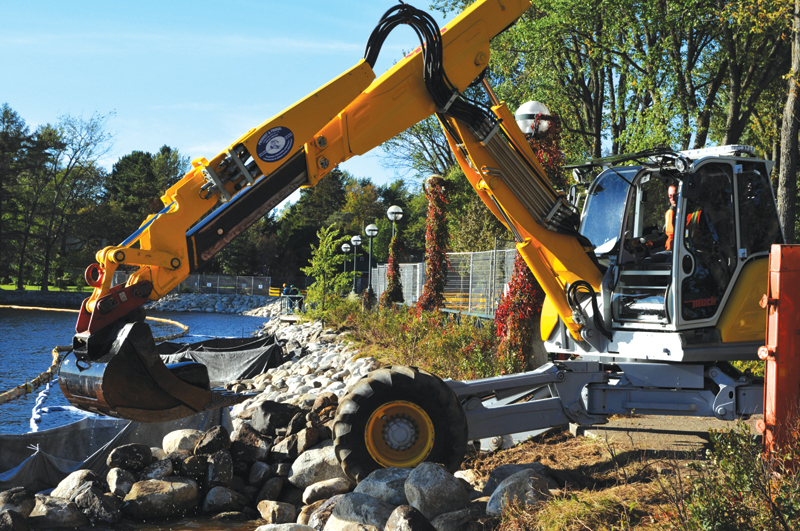 On July 6, shortly after midnight, a freight train carrying 7.2 million litres of light North Dakota crude to a New Brunswick refinery derailed in Lac-Mégantic, Quebec. The Montreal, Maine & Atlantic Railway train had stopped overnight and was sitting unattended in a rail yard atop a nearby hill when it began to move. The cars quickly gained momentum, rolled downhill, left the tracks, and slammed into several buildings. A series of explosions followed, decimating the downtown core, killing 47 people and unleashing an inferno that took 150 firefighters two days to extinguish. Roughly 2,000 people—one-third of the population—were evacuated from their homes, some with nothing to return to, and the town lost its library, archives, and more than 100 homes and businesses. While the human casualties have proven particularly agonizing—several people remain unaccounted for and are believed to have been vaporized by the intense heat—the community faces another long-term challenge: much of the oil spilled into surrounding waterways and could take years to clean up.

Both rail transportation and water are central to Lac-Mégantic. Founded in 1884 as part of the campaign to build Canada’s iconic transcontinental railway, the town is named after its adjacent lake. Mégantic, in fact, is drawn from the Abenaki word namesokanjik, which translates to “place where the fish are held.” And so it goes: this section of Quebec’s Eastern Townships lies within an important rail corridor and is highly dependent on tourists who come to fish, hunt, and enjoy the lush countryside. In town, the popular Complexe Baie-des-Sables beachfront hosts the annual Traversée internationale du lac Mégantic swim meet. So when 72 rail cars, each built to hold 113,000 litres of crude, derailed, the stage was set for a life-changing event.

Robert Mercier, the municipality’s director of environment, was asleep when the cars derailed just 500 feet from his home. “The first few seconds we didn’t know what happened, we just ran,” Mercier says, explaining that he initially wondered if a meteor had struck. Once outside, in full view of the flames and billowing smoke, Mercier realized what was happening. After leading his family to safety, he returned to assist with the kind of mobilization that keeps emergency preparedness planners awake at night. In short order, the lights went out and buildings began to collapse. Officials shut the town’s water supply, realizing it was studded with leaks and ruptures, and used generators and pumps to draw water from the lake to help fight the flames. A passing thunderstorm hampered efforts even further, damaging the mechanism that automates the pumping system. “We had to calibrate the reservoir and start and stop pumps and other equipment by hand,” Mercier says.

Over the next few days, as search-and-rescue teams combed through the wreckage and firefighters completed their work, a forensics unit from the Transportation Safety Board of Canada set out to investigate one of the deadliest rail mishaps in Canadian history and cleanup crews began to grapple with the spilled cargo. Not only did the oil soak into the ground and enter Lake Mégantic and the nearby Chaudière River, but it infiltrated the town’s combined storm and sanitary sewers. “When we arrived at the wastewater treatment plant, everything was full of petroleum,” Mercier says, explaining a decision, taken by the provincial environment ministry, to bypass the station and temporarily redirect stormwater and sewage to the Chaudière in order to contain oil that had reached the plant. “We had to decide whether we wanted oil going into the river or organic material going into the river,” Mercier says, adding that crews managed to pump oil from the sewers and wastewater treatment plant and bring the system back online in less than a week.

A Golder Associates report released in September highlighted the severity of the spill. While most of the oil burned, several hundred thousand litres infiltrated the soil and sewer system, and more than 100,000 litres entered the waterways, the bulk of it drawn into the river by strong currents. Some observers reported coloured streaks as far downstream as Quebec City and the St. Lawrence River, 185 kilometres away, and the spill forced communities along the way, including Lévis, Saint-Georges, and Sainte-Marie, to turn temporarily to alternate sources for their drinking water. Preliminary soil tests conducted for the Golder report revealed higher than officially accepted levels of volatile organic compounds such as benzene and toluene and metals such as arsenic, copper, and lead, as well as dioxins and furans in various areas of the impacted zone. And early sampling of lake sediment near the shores revealed some of the same contaminants.

Michel Rousseau, assistant deputy minister with Quebec’s Ministry of Sustainable Development, Environment, Wildlife and Parks, says once the fire was under control, crews used booms, skimmers, and large absorbent pads to contain oil, and rakes and pressurized water to disperse crude that gathered under rocks and within the vegetation at the water’s edge. Rousseau says the ministry decided against using chemical surfactants so as not to add to the contamination. “The quality of the water was okay and the fish and birds were in good health, so we didn’t want to take any chances,” Rousseau explains.

Indeed, oil spills conjure images of blackened ducks and dead fish by the thousands. Yet officials reported only small numbers of oil-soaked waterfowl and fish carcasses, as well as relatively clear water surfaces. Rousseau says he expects work along the shorelines will be largely completed before winter sets in. “There will probably be small amounts of petroleum along the river, but we’re confident the natural process will be able to take care of that,” he adds, quick to acknowledge that only short-term effects can be accounted for at this early stage. The Golder report, which the ministry characterizes as a preliminary investigation, did not examine the river sediment, and cleanup crews haven’t yet begun to address oil that may have been churned up in swift-moving sections and submerged.

All told, a full cleanup could take several years. The Golder report says as much as 112,000 cubic metres of contaminated soil will need to be removed for treatment and eventual disposal. While oil currently in the soil appears to be relatively stable, a heavy rainfall or spring-like melt could potentially discharge some of it into waterways. To contain the oil, the report recommends maintaining booms and continuing to pump contaminated water. The report also calls for a plan to be in place before the winter to replace downtown sections of the sewer system that were damaged.

Rousseau and Mercier concede there are too many uncertainties to offer a long-term prognosis or even accurately forecast full cleanup costs beyond “many millions of dollars.” Indeed, Tim Stemp, a general manager of remediation with Quantum Murray, an environmental services firm, says methods used to clean oil spills depend on the situation at hand. Booms are commonly used on water to contain surface oil, which can then be removed with absorbent pads and vacuum-equipped trucks. But booms on rivers must be placed quickly and strategically to help prevent oil from migrating downstream. “You’re also probably looking at trying to wash riverbanks as well,” Stemp says, adding that small amounts of oil generally dissipate over time. In particularly fast-moving water, oil can emulsify and end up in the sediment, and the same can happen in any water body if the oil contains chemicals that are heavier than water or contain, as is sometimes the case with bitumen, components which are dense and non-aqueous. Crews can use aeration and pump systems to free up and capture contaminants trapped in river sediment or in underground aquifers, he adds.

On land, crews generally drill wells to pump out groundwater, which can then be treated. Contaminants that seep into a water table can also be oxidized and broken down through chemical-injection systems, and passive-reactive barrier wall-type systems can be installed below ground. “There’s a re-agent in the wall, and as groundwater passes through, a chemical reaction either breaks down the contaminants or precipitates them out,” Stemp says. “The groundwater coming out the other side would have a lower concentration of contaminants.” As well, contamination underneath buildings or other structures might require shoring or other support systems for access. “You need to study the problem before you start digging so you don’t create a worse problem than what’s already there,” he explains.

Rosa Galvez-Cloutier, chair of civil and water engineering at Université Laval in Quebec City, concurs it’s too early to know definitively what the spill’s long-term effects might be. She was visiting the town with friends, staying just one kilometre away, when the derailment occurred. One of the city’s main attractions had been fishing, but officials issued an advisory not to consume the river’s fish or, for that matter, to swim. Galvez-Cloutier’s students tested water samples and found that while individual hydrocarbons in some areas fall below detectable limits, recommended levels are exceeded when combined as a class of chemicals. As well, she points out, even low traces that can’t be measured with existing technology could still easily absorb into the fat of fish and other creatures living on or in the waterways. “We’ll need to wait until next year and analyze the fish to confirm if they are safe,” she says.

While Galvez-Cloutier doesn’t recall any spills in Canada on the level of the one that struck Lac-Mégantic, she’s watching the outcome of one where 450,000 litres of bunker oil spilled near a shipping operation at nearby Sept-Îles in early September. With concern about aquatic life and adjacent salt marshes, Fisheries and Oceans Canada halted commercial and recreation fishing in the area. Some spills can prove painfully enduring. Crews are still dealing with the aftermath of the 2010 Enbridge pipeline rupture in Michigan, which dispatched roughly 3.8 million litres of diluted bitumen into wetlands leading to the Kalamazoo River. With the moving of dangerous goods common by rail and other modes of transportation, all eyes are on Lac-Mégantic. At the very least, the tragedy offers a marker of what can happen when things go horribly wrong.  WC

Saul Chernos is a freelance writer based in Toronto. This article appears in Water Canada’s November/December 2013 issue.