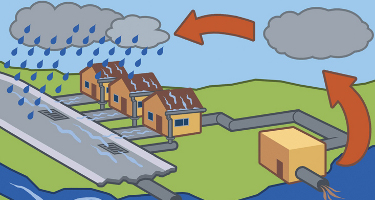 Low Impact Development (LID), the concept of onsite management of stormwater through natural, decentralized controls, has been catching on fast across Canada and the United States over the last decade. However, any new engineering solution with merit is going to face challenges to adoption as a standard practice. The path of LID’s acceptance into code and practice is fraught with regulatory, professional and community roadblocks.

An important stakeholder group where LID is concerned is homeowners. There’s been some effort on the government’s part to educate them about LID and their role in its advancement.

Ontario has introduced legislation in the last few years that provides more opportunities for LID to take hold. The Greenbelt Act details specific objectives to restore and improve the ecological and hydrological functions and to ensure development of transportation and infrastructure proceeds in an environmentally sensitive manner. While the act also includes language that encourages public participation in the review process, it’s the Ontario Clean Water Act that really zeroes in on what is commonly seen as one of the major challenges to LID: community buy-in. Strong wording requires local communities to “look at existing and potential threats to their water and set out and implement the actions necessary to reduce or eliminate significant threats.” It empowers community groups to do so through the formation of Source Protection Committees, which enables public participation in the planning process.

One of the most straightforward and easy-to-implement LID strategies involves disconnecting roof downspouts from combined sewer systems (CSS), a system of shared sewer pipe between wastewater and stormwater. Overloading the CSS causes overflow of stormwater and untreated sewage into local surface waters.  Furthermore, basement flooding is a common problem in certain regions tied to the CSS, as wastewater from the house gets backed up due to downstream overloads.  If homeowners properly direct roof runoff, water has a chance to infiltrate and recharge the groundwater supply.

To combat overflow problems, the City of Toronto began a voluntary disconnection program in 1998. At the time, it was estimated that 120,000 residences were hooked up to a CSS. It was considered successful, but the City’s statistics suggest that the adoption rate was slow. Between 1998 and 2007, an average of 2,000 homeowners per year received subsidies to disconnect their downspouts. In November 2007, the program became mandatory, giving homeowners three years to disconnect from the CSS at their own expense. In 2008, that program was extended by another year, which ends in November 2011. Just prior to adoption of the mandatory program, some 40,000 residents signed up for government assistance, but statistics were unavailable as to how many of those homeowners completed the disconnections.

Herein lies one of the critical roadblocks to LID implementation on a much larger scale. Clearly, if onsite management of stormwater is going to become the norm, the onsite managers have to be willing and motivated to do it. But should they be motivated with a carrot or a stick? Putting the onus on homeowners to manage this issue requires a completely different way of thinking-fear of regulatory action needs to be replaced with a feeling of ownership in the process. This is consistent with the language behind the Ontario Clean Water Act.

With up to 15 overflows per year in the most affected areas of Toronto’s CSS neighbourhoods, homeowners often agree that stormwater is a nuisance-and they can blame past urban planning decisions. With traditional development, watersheds become less pervious and urban forestry decreases, making it significantly more difficult for water to infiltrate into soil and transpire from tree canopies. Water, in this old-hat plan, has nowhere to go-except to the end of a pipe.

Residents need to understand their critical part in the process, and the first step is get away from the idea that stormwater is a nuisance.

For over a decade, the RiverSides Stewardship Alliance has promoted onsite stormwater management. The organization formed in Toronto in 1998, following a two-year effort to comprehensively survey the residents of the Don River Watershed and their understanding of stormwater impacts on the river. As a result, RiverSides developed its internationally recognized 5 Things You Can Do for Your River Program for helping residents make the connection between watershed activity and overall surface water health.

See also  Plenty of Room at the Table

Developing community awareness is at the program’s core. Aiming to give homeowners an understanding of the hydrological cycle, interruptions through impervious development, and costs associated with urban runoff, RiverSides is the source of the “Toronto Homeowner’s Guide to Rainfall” and associated workshops. It promotes infiltration rather than runoff with the use of rain barrels, rain gardens, vegetated swales, permeable pavers, and trees. The Guide also includes useful tools to help calculate site runoff, and to properly size and design onsite management controls.

The group also developed and distributed its own RiverSafe rain barrel, used in programs in Ottawa, Washington, D.C., and in collaboration with the City of Pittsburgh. The barrel manages roof runoff and operates on water and energy conservation levels. Harvested rainwater can be used for irrigation; overflow can be infiltrated to recharge groundwater aquifers.

According to RiverSides’ former executive director, Kevin Mercer, improper sizing of rain barrels, which typically range in size from 230 to 560 litres, is one of the barriers to its adoption as a viable stormwater best management practice (BMP).

In Mercer’s estimation, many municipalities are touting the smaller barrel as part of their LID programs. A 2005 study conducted for RiverSides’ collaboration with the City of Pittsburgh’s Nine Mile Run Rain Barrel Initiative says that the use of a smaller barrel would have resulted in overflows of 24 times a year for a 12-millimetre rain event. By switching to the 560-litre rain barrel, a 25-millimetre rainstorm would fill the barrel to roughly 60 per cent of its capacity, which would occur approximately seven times a year. Another way of looking at it: for over 90 per cent of the rainstorms in the Pittsburgh area, the larger rain barrel can successfully store rainwater and help prevent contribution to combined sewer overflows.

Ongoing maintenance is also critical to the barrel’s viability as a BMP. A 560-litre rain barrel may successfully store rainwater during a 25-millimetre rain event, but if another event occurs on its heels and the barrel has not been properly emptied, the BMP does not work as intended. This issue highlights the need for what Mercer calls the “municipality-homeowner partnership.” Essentially, the municipality is providing a piece of stormwater infrastructure to be used onsite by the homeowner and assume that the homeowner is going to properly maintain the BMP without oversight.

For LID implementation to be truly successful, the partnership needs to be bridged through dedicated and ongoing social marketing and educational outreach. Municipalities should start by promoting LID programs that have a chance to succeed.

In the case of rain barrel programs, they simply can’t promote the use of smaller barrels-that kind of program will stall before it even has a chance to get off the ground. Washington, D.C., for example, started off on the wrong foot, but stepped back, reevaluated its rain barrel program, and switched to the larger size.

Where maintenance is concerned, handing it over to the homeowner without any kind of oversight will lead to failure. Similarly, if homeowners can’t see the impact of their maintenance on the watershed, they may not understand the importance of their involvement.

Municipalities need to reach out by sending seasonal reminders to homeowners, through door-to-door campaigns, public service announcements, and workshops. If they are unable to do so, then they need to partner with organizations like RiverSides who can act as their social marketing arm.  Homeowners need to do their part by following through on their end.

Successful LID implementation is an ongoing cooperative process that benefits all of the stakeholders. If it’s done right, it really shouldn’t require a carrot or a stick.

Matt Baumgardner is an environmental engineer for EnviroSolve Corporation, tracking and writing about stormwater resources at stormwaterlibrary.com.