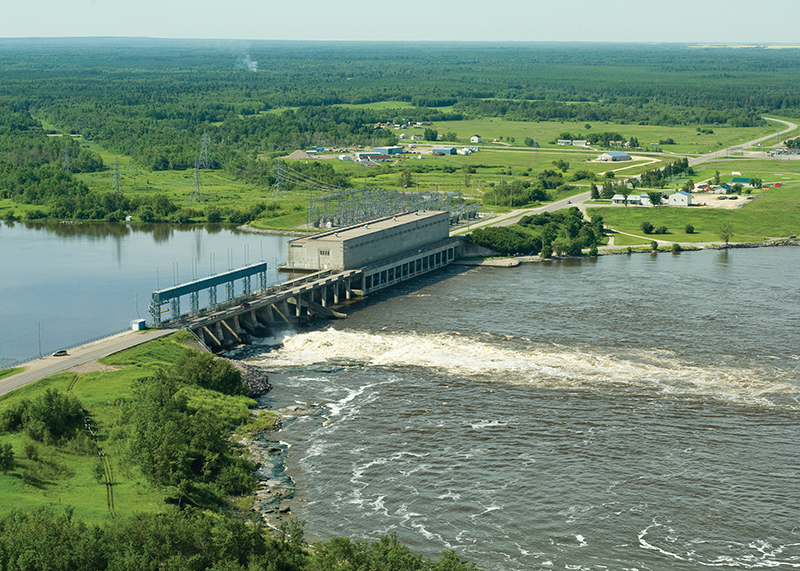 Canada has generated electricity from the kinetic energy of flowing water since the days of the horse and buggy. And while our energy systems have of course utterly transformed since the 19th century, the individual components at the heart of every waterpower station—such as the turbine runner and shaft, and the generator rotor and stator—remain largely similar. With regular care, hundreds of such stations have been reliably and affordably doing their thing, for decade after decade, without so much as a blip.

That said, many of the waterpower stations within Canada’s extensive fleet are now entering their golden years. And even the best-cared-for and most durable generating units eventually need a tune up or outright replacement.

“This equipment has a life, like the engine in your car,” explained Mike Martelli, Ontario Power Generation’s president of renewable generation. Martelli oversees the crown corporation’s 66 waterpower stations, with a collective capacity of about 7.5 gigawatts of renewable electricity.

“From time to time, you have to change your car’s oil,” Martelli said. “But if you keep it long enough, you eventually have to change the engine as well.”

Metaphorically speaking, that’s exactly what is happening at a number of Canadian hydroelectricity producers. They’ve embarked upon a series of revitalization projects to overhaul, replace, and upgrade equipment and infrastructure. In doing so, some are finding hundreds of fresh megawatts, or more, of generation capacity at their existing sites.

As provinces move to introduce climate policies that reduce fossil fuel combustion in electricity generation, transportation, industry, buildings, and elsewhere, they will seek out new power with ultra-low greenhouse gas emissions. Which is, of course, exactly what waterpower offers.

“Almost every Canadian waterpower generator is preparing for the inevitable decarbonisation and electrification of the economy, and examining the opportunity to leverage as much additional capacity as they can from existing waterpower stations,” explained Anne-Raphaëlle Audouin, president of WaterPower Canada, the national trade association for hydroelectricity producers in Canada.

“There are thousands of megawatts of potential new waterpower generation capacity waiting to be harnessed in Canada, just from refurbishing and redeveloping existing generation units and sites,” added Audouin. “The additional hydroelectricity produced can be delivered at a lower cost than most—if not all—other options for new supply.”

Ontario Power Generation (OPG) serves roughly half of the province’s electricity load. A good number of its 66 waterpower stations came online in the 1950s; many are more than a hundred years old.

That’s the case with Ranney Falls, a small early-20th century station on the Trent River, which flows into Lake Ontario. Following a system-wide assessment, OPG opted to expand the facility to produce more power from the same site, explained Martelli. The utility extended the existing dam by 40-feet and built a new powerhouse—and, in doing so, literally doubled the generation capacity at the site.

A new hydroelectric turbine runner boosted Ranney Falls’ total capacity from 10 to 20 megawatts; the original powerhouse still hosts two original five-megawatt generating units that date to 1922. After receiving upgrades in 2006, its still going strong and will continue to do so, long into the future.

“The beauty and the benefit of these improvements is that we’re getting more energy and capacity from the same water. We are not disturbing the environment, we’re making use of existing infrastructure and technology improvements to squeeze out more energy,” said Martelli.

Martelli reckons that the company has achieved an impressive additional 600 megawatts of capacity at existing sites in the past 20 years, and there’s more to come: “I suspect there is at least another 500 megawatts out there waiting to be harvested in Ontario.”

Manitoba pours on the power

In 1914, the Winnipeg Electric Railway company began building the Great Falls Generating Station on the Winnipeg River to supply juice to its streetcar network. After a pause in construction following Canada’s entry into World War I, the power plant’s generator units first began humming in 1923. Today, it’s one of the Crown utility’s oldest generating stations and is still providing valuable service.

The utility began an overhaul program more than 30 years ago, explained Manitoba Hydro spokesperson Bruce Owen. “Some of our plants could be described as ‘legacy,’ and replacing these units, either in part or in whole, gives us an opportunity to introduce modern equipment that increases the amount of electricity we generate, while also keeping things safe for our staff.”

More recently, Manitoba Hydro removed and replaced unit four’s original draft tube liner, a tube mounted at the exit of a runner that receives water after passing through the turbine. The utility replaced the original unit with a higher-output turbine runner and components.

“The work required us to cut and extract 10 sections of unit four’s draft tube liner, each 30,000 pounds, via overhead crane, and replace it, too,” said Owen.

The overhaul extended unit four’s life by another 40 to 50 years, and increased power output capacity by 30 per cent, from 20 to 26 megawatts. Manitoba Hydro did similar work on unit three at Great Falls about a decade ago, increasing its output by approximately 16 per cent.

Some refurbishments call for only modest teams and equipment. Others are daunting, such as installing new turbine runners at Kelsey Generating Station, on the Nelson River, about 90-kilometers northeast of Thompson.

Manitoba Hydro built Kelsey to supply electricity to Thompson, and to mining and smelting operations in the area. The utility connected the generating station to the province’s electrical system in 1961, six years after its completion. The rehabilitation job was so extensive that the crown corporation needed to build a 60-person construction camp on site in 2006, prior to work starting.

That’s the equivalent output of a sizable new waterpower station—except, of course, no new generating station was needed to make it.

Refreshing a piece of Quebec’s history

Since 1934, when water first roared through its six massive turbines, the Rapide-Blanc generating station has reliably produced clean and renewable electrons.

In the almost nine decades that have since passed, engineers have fastidiously maintained all of Rapide-Blanc’s parts to keep the 209-megawatt station running flawlessly. But eventually, even the best-loved equipment will reach the end of its service life.

“Fifty-five per cent of our plants are more than 40 years old,” said Simon Racicot-Daignault, Hydro-Québec’s senior director of generation and maintenance. He oversees all the of utility’s generating stations and dams.

“We need to be really strategic to make sure we invest at the right time. That is going to become more and more important with the decarbonization of the grids in the United States Northeast underway,” he said.

Racicot-Daignault said that reliability is a key factor when deciding which stations to work on next. “We have a very rigorous diagnostics program, every single asset is frequently evaluated by our team,” he said. “Reliability is really key for us, especially in today’s world with the energy transition ongoing and the coming of new renewable sources.”

Racicot-Daignault believes waterpower will play a key role in decarbonization, because other renewable energy resources are variable.

Of course, the dollars and cents need to add up as well. “When we have an aging fleet like ours, we need to be confident we can do the refurbishments and still produce electricity at the same price,” said Racicot-Daignault.

Hydro-Québec has completed preliminary work at Rapide-Blanc; the big job is now underway and will continue through to 2026. Les Québecois consider their crown utility something of a provincial treasure, and widely regard Rapide-Blanc as an important heritage asset.The Rapide-Blanc project is the current focus of what will be at least a decade of refurbishments and upgrades around the entire Hydro-Québec system; the utility will complete the last of the current wave of projects around 2022.

And for all of them, the utility will be keeping social license front-of-mind. “We always look at the social acceptability of a given proposal,” Racicot-Daignault noted. “If you are [going to be] putting more water through a station, you need to make sure you have the social license to do so.”

Hydro-Québec has long partnered with the Cree in the James Bay region. “When we do an expansion, it is always in conjunction with the Indigenous people,” said Racicot-Daignault. “We are on their territory, and need to agree on how we do it, and how we are going to treat the river.”

The utility doesn’t necessarily plan on building new green field generating stations for the foreseeable future; investments in existing plants tops the list. Decisions regarding the need for more power production will be made around 2022, in accordance with local and export demand.

Meanwhile, there is a lot of work ahead, and nobody will even know it’s underway. “Ideally, you would never stop the turbine units,” said Racicot-Daignault. “As long as you run, life is good.”