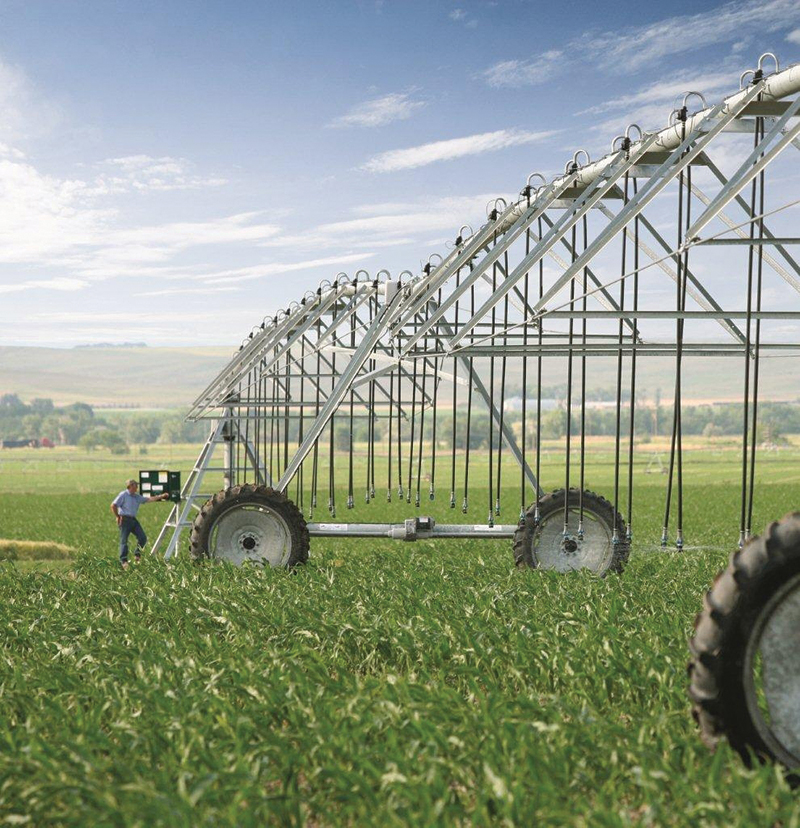 By 2030, the world’s farms will have to produce almost 50 per cent more food than they currently do. By 2050, agricultural yields will have to double. A hungry world is about to get hungrier, a dilemma that isn’t helped by increasingly scarce natural resources (water included) and urbanization. According to the Organisation for Economic Co-operation and Development (OECD), agriculture consumes about 70 per cent of the world’s freshwater withdrawals. In Canada, agriculture was the fourth largest water user in 2005, accounting for nine per cent of total withdrawals. Water is withdrawn mainly for irrigation (92.4 per cent—mainly required in the drier parts of Canada) and livestock watering (5.4 per cent).

Although agriculture’s roots are low-tech, farmers around the world have embraced new technologies that help them make better use of their resources and heighten conservation—a concept which, as natural stewards of the land, they’ve easily accepted. For example, water-scarce Israel is the home of drip irrigation, a method that allows water to drip to plant roots through a network of valves and pipes. This method is now popular throughout the world and, in combination with wastewater reclamation, has brought Israel the highest ratio of crop yield per water unit in the world.

In Australia, where irrigated agriculture accounts for about 70 per cent of all water use, farmers subject to severe water scarcity are no strangers to conservation strategies. The country’s federal government has invested AUS$5.8 billion in sustainable rural water use and infrastructure, including a program for irrigation efficiency pilot projects. The government also encourages the adoption of new technologies.

See also  What is Needed to Remove Lead from Drinking Water in Canada?

A number of improvements have been made to irrigation systems to conserve water and make its dispersion more efficient. Some farmers have adopted the use of remote water trough sensors and cameras, and every day developers are combining networks with other technologies to make their products more robust.

Nebraska-based Lindsay Corporation works with the agricultural industry to reduce their customers’ inputs and increase yields through efficient irrigation control and management. Recently, the company introduced FieldNET Mobile, an irrigation system pivot control application for smart phones that is a natural extension of its web-based program.

“Here, you can control pivots, receive info when there’s a problem, and see a visual representation of the pivots in your field,” says Dirk Lenie, Lindsay’s VP of marketing and export sales. “Customers can remotely control and monitor pivots, and save time, water and energy by adapting to changes in climate in real time. This gives farmers a tremendous amount of control.”

Fruition Sciences, winner of the inaugural Imagine H2O competition, is also trying to use computing to put control in the farmer’s hands. Focused on viticulture, or grape production, the company’s technology uses sap flow sensors to send a wireless reading of the vine’s transpiration rate—a precise measurement of how much water is moving through the vine that gives an indication of the vine’s water needs, which can be sensitive.

Outside of the vine, the technology taps into existing weather stations to capture climate data and combines it with irrigation sensors, pressure bomb readings, and BRiX test results. An online reporting tool aggregates and analyzes the data and notifies farmers immediately, by email or text message, of vine stress or weather forecasts that might require action—such as an optimized irrigation plan—to avoid yield loss.

“By bringing more science to the table, we felt we could get people to rethink the way they water, and also the way they plant and choose varietals—all of these issues are connected to sustainability and water conservation,” says Sebastien Payen, Fruition’s co-founder and chief operations manager.

Spanish researchers have taken sensors to the next level. Scientists from the University of Cordoba have developed a way to capture water stress levels with sophisticated aerial photography that, with the proper software, will be able to provide water efficiency management data for farmers. Applications in regions with similar climates, such as California, are investigating the project.

As smart phones become more pervasive, apps get smarter, and programs become more sophisticated, the combination of information, automation, and real-time tweaking is allowing farmers to make efficient choices for their crops and for water use.

But high tech isn’t always the answer. Australia, for instance, encourages new technology adoption as part of its rural water management program, but also notes that improving low-tech irrigation infrastructure may be just as cost effective as funding a significant upgrade to a more sophisticated technology.

Continued innovation is critical to meeting the needs of an increasing population, given our resource-scarce environment. However, as with water conservation and efficiency, sometimes the biggest changes come from the simplest, most low-tech solutions. Farms that make use of both traditional methods and the latest technologies will be most successful.  WC