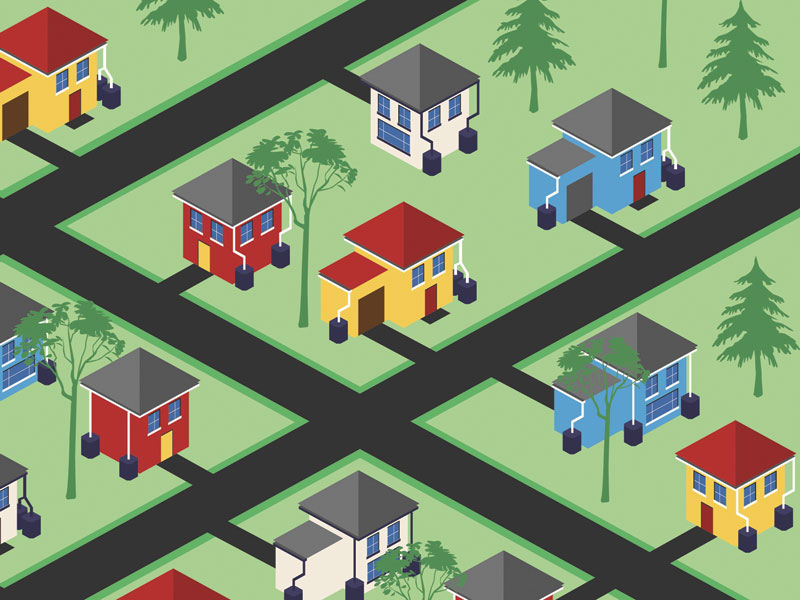 Over the past decade, integrated water management systems (also referred to as low-impact development methods) have gained momentum, with a focus on handling water at or near where it falls. These systems provide effective stormwater management with lower capital and comparable operating costs, including land and maintenance fees. The market for this type of technology is so extensive it can support multiple companies, and continued momentum in the space is already generating competitors to help break down institutional and social barriers, and further accelerate adoption of this market-disruptive innovation affectionately referred to as “rainfrastructure.”

One of the most promising systems in today’s stormwater market is Toronto-based RainGrid, the birth child of environmentalist Kevin Mercer and engineer Stephen Braun, which supplies an intelligent network of residential stormwater cisterns. By automating the traditional distributed stormwater management technology of residential cisterns with real-time sensors and internet intelligence, RainGrid has created a stormwater smart grid at half the cost of conventional stormwater storage methods.

Inexpensive and reliable information and communication technologies have been revolutionizing industries—retail, electricity, finance—for 30 years, and it’s looking to infiltrate the water sector. Integrating remote real-time cistern operations with predictive precipitation algorithms allows municipalities to capture, store, and release stormwater as close to where it falls as possible. RainGrid cisterns are emptied en masse when inclement weather is predicted, ensuring sufficient storage capacity to eliminate or reduce overland flooding and property damage without the need to super-size pipes or retention pond networks.

To compete on a level playing field with conventional system expansion or end-of-pipe technology, point-of-source technologies must be rolled out on a neighbourhood or citywide scale. Even with fairly inexpensive cisterns and intelligent controls, a RainGrid network system is still a multimillion-dollar purchase for a municipality. The infancy of stormwater utilities and the typically long sales cycle inherent in municipal purchasing has consequently hindered acceptance and growth of an innovative stormwater technologies industry. Even RainGrid, which currently supplies cisterns to the prestigious Washington, D.C. RiverSmart stormwater program, faces a long path to system acceptance and integration in both Canada and the United States.

The reliance on homeowner acceptance of new stormwater technology and willingness to house it on their property is a new business model for municipalities, adding further complexity to the sales cycle and financing of the system. While networked stormwater cisterns may be more effective and efficient from an infrastructure operations and financing standpoint, if their rate of adoption is challenging, it may prove difficult to secure project financing. It can be a hard sell to utilities to introduce not only a new technology but also a new business model.

By replacing expensive and socially disruptive rebuilds of conventional stormwater methods with distributed, point-of-source solutions, the RainGrid system inherently blurs the divide between public and private, and although not impenetrable, this is posing a barrier for adoption.

To cope with this unconventional disconnect between public and private property, RainGrid’s stormwater technology develops a public-private partnership (P3) between private property owners and their cities. Cities purchase, install, and maintain RainGrid cisterns as a municipal asset rather than expecting the property owner to purchase, install, and maintain the system. While the installation of publicly owned and managed infrastructure on private property is not a new concept, when similar business models are employed with gas lines, electricity wires, and water pipes built into homes, both the homeowner and municipality reap benefits. In exchange for hosting no-cost RainGrid network system installations, property owners receive reduced stormwater utility costs and access to stored rainfall to offset potable water demand for irrigation or internal building purposes.

Despite stormwater damage being one of the largest source of insurance claims, there remains a disconnect between a landowners’ behaviour and municipal responsibility. A general lack of knowledge concerning stormwater management challenges in society and the options available to mitigate disruptive weather further hinders the ability to finance the widespread deployment of new technologies like RainGrid.

The increased awareness and success of innovative P3s are sure to play in RainGrid’s favour going forward—as is the rapid deployment by municipalities of stormwater utilities, such as those planned for Mississauga and Aurora, Ontario. Continued climate disruption, especially extreme weather events, will rapidly raise public and decision maker demand for economical environmental solutions to climate variable stormwater management.  WC