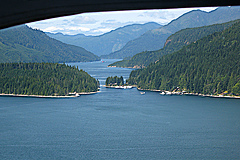 The Canadian government will contribute $1.5 million to the Water Wall Turbine’s Dent Island tidal energy demonstration project. The investment will be made under the Government of Canada’s Clean Energy Fund.

The goal of the project is to develop and deploy a 500 kW floating  tidal turbine system off the Dent Island Resort near Vancouver Island on the coast of British Columbia. Designed to harvest tidal and river stream energy, the project has the potential to become a cost-effective power generating technology that could be used around the world.

“Our government is positioning Canada as a global leader in the clean technology sector by supporting innovative projects aimed at producing and using energy in cleaner and more efficient ways,” said British Columbia MP John Weston. “The research and development generated by projects such as Water Wall Turbine’s Tidal Power Generation project will also create jobs while benefiting the environment.”