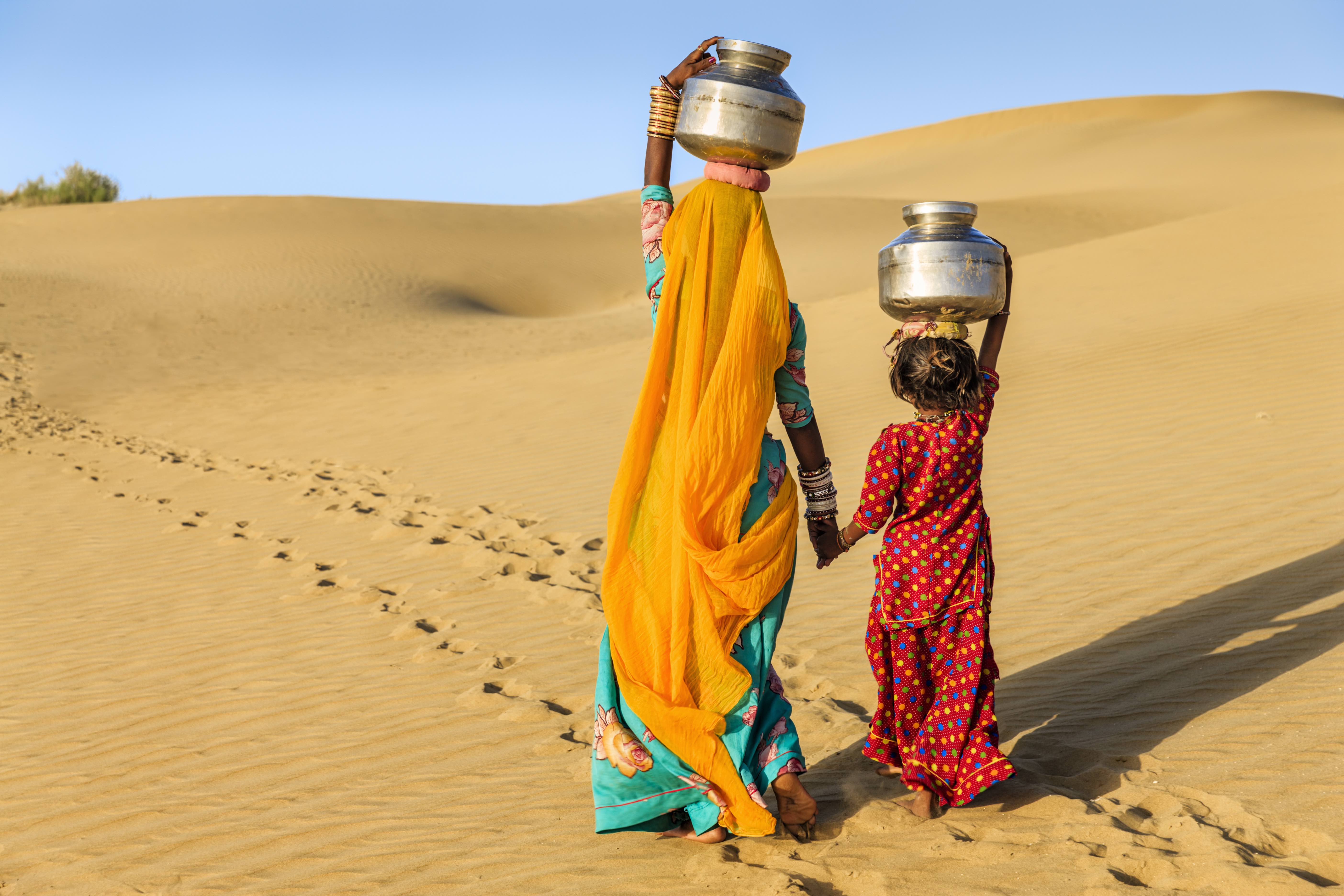 Canada has a rich history as a peacekeeping nation and a commitment to continue this legacy. However, there is a growing recognition that the nature of peacekeeping has changed, requiring a longer-term view, and some experts have suggested that water security is playing a much bigger role than ever before in achieving political stability and forging peace.

Related to these themes, the United Nations Sustainable Development Goals (SDGs) provide a framework to mobilize businesses, nations, and civil society groups to improve the world, and the SDGs have the potential to improve the stability of nations. Now, as nations and private firms get organized around achieving the UN water goals, there is an opportunity for Canada to take a leadership role based on its wealth of water expertise, history of successful governance, and community of water cleantech entrepreneurs who are already building relationships to improve water abroad.

It takes a village
Life has greatly improved in the tiny agricultural village of Jambudiyapura, about 500 kilometres west of Bhopal, India. Although most homes have had running water and outdoor bathing areas for years, until recently, the 300 community members defecated in open public spaces. The health risks of these conditions were many as greywater pools from laundering bred waterborne mosquitos and disease, and public exposure degraded peoples’ sense of dignity and safety, especially women’s.

In 2013, India’s Parliament passed legislation requiring that companies doing business in India spend two per cent of their profits on corporate social responsibility projects, so when Gujarat Road & Infrastructure Company Limited won the contract to build a toll road beside Jambudiyapura, they decided to invest in sanitation projects for the village—employing a distinctly Canadian solution.

Clearford Water Systems is a cost-effective sanitary servicing alternative to big pipe conventional sewers for smaller communities. Kevin Loiselle, president and CEO of Clearford Water Systems, said, “A key focus for Clearford in developing international markets has been finding the right local partners to help build our brand as a Canadian water solutions provider. In India, the recent corporate social responsibility regulations opened up a new avenue for partnerships with Indian corporations looking to make the most impact with their CSR dollars with water and sanitation projects in communities where they do business.”

Clearford partnered with Gujarat Road & Infrastructure to deliver an affordable wastewater sanitation system that included private toilets and bathrooms, wash stations, and sustainable wastewater collection and treatment that provided treated wastewater suitable for agriculture crops. Extensive public consultation was done to identify the specific needs of the community. A low-cost vertical soil biotechnology treatment facility was chosen for final treatment, due to its simplicity in operation and maintenance.

In order to accommodate the low water supply of 70 litres per person per day, the Clearford One system was selected for solids-free wastewater conveyance. As well, the government kicked in funds to sustain the operation for 15 years. Now the villagers are the envy of many communities in the region, and on March 7, 2017, over 100 women village leaders—Sarpanches—came to see the Clearford One sanitation system in Jambudiyapura. The community was a proud host.

“What Canadian companies can offer is the reliability of our homegrown solutions, which may not be the most technically advanced, but are thoughtfully developed to serve their purpose of providing safe drinking water and protecting health and natural water resources from wastewater pollution,” said Loiselle. “The world knows Canada for its vast, clean environment, high quality of living, and reputation as a reliable and peaceful nation—and these brands will continue to support the position of Canadian companies globally as long as we maintain those ideals at home.”

Global business case
The health risks that Jambudiyapura once experienced are not unique to rural India—they are pervasive globally. According to the World Health Organization, it is estimated that 2.3 billion people around the world have no access to safe, clean toilets, and where there are sanitation facilities, the waste is often not safely managed. The cost in lives is enormous—an estimated 280,000 deaths every year. These health risks and challenges related to the accessibility of clean drinking water, especially in regions with transboundary water challenges, are present and often lead to political instability, and in the worst situation, conflicts.

Jean Chrétien, the former Prime Minister of Canada, is also a past co-chair of the InterAction Council (IAC), a group of 40 prominent former government leaders and heads of state established in 1983 focused on the problems confronting humanity. At a September 2013 meeting of the IAC, Chrétien called on the UN Security Council to recognize water as one of the top security concerns facing the global community. Chrétien said, “The future political impact of water scarcity may be devastating […] Using water the way we have in the past simply will not sustain humanity in future.”

Although Chrétien’s term as co-chair ended in March, the ideas he put forward have been sustained by other Canadian leaders, such as Francis Scarpaleggia, chair of the Liberal Caucus; Thomas Axworthy, who served as principal secretary and chief speechwriter to Pierre Trudeau; and a new Canadian alliance of research institutions and organizations that collectively support a Canada-based international secretariat for the new Water Decade. Although technology is only one part of these leaders’ bid to encourage federal leadership on global water security, there is a strong business case to be made that aligns with many of the government’s existing priorities.

Empowering feminism
Clearford’s success in collaborating with female leaders in India highlights an important dimension of the water SDGs that Canada has committed to through its global humanitarian efforts. The federal government has emphasized that enabling women and girls as agents of change will help transform societies; and the federal government’s 2018 budget has pledged $2 billion over five years to increase “feminist” international aid, as well as $1.4 billion to support female entrepreneurs. This direction may prove to be crucial, not only because of the merits of a feminist approach but also because greater coordination will be necessary to achieve global success.

See also  Savings at the Pump

Millie Adam is the director of International Partnerships with the Centre for Affordable Water and Sanitation Technology (CAWST), a Calgary-based charity and engineering firm that has been disseminating knowledge and developing capacity on non-networked water, sanitation, and hygiene (WASH) solutions with government agencies and local partners since 2001. It has successfully helped deliver over 1,300 decentralized water systems in 84 countries, and through this work, has developed an astute understanding of gender roles related to water, sanitation, and hygiene (WASH). The CAWST website states: “Developing women’s capacity to fully participate in the provision, management, and safeguarding of water not only works toward closing gender gaps but also leads to better results for WASH programs.” Adam helped to secure CAWST’s first CIDA (now DFATD) funding and managed its successful execution. Adam said, “I think Canada has a responsibility to support the SDGs. Water affects us all and the Sustainable Development Goals are a call to action to ensure a healthy future for our people and our planet. Safe water is not simply a nice-to-have, it’s a need-to-have.”

Although CAWST provides low-cost water filtration technologies and infrastructure as the backbone of their programs, it is the capacity-building side of the equation where they really help. “Capacity-building is explicitly identified as one of the primary means of implementation, particularly for water and sanitation. […] The water SDG is only achievable with a balanced investment in infrastructure and capacity-building. Adam noted that Canada is ideally suited to deliver upon the need to build capacity, based on a strong legacy of development relations and knowledge. “Canada has been a world leader in water, sanitation, and hygiene going back to the 1970s.”

Demonstrated success
Michael O’Connor, CEO of Rainmaker Worldwide, is another example of a growing number of Canadian entrepreneurs who are successfully leveraging Canada’s strong reputation as a partner for business in achieving the greater good. O’Connor’s publicly traded company exports two technologies: an Air-to-Water solution that can produce up to 20,000 litres of clean drinking water per day per unit from the air; and the Water-to-Water technology, designed to produce up to 150,000 litres of drinking water from brackish or contaminated water, powered by decentralised  renewable electricity.

“In my experience travelling globally for three decades, it is very advantageous that Canadians travel with relative ease and are generally recognized for their unwavering commitment to global development,” said O’Connor. “Those countries that suffer the most from water scarcity are those that not surprisingly express the greatest interest. Unfortunately, the deployment of technology in these countries is incredibly difficult for a range of widely known barriers.”

Brand Canada
Even if Canadian water technologies have a proportionately smaller presence in developing nations than some powerhouse technology nations like Singapore or Israel, that presence is growing. Water Canada called on the help of Brian Chau, associate with Norton Rose Fulbright to conduct a search on patent claims filed by Canadian firms for technologies that relate to water. The results in Figure 1 show a sharp increase in claims, from just over 500 in 2001 to over 1,000 in 2015. 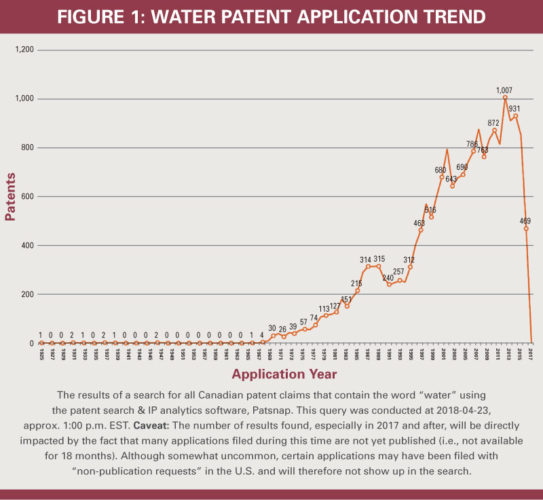 Raad Seraj, is a senior analyst of client engagement with Ontario’s Water Technology Acceleration Program (WaterTAP), an Ontario organization that works with emerging and established technologies to help accelerate their growth. Seraj said, “Ontario is recognized all around the world not only as a center for freshwater stewardship, but also research and innovation in this space. So, automatically any country or anybody who’s trying to address the SDG goals looks to Ontario for solutions.”

Seraj noted that meeting the SDGs both domestically and abroad will require leadership and coordination of experts across multiple disciplines. “Not only technology partners, but regulators, national policy coordinators, even the UN and large corporate water,” he said.

“It’s not that we’re not doing anything about [the SDGs],” said Seraj. “It just hasn’t been framed the right way.”

In the 2017 book entitled Ingenious: How Canadian Innovators Made the World Smarter, Smaller, Kinder, Safer, Healthier, Wealthier, and Happier (Signal Press), authors former Governor General David Johnson and University of Waterloo Chancellor Tom Jenkins make the point that Canada has a strong legacy of innovation and invention. At a July 2017 event in Johnson’s hometown of Waterloo, Jenkins said, “Canadians are one-half of one per cent of the world’s population, but account for five per cent of the world’s patents, refereed publications, and white papers.” Jenkins and Johnson’s theory is that Canada’s vast and variable geography, our constant flux and diversity, and global connectivity makes us uniquely positioned to be innovators. “Canada is a social invention, it is a society built on the principle that diversity can work, which is a rare and wonderful thing in the world today,” said Jenkins.

When it comes to water, Michael O’Connor agrees: “The diversity of Canada’s geography and industrial perspectives together with the long history of innovation in water technology certainly provides a unique perspective and experiences that can be shared internationally.”

On June 20th, O’Connor will join Canadian experts to discuss how Canada can help accelerate the UN water Sustainable Development Goals as part of the program of the 9th annual Canadian Water Summit in Vancouver.