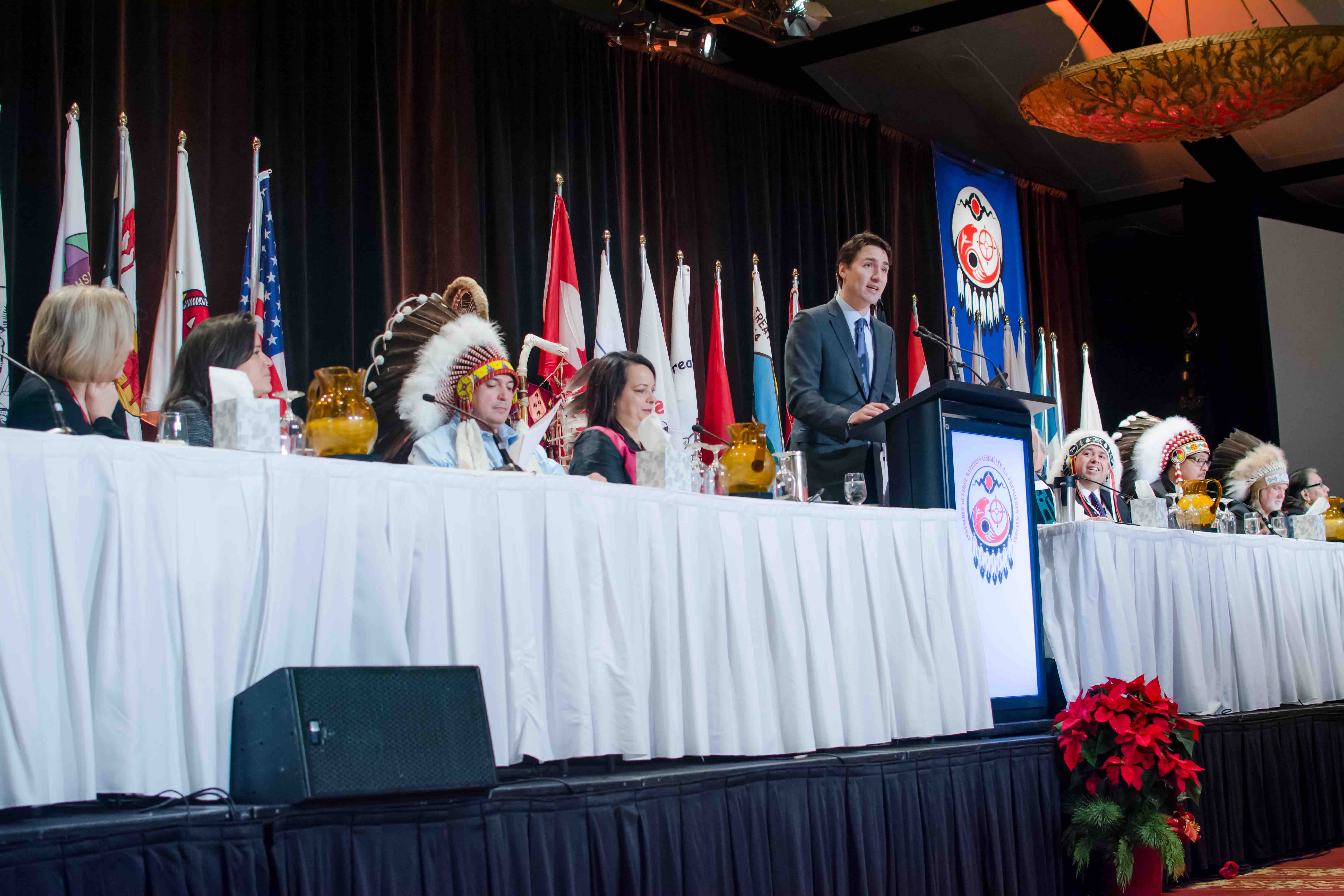 In 2005, when half the people living on the Kashechewan First Nation reserve in Northern Ontario were evacuated following an E. coli outbreak in the drinking water supply, the plight of First Nations communities living under boil-water advisories was made visible. Since then, several high-profile media stories have shone a light on this issue, including former national Chief Shawn Atleo’s appeals to Prime Minister Stephen Harper and demands made this past fall by the Neskantaga First Nation after they entered their 20th year of living under a boil-water advisory. These stories have left many Canadians wondering, “Why can’t we get clean water to First Nations people?”

In the 10 years since the Kashechewan crisis, the federal government has launched its Plan of Action for Drinking Water in First Nation Communities (2006), followed by the National Assessment of First Nations Water and Wastewater Systems (2009) and bills S-8 and S-11—culminating in the Safe Drinking Water for First Nations Act, which came into force in November 2013. Under this legislation, a process was initiated to develop drinking water regulations in each region that would become legally binding. And now, in 2016, Prime Minister Justin Trudeau has pledged to eliminate drinking water advisories in all First Nations communities within five years, with a specific promise to help fund a new water treatment plant for the Neskantaga First Nation.

In December 2015, however, at its Special Chiefs Assembly, the Assembly of First Nations (AFN) passed a resolution asking for the government to repeal this act. As a primary measure, the AFN is advocating for the necessary funding to eliminate drinking water advisories. However, the AFN resolution also calls on the federal government to revisit the report of the 2006 Expert Panel on Safe Drinking Water for First Nations—a document containing recommendations that were to be the basis of all future planning but were somehow lost.

One step forward, two steps back

Julie Abouchar, a partner with Willms & Shier Environmental Lawyers LLP, served as an advisor to the 2006 federal panel. She explained that there are currently no legally binding standards for the provision of drinking water on reserves. After the Walkerton tragedy in May 2000 (when seven people died from a contaminated water supply), all Canadian provinces brought in legally binding standards for drinking water. But reserves are governed by federal laws, not provincial laws. “The federal law has no standard, just objectives—which was the same situation in the provinces before Walkerton,” Abouchar said.

Established by the (then) Department of Indian Affairs and Northern Development (IAND) with the support of the AFN, the expert panel’s mandate was to consider options for a regulatory framework for First Nations communities located on reserves. (The Conservative government changed IAND to Aboriginal Affairs and Northern Development Canada, AANDC, in 2011. The recent Liberal government has since changed the name to Indigenous and Northern Affairs Canada, or INAC.) While the panel proposed several options, they stressed three conditions necessary for any plan to succeed: close the resource gap, hold discussions with First Nations, and deal with high-risk communities immediately. According to the AFN and Abouchar, it is precisely these conditions that are missing from the current legislation. Moreover, the way the federal legislation stands, said Abouchar, “If regulations came into force, chiefs and councils would be immediately liable—without having first been given the capacity to provide safe drinking water.”

Getting up to standard

Chief Shining Turtle (Franklin Paibomsai) of the Whitefish River First Nation in Ontario is a civil engineer with the Ontario First Nations Technical Services Corporation. He chairs a task force currently reviewing the technical elements of the existing legislation for the AFN. He said that understanding why the drinking water situation is so dire requires an understanding of the history of infrastructure planning. “In the mid-1980s, the government began devolving services to First Nations,” he said.

“They knew about the challenges, and decided to unload them. But they did not accompany this devolution with the resources and training required to build the necessary capacity.”

In some cases, this lack of capacity was as literal as the pipes in the ground. The chief explained that while current Ontario regulations state that drinking water systems must have a capacity of 450 litres per person per day, the systems on reserves were built for only 180 litres per day—because of a decision made by the federal government decades ago. Bringing systems up to the current standard would require ripping up all the pipes and starting over. “All these systems have failed because they’re undersized to begin with, because of a deliberate management practice by the Department of Indian Affairs,” the chief said. “Where in the nature of humanity does an Indian drink less water than a white man?”

A study published in the Canadian Water Resources Journal in September 2015 estimated that between 2001 and 2013 about $2 billion was invested to improve drinking water on First Nations lands. Chief Shining Turtle said that while to the general public this may sound like a considerable investment, it has hardly been enough to cover the costs of building, operating, and maintaining water infrastructure in the 633 bands across the country—many of which are in remote areas. A 2011 assessment by DINAC (now INAC) determined that $4.7 billion would be needed over the next 10 years for First Nations water and wastewater systems to meet INAC protocols.

See also  One Size Does Not Fit All

Under the 2013 Safe Drinking Water for First Nations Act, the federal government was to develop regional regulations. They started with the Yukon and Northwest Territories, where there was essentially only one community under federal jurisdiction. Then they worked with the Atlantic Policy Congress (APC), which supported the process in the Maritimes.

John Paul, executive director of the APC Secretariat, said his team submitted a detailed proposal for regulations to AANDC about two years ago. “The information that we provided basically fell into an abyss. […] We haven’t received any kind of formal response.”

Paul agreed that any regulations will need to be backed by financial resources. His engineers have estimated that their region alone (First Nations communities in Atlantic Canada) would require an immediate investment of roughly $225 million just to bring the drinking water systems up to standard. It appears, however, that federal work to develop regulations stopped because of the opposition faced in other regions.

“I was involved in those engagement sessions, and it was not consultation,” said Irving Leblanc, special advisor to the AFN on housing, water, infrastructure, and emergency issues management. “There was no respect for water or for First Nations processes and beliefs.” He described how chiefs in the various regions cut short or monopolized meetings with traditional ceremonies to voice their discontent. In Alberta, he said, while the chiefs initially supported the process based on their discussions with government officials, they later rescinded their support because those talks were not honoured. The AFN Resolution on Safe Drinking Water also states that the current legislation does not reflect First Nations’ customary laws regarding water. In fact, the 2006 expert panel had recommended that the importance of customary law be set out in the federal statute preamble.
“Going across the country, we heard a lot of individuals say they have indigenous law that they want to apply to water,” Abouchar said, recalling the panel’s process. “Our recommendation was that the federal government take into account, however it can, those indigenous water laws, and the cultural perspective on water.” Although it’s unclear exactly how this would work in practice, she believes proper consultation on any federal statute would be a good starting point.

See also  Exercising the Human Right to Water and Sanitation

In a water regulation development status update issued at the end of January 2016, INAC wrote that Minister Carolyn Bennett of Indigenous Affairs and Northern Development has been directed “to undertake a review of laws, policies and operational practices in partnership with First Nations,” and that work on developing water regulations is “on hold while it is determined what the review will cover and how it will be carried out. This provides an opportunity for First Nation stakeholders to share views, concerns, and priorities before any further work is done.”

The document puts forth several issues to consider, including whether legal, enforceable standards for water and wastewater are needed to help safeguard communities in the future; and if so, what should be considered in developing them and who should be involved, and the possibility of alternative mechanisms to protect the health and safety of First Nation residents when it comes to water and wastewater.

Earlier, in response to Water Canada’s request about the regulation development process, INAC reiterated the government’s commitment to “a renewed, respectful, and inclusive nation-to-nation process.” The email further stated, “The Government of Canada has committed to address and resolve Drinking Water Advisories on First Nations lands in five years and is now examining how it will move forward on eliminating long-term drinking water advisories.”

Leblanc, who will work with the various parties involved to further the resolutions passed at the AFN Special Chiefs Assembly, said it’s too early to say if all this goodwill will translate into concrete action on the ground. “Everyone is waiting to get direction, waiting for the budget.”

Chief Shining Turtle takes hope from the new prime minister’s attitude—Justin Trudeau spoke in person at the AFN Special Chiefs Assembly in December 2015—but said the task before him is huge. “They have to go back and engage with people. Visit communities, see what’s working, what’s needed, the real costs. Then come up with a plan.”