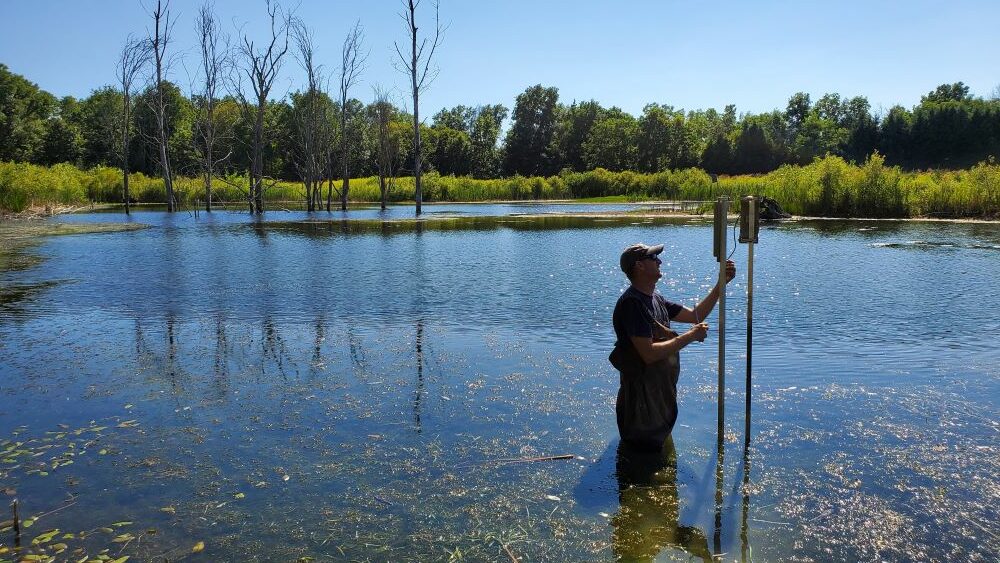 Decisions made today at every level of government and civil society will determine the future of summer holidays and day trips to local lakes in Canada. Hundreds of ponds, rivers, and lakes are increasingly impaired each year by algal and cyanobacterial outbreaks that affect more and more watersheds.

Changes in climate, combined with land pressures and agricultural drainage, are adding up to earlier and more frequently favorable conditions for algae overgrowth. These outbreaks can produce dangerous levels of toxins and use up oxygen at the expense of other aquatic wildlife, including fish.

We know there is an efficient and relatively inexpensive solution for chronically sick lakes that can be implemented at individual and community scales. Research consistently shows that habitat restoration protects water quality in working landscapes. Specifically, large-scale restoration of wetlands has the power to substantially reduce nutrient levels flowing downstream into our rivers and lakes.

Lake Erie in southwestern Ontario is one of three chronically sick Canadian lakes that are monitored by satellite for EOLakeWatch, the Government of Canada’s algal bloom reporting system. It’s a relatively shallow lake that receives high levels of nutrients, washed away from mainly non-point sources such as fields and lawns. Every year, Lake Erie coughs up harmful blooms that threaten the drinking water of 12 million people in Canada and the United States.

In recent years, Ducks Unlimited Canada (DUC) has led hundreds of wetland conservation projects on private and public lands in the watersheds north of Lake Erie. The program is part of a strategy in the Canada-United States Great Lakes Water Quality Agreement that’s intended to reduce phosphorus loads washing into the lake.

Pascal Badiou, PhD and  fellow scientists from DUC’s Institute for Wetland and Waterfowl Research conducted a study of newly restored small wetlands on the Ontario agricultural landscape. According to Badiou, “The overall goal was to quantify nutrient retainment under different hydrological conditions in new small wetlands—those that have been restored within the previous five years.”

Based on this, the team developed a peer-reviewed protocol for monitoring and assessing the recently restored small wetlands. Through the Ontario program, they connected with rural landowners with new “edge-of-field” wetlands set in a low-lying area that receives runoff from the surrounding agricultural landscape.

Bryan Page, lead author of the study report, Determining the Nutrient Retention Capacity of Newly Restored Wetlands in Southwestern Ontario for a Second Water Year, explains that many factors influence a wetland basin’s ability to retain nutrients, and capturing all facets of those interactions can be complex. That makes each study important to the gains of broader understanding of wetland habitat restoration.

The Lake Erie study showed that the newly restored wetlands retain nutrients, such as phosphorus and nitrogen, in all four seasons and under a wide range of conditions. “We were lucky in that the field research took place over two very distinct hydrological years with notable weather events for comparison among sites,” Page said.

For the most part, the study wetlands efficiently captured nutrients, including soluble reactive phosphorus (SRP), a bioavailable form of phosphorus that increasingly impacts water quality in Lake Erie and makes up a large proportion of the overall phosphorus load. The mean total of phosphorus retained was 11.7 kilograms per hectare, per year. These levels are well in line with other relevant studies in freshwater wetlands.

“There’s a metric called the phosphorus assimilation capacity for how much phosphorus a wetland can assimilate and lock away,” said Page. “A freshwater wetland in North America should be able to assimilate 10 kilograms of phosphorus per hectare, per year, and that’s really close to what we found is being retained in our wetlands on average every year.

“What’s important about that is that even though we’re putting phosphorus into these wetlands and it’s being retained, there’s a really good chance that most of that is being assimilated and locked away so that the ecological integrity really isn’t being hampered.”

Page points out that the basins in the study are designed for waterfowl based on earlier research by DUC. “We saw through trail camera recordings that breeding waterfowl pairs and other wildlife do use these basins. And these basins are providing society with water quality benefits as well. This is taking place even though they’re not optimized whatsoever for water quality benefits.”

The findings caught the attention of DUC colleagues at Ducks Unlimited Inc. in the United States. Badiou and his team are now collaborating with his American counterpart, Ellen Herbert, PhD, and the research has moved to the south side of the lake.

“Lake Erie has experienced repeated algae blooms that shut down fisheries and beaches and impact drinking water for millions of people on both sides of the border,” said Herbert. “Like birds, water doesn’t respect boundaries.”

Nutrients enter water in runoff from landscapes as water flows downstream. A large lake receives nutrients from its entire watershed, which can span multiple provinces and states.

The work is moving forward with big questions about strategic habitat restoration on working landscapes. DUC’s academic colleagues at the University of Waterloo are taking the data from both studies and modeling targeted restoration scenarios that can help optimize the power of small wetlands.

Everyone can participate and benefit from wetland restoration. It’s supported by the insurance industry as part of extreme weather mitigation. It’s carried out by farm landowners as part of an environmentally responsible farm plan. It’s implemented by municipal drainage engineers as part of an agricultural drainage strategy. The eight landowners who allowed their wetland restoration projects to be part of the nutrient study are prime examples of how people can take up the challenge of protecting their own communities.

Restoration returns effective natural infrastructure (i.e., wetlands, grasslands, forests, waterways) to the land. DUC has collaborated directly with many communities to restore and create highly functional wetlands that support cleaner water—building the case that communities can heal their own lakes when they come together to restore the lost functions of wetlands in their watersheds.

A future of strategic wetland restoration can meet and match priority setting for clean water, biodiversity and people. Individual decisions—from private landowners, local decision makers and water professionals—can make the difference between a future of plunging into a lake’s welcoming waves and one restricted by the dangers of “sick” lakes and their frightening impacts on people, pets, livestock and wildlife.

Wetland restoration offers hope for improved water quality even for areas where most of the natural wetlands have been destroyed.

For years, DUC has been demonstrating the wide range of functions that wetlands can provide in both rural and urban landscapes, from naturalized wastewater lagoons, naturalized stormwater settling ponds, bioremediation and naturalized stormwater retention basins. For further reading on some of the work DUC is doing visit www.watercanada.net/duc-wetlands-work.

Julie Pollock is an environmental writer and communicator for Ducks Unlimited Canada.