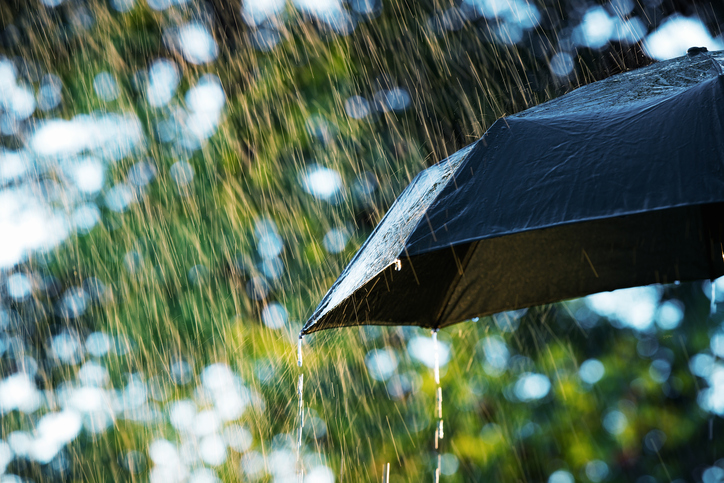 Onto each city, some rain must fall. But we can be smarter about how we deal with it. Most of the time stormwater is treated as a nuisance or a threat, something to be quickly swept away and dumped into rivers or lakes so that it doesn’t end up in our basements. But what if, instead, that water was treated as a resource, to be captured and put to use along that path to the lake?

That’s going to require a major change in attitudes, said Kevin Mercer, founder of the RainGrid smart rain barrel company. The cheapest and cleanest way of dealing with rainwater is to capture it at the source, but “engineers are completely obsessed with the end of the pipe,” he said.

But capturing and using rainwater before it gets to the end of that pipe means that cities will no longer need the huge, expensive engineering solutions that they currently have to build to ensure their citizens stay safe and dry, said Steven Peck, founder of Green Roofs for Healthy Cities, the green roof industry association.

The principle behind a green roof is that instead of shedding water into a storm drain, a building should collect and retain as much rain water as possible and use it to grow plants. “We’re not going to solve every rain event, but it should be the first line of attack,” he said. “We start with the roof and work our way down the walls to the ground and the streets. By the time we get to the drain, we’ve dealt with most storms that hit Canadian cities.”

The plants have multiple benefits: cleaning the air, helping to reduce the urban heat island—“like air conditioning for the outdoors”, said Peck—and even providing food.

The most advanced buildings are ones that meet the standards set out in the International Living Future Institute‘s Living Building Challenge—they capture and reuse all water, including grey water, and have no connections to the water or power grid. “A living building is supposed to be like a tree,” said Peck. “It’s the ultimate in the green building movement, and the direction we need to go in.”

There are no certified living buildings in Canada yet, but the Vancouver Convention Centre and Toronto’s Bridgepoint Health Centre, with their large green roofs and carefully managed water systems, demonstrate how we can move in that direction.

The problem with green buildings, though, is that it is up to the building’s owner to decide that they want to go green—and for the most advanced buildings, that decision should be taken before the design even begins. Cities need a way to deal with huge numbers of existing building that can’t, or won’t, go green.

Mercer’s RainGrid system may be one way to do that. It creates a network of internet-connected rain barrels at houses all over town, which keeps track of how much space is left in the barrels and monitors the weather, so it can automatically empty them out before a storm arrives. “RainGrid takes the typical practice of residential rain harvesting and brings it into the Internet of things era,” said Mercer. “It takes dumb rain barrels and makes them smart.”

The problem is, cities are wary of working with infrastructure that crosses the invisible line between public and private property. “Dealing with private property is the last frontier,” said Mercer, “because people can’t always be relied upon to maintain equipment.”

A smart system like RainGrid could help change that, by creating a partnership between the municipality and the homeowner. The city gets reliable rainwater control right at the source, and the homeowner gets a source of free water to use on their property, that they can control from their phone.

The rise of smart devices and the Internet of things is what will make this transformation possible, says Mercer. “Green infrastructure is now smart, reliable, measurable, and effective,” he says. “Intelligent, distributed infrastructure is the way cities will go in the future.”

Peck agrees. Changing the way that we deal with rain can help change our cities for the better. “We can use stormwater as the means to build infrastructure that has sustainable benefits,” he said.

Brian Owens is a freelance science journalist based in New Brunswick.