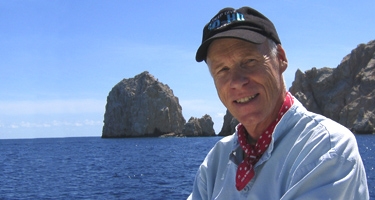 “Water has been my life in a different way than for most people. I have lived inside of it.” In 1969, Dr. Joe MacInnis, one of the world’s foremost underwater explorers, installed Sublimnos—the first underwater habitat under ice—in Lake Huron at a depth of ten metres. The “underwater classroom” operated throughout 1969 and 1970, and included 10,000 all-season dives by students, divers and scientists. “Once you’re inside a water ecosystem,” says MacInnis, “it gives you a totally different sense of water’s importance. You hear things and feel things that you don’t get from the surface.”

MacInnis spent three decades studying the physiology and psychology of people working under the sea. Between 1964 and 1994, he led thirty expeditions and logged more than 5,000 hours in the Great Lakes and the Atlantic, Pacific and Arctic Oceans.

CWT: I was just watching a great clip from CBC’s program Telescope from 1971. In it, you say that your love of the sea was born in the space of a few hours, and ever since, it’s been a continuous commitment. After over fifty major undersea expeditions, what do you want people to know about water and oceans?

Dr. Joe MacInnis: The most important thing is that all life hinges on water. When we study Mars right now, they’re looking for water because they know that there is no life without water. I’ve been very fortunate to work with NASA and on [James Cameron’s film] Aliens of the Deep. There were some wonderful scientists with us—young and vigorous and brilliant. Every one of them agreed that water is the essential ingredient—water and life are inextricably linked. Once you understand, you come away with a new reverence for water.

Water is one of the oldest, least changed and largest physical features on the planet. If you think of oceans, which covers 70 per cent of the surface of the earth with an average depth of 4,000 metres—you get a sense of the age and the dimensions of this water planet.

CWT: I’m looking forward to your talk at WaterTech in Banff in April. As an inventor yourself, why do you think it’s important to inspire water technology entrepreneurs?

JM: In Canada, we have 15 per cent of the world’s water. There’s a tendency to take it for granted. This is why I’m looking forward to coming out to talk to the water treatment group: they get it. At the heart of their technologies, there’s a deep understanding of water, and how important it is to us.

The working title of my talk is Deep Water: Deep Leadership. In my presentation I’m going to talk about some individuals and events that have informed me about leadership.

CWT: What are you working on right now?

JM: My next book will be called Deep Leadership: 12 Essentials. It’s for young people and consists of leadership lessons from people who lead dangerous lives. I’m writing about marine scientists who use $20-million subs to explore the world’s greatest depths, and the astronauts constructing the first space station. Deep leadership is a rare dimension of character because it’s exhibited by people who work in life-threatening environments.

CWT: You also assisted in the research and writing of Canada’s first national ocean policy. What issues and threats to the world’s water concern you most?

JM: 1) Climate change. It’s coming in the form of more category five hurricanes, melting of polar ice caps, and most simply from sea level rise. We could, in this century, see sea levels come up a metre. I’m concerned about that as a water phenomenon. To solve these problems we need leadership.

2) Overfishing of oceans. Because of industrial overfishing and other activities, 90 per cent of the species that we have depended on for hundreds of years are astonishingly depleted. This bounty of protein has been decimated in the last few decades with huge implications for the human family.

3) Clean water. Untold billions of people don’t have clean water to drink. How fortunate we are in Canada to have groups who work at this problem all the time.

CWT: How can we address these concerns? What are some of the things we need to do to protect our oceans?

JM: Well, we know now what the problems are, but we need more leaders to help solve them. Barack Obama is a shining example—he’s astonishing. There are lots of young people in Canada who are idealistic, and believe they can make a difference. We need to encourage these people.