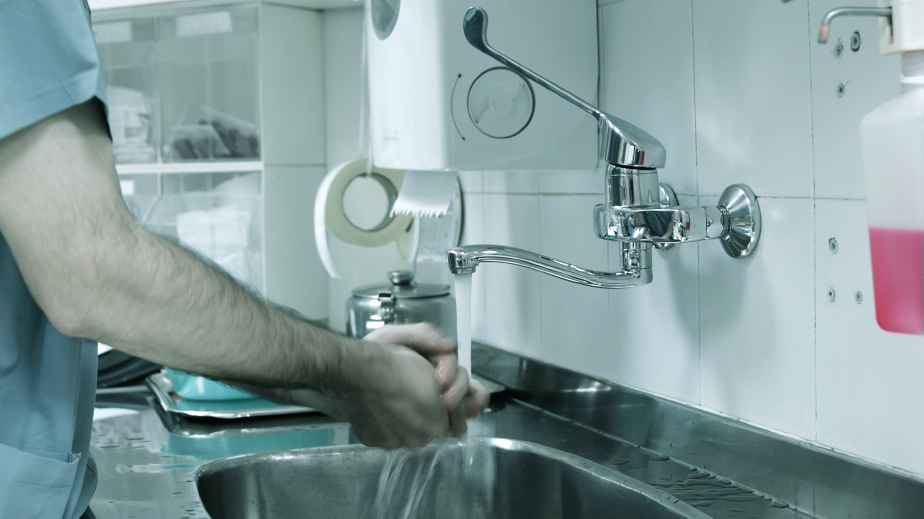 Hospitals are ground zero for healing the sick, curing disease, and saving lives. So it is unsettling to think of hospitals as less than exemplary stewards of air, land, water, and potentially contributing to human illness. The expression “physician heal thyself” comes to mind as health-care facilities strive to become enlightened users of water and energy and resourceful at managing and limiting toxic emissions.

Gary Cohen was writing a guidebook for grassroots environmentalists in the 1990s when he noticed some hospitals were burning their own garbage and emitting dioxins, mercury, and other pollutants. Realizing hospitals were among his country’s worst polluters, Cohen helped start Health Care Without Harm, which joined a broad nationwide movement that saw the number of incinerators decline from 4,500 to roughly 70 within a decade.

A typical challenge, Cohen recalls, involved a Detroit hospital that closed one incinerator in a relatively affluent suburb yet maintained another in an inner-city neighbourhood. “They had an asthma awareness program and we asked if they were aware how absurd it was that they were raining toxics down on their neighbours at that very same time,” Cohen said. “It seemed crazy that health-care providers were so out of touch with their own environmental footprint that they were actually contributing to disease in the service of their mission.”

Another early success was phasing out mercury in thermometers and blood pressure measuring devices. Health Care Without Harm asked a leading manufacturer to switch to mercury-free alternatives it was already producing.

“We pointed out the enormous environmental contamination,” Cohen said. “Mercury being taken up in fish, pregnant women eating the fish, and kids being born with enough mercury in their bodies that it was impacting their brain development.” Rebuffed by the manufacturer, Health Care Without Harm spent a decade steering demand toward safer devices. More recent legislative victories in Europe and a global treaty calling for a full phase-out by 2020 has energized the organization’s mission to heal health care.

“Hospitals and the health-care sector represent 18 per cent of the (U.S.) economy and are major consumers of fossil fuels, toxic chemicals, and industrial agriculture,” said Cohen, who as president has steered his organization to adopt a collaborative approach with other health-care institutions rather than pointing fingers. “Given that hospitals operate within the Hippocratic oath to do no harm, we’ve been able to leverage their economic clout and their mission to clean up their own house,” he explained, outlining a current effort to help facilities adopt clean energy, reduce waste, procure green products, and source food free of antibiotics and other additives.

The Canadian Coalition for Green Health Care, a key partner, is similarly engaged north of the border. Formed in 2000 by a repertoire of health-care organizations, the coalition helps facilities reduce their footprint. Executive director Linda Varangu recalled an assignment that predated the coalition to assess the disposal of biomedical waste.

“There wasn’t a standard at the time,” she explained, adding that her research exposed her to a broader picture. “You’d visit a hospital and be exposed to cleaning chemicals that were potentially not that nice. Patients would have disposable products used on them and their hospital food. I saw huge potential for making positive change.”

Coalition members now account for 40 per cent of hospital beds in Canada. “Every facility is on its own timetable and is unique in what it can and cannot do,” Varangu said. She acknowledged that greening operations can be challenging when budgets are tight. However, the coalition has an ace up its sleeve—the efficient use of water, energy, and other resources can reduce long-term costs.

As director of environmental compliance, energy, and sustainability with the University Health Network (UHN), Edward Rubinstein oversees four merged hospitals in downtown Toronto and knows it’s difficult to change old practices. “Hospitals are big and a lot of them are old,” he said.

“They’re energy intense, with high ventilation requirements, so that’s been a major focus. We’ve also reduced our consumption of water.” UHN has also been prodded from outside. A City of Toronto sewer use bylaw mandating pollution prevention planning “encouraged us to better document chemicals being brought into our organization so we could figure out where to focus our attention,” he said, adding that UHN has scrubbed some chemicals, including nonylphenol etholxylates, which are used in industrial laundry detergents yet are bioaccumulative and toxic to aquatic organisms.

While hospitals across North America have made considerable if inconsistent strides to pacify local sewer systems, no mechanisms exist to prevent pharmaceutical residues from being flushed down the drain when patients shower or use the bathroom. Pharmaceuticals in waterways are a long-standing concern.

In 2011, Water Canada reported on research by Dr. Sébastien Sauvé at McGill University, who examined the brain tissues of brook trout exposed to a mixture of St. Lawrence River water and treated effluent from the City of Montreal. Looking for biomarker signs from antidepressant and antipsychotic medications, team members measured a slowed response in the brain tissue when exposed to the effluent. More recently, in 2014, researchers measured trace levels of metformin, ranitidine, and hydrochlorothiazide in southwestern Ontario waterways, and an Environment Canada assistant deputy minister disclosed to a senate committee that more than 165 individual pharmaceuticals and personal care products had been found in water samples nationally.

Wayne Parker, professor of civil and environmental engineering at the University of Waterloo, has characterized effluent from hospitals and long-term care facilities and found pharmaceutical levels from institutions fractionally elevated over amounts in regular sewage. However, washrooms and bathing are unavoidable, so he said the best approach is properly disposing of surplus medications and prescribing only when truly needed. There’s also the question of whether to treat institutional wastewater at-source before releasing it to the sewer system or discharging it directly.

“Sewage treatment plants will remove some compounds,” Parker said. “Acetaminophen is relatively well biodegraded in sewage treatment, but some other compounds don’t tend to be very well removed in traditional plants.”

Health Care Without Harm’s Gary Cohen said a couple hospitals in Europe use constructed wetlands to filter their greywater prior to discharge into municipal systems. In North America, Kiowa County Memorial Hospital in Greensburg, Kansas, uses bioswale filtration to address impurities in rainwater and in laundry, shower, and lavatory greywater. Providence St. Peter Hospital in Olympia, Washington, uses natural ponds to filter stormwater and has also cut its water consumption by 60 per cent over the past decade. However, facilities director Geoffrey Glass said filtering wastewater is costly and wouldn’t offer the kind of long-term cost savings achieved by reducing water and energy consumption.

“It would be a huge expense, and we have a very sophisticated sewage treatment plant in our water district,” he said. “It would have to be mandated by a water authority before we would elect to do it.”

“There are some real leaders who have undertaken great initiatives, and others who still need help,” Varangu said. Cohen sees the road ahead as continuing the same struggle—getting across the message that health care isn’t just about treating people with chronic disease, it’s about supporting healthy communities. “It’s a transition from a sick-care system to more of a community wellness strategy—that’s a huge challenge.”

—Saul Chernos is a regular contributor to Water Canada

SIDEBAR: Half-Life – While Canadian hospitals generally return leftover medications to the pharmacy for disposal, trace amounts end up in waterways through municipal sewer systems. The situation with radioactive materials used in nuclear medicine is somewhat the same >> read more.

Food and Beverage Sector Demand for Treatment to Reach $336M