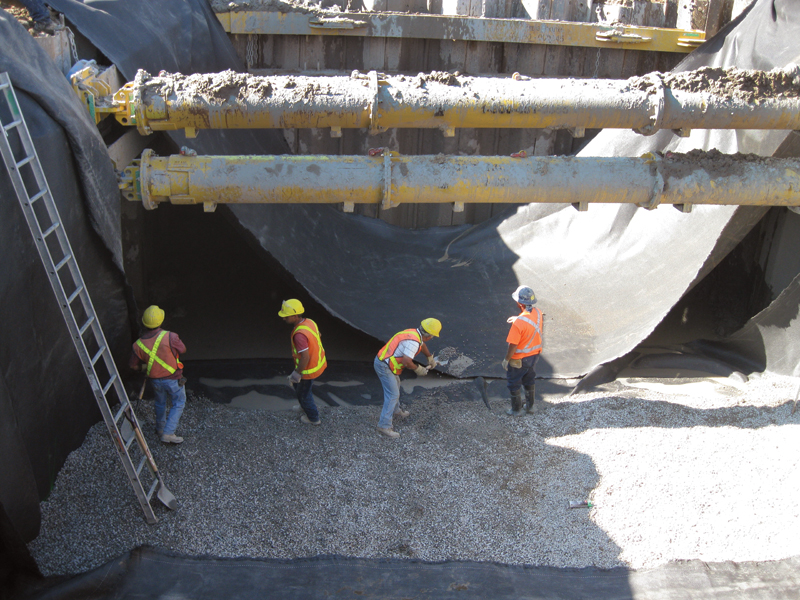 Under Places to Grow, Ontario’s growth management plan, the small south-central Town of Georgina is expected to add 45,000 people to its current population of 43,517 (2011) by 2036. This projection, as well as current development plans, necessitated a 55-per-cent expansion of the community’s water system, making Keswick South the town’s largest-ever water and wastewater infrastructure project.

The project included two critical components to the continued development of York Region: a trunk watermain and twin forcemains; and improvements to Woodbine Avenue. The design and construction of Keswick South began in 2006 and was completed in 2011. In that time, the project team encountered a number of challenges, including a tight timeline and poor soil conditions.

The original scope for the twin forcemains called for dedicated forcemains from the Joe Dales SPS to the Keswick WPCP. However, through consultation with the adjacent developer and the Region, the plan was adapted to include a pumping station and forcemains to connect the new development to the Keswick WPCP. To minimize the infrastructure in York Region’s right-of-way, the project team integrated a large interconnect chamber into the design. Under normal operations, the chamber provided a dedicated forcemain for the Joe Dales SPS and the future pumping station for the new development. It also allowed for the flexibility to divert the flows from both pumping stations to a single forcemain in the event of an emergency.

During the initial planning and design stage, the team identified poor soil conditions along two kilometres of the route. The soils were weak and presented a challenge for the support and the installation of the pipes. To provide stronger support for the watermain, the team removed the existing weak soil to 0.5 metres below the bottom of the pipe and replaced it with stronger soil. The pipe was buried in ±0.3 metres of the stronger soil and wrapped in high-strength geotextile material. The geotextile material provided a separation from the weak soils and boxed in the stronger materials and pipe. To provide trench support during the installation, the watermain was installed using a slide-rails system.

Another challenge the project team encountered was the Maskinonge River crossing. Given the poor soil conditions, the team needed a non-traditional solution and decided to secure the watermain and forcemains to the underside of the bridge. The pipes were tucked in between the bridge girders, avoiding detection unless viewed from directly under the bridge. They were also created to be vandal proof:

buy levitra from canada
stainless steel pipes, insulated and then wrapped in 18-gauge steel. This solution minimized the potential impact to the Maskinonge River and installation challenges involved with trenchless crossing, such as delays.

Those same two kilometres of poor soil conditions concerned the project team. They worried that the widened portion of road would settle differently than the existing road, which had been subjected to years of traffic loads. With this in mind, the team designed and implemented a way to simulate years of traffic loads. The team installed a berm of soil on the edge of the widened road for a period of time. The berm was removed and the widened road was made ready for the asphalt. This precautionary solution minimized differential settlement, which will impact the need for long-term maintenance and improved surface drainage.

Bike lanes were also incorporated into the design, which is a first for a regional road in Georgina and is built in accordance with the region-wide Pedestrian and Cycling Master Plan. The addition provides the community with a safe alternative to travelling and an opportunity to experience their community in a new way.

The Ministry of Transportation’s (MTO) Highway 404 extension also called for intersection improvements at Woodbine Avenue and Ravenshoe Road, which were not originally included in the scope of work for Keswick South. However, through an effective communication plan, the project team and MTO consultants were able to accommodate for the future plans, minimizing the impact of any potential rework the intersection.

For every challenge, the Keswick South project team designed a solution that was mindful of the tight timeline, was cost effective, and provided flexibility for further growth. The town of now has the critical infrastructure to allow growth to continue and the community to prosper, the first regional road in the Town of Georgina with bike lanes, and improved water and wastewater facilities to support future growth.  WC

Jessica Rowen is the marketing manager at The Municipal Infrastructure Group.