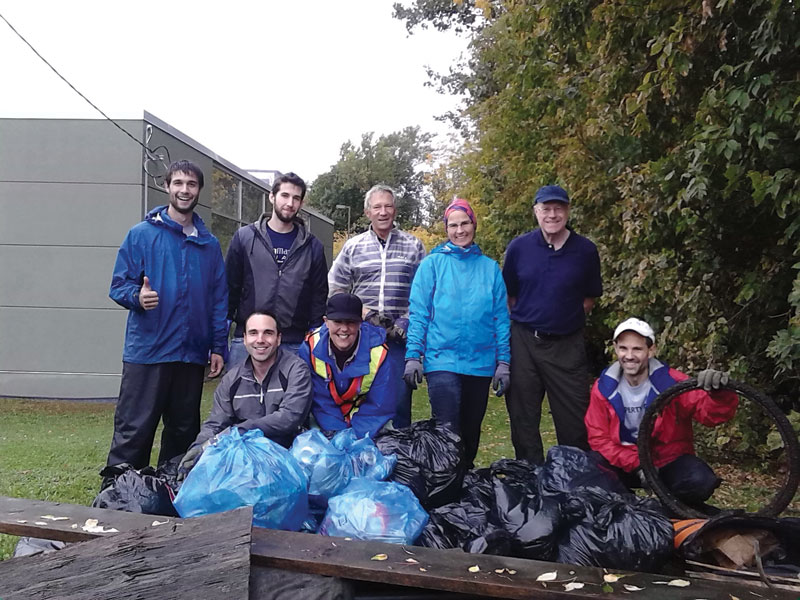 The unnamed candidate had a problem.

Though not against the idea of clean water—who would be?—he didn’t want to make it a priority in his election campaign.

But on the day before the 2014 Ottawa municipal election, he was frantically calling the Ecology Ottawa offices, trying to convince the organization to post his environmental positions on its website.

In the lead up to the election, Ecology Ottawa developed a candidate survey on the organization’s key project areas, including water. The questions weren’t exactly challenging (one was known internally as the “Would you rather have clean water or a punch in the face?” question), but they didn’t have to be. The point was not to determine whether a candidate likes clean water, but whether they would prioritize clean water.

Nobody is really against water. That’s why water is so difficult to force into the conversation. Like a calm lake, there are no ripples in that statement which would create an opportunity for discussion.

As Canadians, we all agree water is great. This agreement is also, paradoxically, the source of difficulty for anyone trying to improve water quality in a local river, or reduce the flood risk in a nearby neighbourhood. Water advocacy has to find a way to move beyond the blanket statement “clean water is important” to an advocacy model that makes water emotive. Some environmental NGOs are reimagining their water leadership role as one that enables the public to use their own connection with water to enact change.

With this in mind, Ecology Ottawa approached the election with the goal of being seen, heard, and counted. It wanted the candidates to go into office knowing there was a large group of committed Ottawans who cared about the environment—and to reach out to that group.

The way to do that is to figure out what connects people with water instead of focusing on what is technically correct, but uninspiring. Why do people care about water? For example, most of Ecology Ottawa’s water supporters live near a river or creek. It seems self-evident, but people who have actually taken the time to step back and think about what water means to them are more likely to support enhanced water protection.

The organization’s surveys forced candidates into a place where they had to be clear about their prioritization of water, both in relation to their other platform pieces and in relation to where the other candidates ranked water on the hierarchy of priorities. This exposure presented a foothold for water advocates to think about their own feelings on nearby rivers, creeks, and canals.

The Lake Ontario Waterkeeper spends a lot of time looking for what connects people with water. Founded in 2000, the group seeks to create a swimmable, fishable, drinkable future through the empowerment of those who care about Lake Ontario. Part of that empowerment is about diving deeper into the depths of how people relate to water.

The Waterkeeper Swim Guide—a website and app that provides up-to-date information on beach swimmability—is designed with this connection in mind. “Other swim guides are very technical,” said Krystyn Tully, executive director of Lake Ontario Waterkeeper. “Scientists would come to us and say, ‘you can’t just say it’s green or red, there’s more nuance.’ But if you’re taking a two-year-old to the beach, yellow is red. You’re not putting them in.”

Clean water is important, but water quality facts can’t be expected to resonate on their own. The Waterkeeper isn’t content to be right about water quality. They want to be heard—and in order to be heard, you need more voices.

Distributed leadership is a model that empowers community members. The system is collaborative rather than top-down. It allows volunteers to see themselves as leaders. It combines all the advantages of leadership—flexibility and enthusiasm, for example—from within a system to maximize their individual impact. It is a group activity that works through relationships.

Ecology Ottawa created community groups that also mobilized around the election. The groups used the survey results to inform themselves on each candidate. Survey responses started to come up at election debates across the city. The number of candidates who had submitted responses rose rapidly as they realized that they could not afford to ignore the environmental conversation.

The Waterkeeper used distributed leadership as well. “Years ago, we realized that it’s actually going to take a lot more water leaders to protect the watershed,” Tully said. “So we started to create them.”

The distributed leadership model is a new approach for water advocacy groups that is both more personal and more wide reaching. “We’re taking them to something that drives them personally,” she said. “An artist might want to contribute art. If you’re building a movement, you need to allow people to engage in different ways.”

In Ottawa, the unnamed candidate didn’t win, having been defeated by an opponent with excellent answers to all of the environmental survey questions. In total, 17 of 23 elected councillors had provided in-depth survey answers. Voter turnout in that neighbourhood rose significantly compared to past years.

Clean water is a self-evident good, but one without a clearly defined area of ingress for problem solving. Distributed leadership may help push water into the conversation.  WC