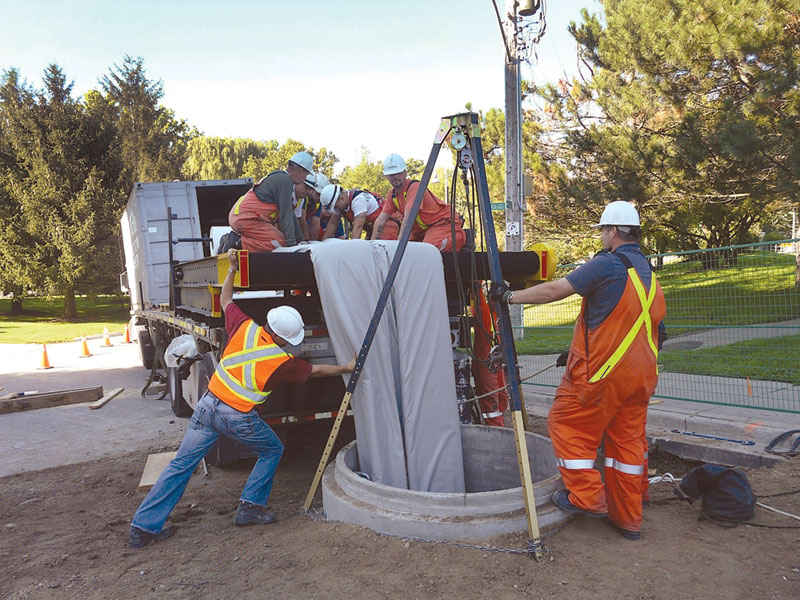 Underground infrastructure throughout North America is rapidly reaching the end of its design life. In recent years, there have been increases in public infrastructure investments, but the decay of infrastructure is occurring more quickly than it is being repaired. One current challenge is helping municipalities seek innovative technologies to replace, renew, or extend the life of their systems.

One such municipality is Halton Region. Located in southern Ontario, Halton is composed of the City of Burlington and the towns of Oakville, Milton, and Halton Hills. The region is known as a leader in the promotion of trenchless technology, and in 2014, it took another step in that direction.

A tender for the wastewater main replacement and rehabilitation on Pinegrove Road, Pinedale Avenue, and Woodale Avenue in the Town of Oakville was tendered and awarded to the low-bid contractor at an initial tender value of $2.2 million. The infrastructure in these areas was installed in the mid-1950s and, through condition assessments completed by the region, formed the basis for the tender. The condition assessments showed areas of structural defects as well as active infiltration.

It became clear to the general contractor early on that the region was looking for innovative methods to complete this project. After the tender close, the Town of Oakville requested that the Halton Region search for alternatives for replacing most of the wastewater main on Pinedale Avenue due to the street’s mature trees and concrete road. Oakville was concerned about the potential costs of replacing the road surface throughout the project areas. The social costs of road closures and noise from general construction were also of concern to both the region and the Town of Oakville. Dealing with construction obstructions, loss of trees, traffic delays, and the general disruption to entire neighborhoods was deemed unacceptable.

After discussions with the region, a complete reassessment of the project area was undertaken to determine the condition of the underground assets. Many of the services still had remaining useful life, which led the contractor to provide the region with an alternate to the original tender. This allowed for select areas to be replaced and much of the project to be completed using cured-in-place pipe (CIPP) lining.

The region reviewed the proposed changes and realized that the trenchless options would greatly reduce the social costs or construction footprint that typically would be required by traditional open-cut underground construction. With changes to the contract, a totally trenchless solution was utilized wherever it was possible. One by-product of utilizing trenchless technology is the reduction of the carbon footprint, which is a factor in all projects throughout Halton Region. Through the use of CIPP lining, it is estimated the carbon footprint was reduced by more than 50 per cent for this project.

The project occurred in areas of Oakville where many homes had elaborate landscaping and mature trees that would cause problems if conventional digging methods were implemented. No excavations were required on private property roadways and residents were not inconvenienced for long periods of time. It is particularly noteworthy that no trees were removed during this project, which was a mandate of the Town of Oakville.

With the completion of the amended contract, the region and town enjoyed significant cost savings. While the original cost as bid by the general contractor was $2.2 million, the project as completed, including the rehabilitation of 37 manholes, was $1.75 million—creating a savings of more than $450,000.

In these times of infrastructure deficits, it is important that more municipalities like Halton Region continue to rethink traditional attitudes toward underground infrastructure and realize the full cost-saving potential of available alternative technologies. WC

By reducing the amount of extraneous or infiltration flow into the wastewater system, there is the benefit of creating additional capacity for actual sewage, which delays or eliminates the need for increased infrastructure capacity to accommodate future growth. This reduction in flow also benefits downstream system capacity, pumping, and treatment; the cost savings benefits may be significant.

Since a significant component of this project involved sewer relining, there is a benefit to extending the life of existing assets. The reduction in infiltration delays structural degradation of the infrastructure, which further extends the life of the system.

Improvement to the reliability and performance of the wastewater collection system:

Mike Near is the business development and technical representative of LiquiForce Services. This article appears in Water Canada’s March/April 2015 issue.