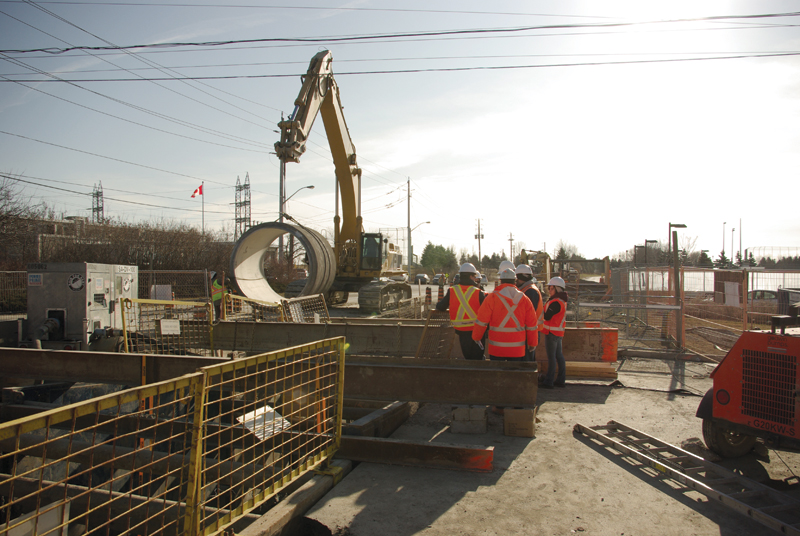 For a long time, water and wastewater systems have been developed and redeveloped on a piecemeal basis, says Shane Freitag, a partner at Borden Ladner Gervais LLP. He thinks they need a more holistic—and cost effective—approach. “Currently, there is little in the way of regional or area planning,” he says.

As new federal regulations for wastewater treatment come into effect and municipalities struggle to fund upgrades, regional planning may help alleviate financial pressure on individual municipalities. In 2009, the Canadian Council for Ministers of the Environment estimated that it will cost Canadian municipalities at least $10 to $13 billion over 30 years to fix sewage infrastructure, not including costs associated with managing combined sewer overflows and meeting the Effluent Discharge Objectives. The Canadian Water and Wastewater Association estimated that it will cost closer to $24 billion for upgrades.

Peter Mallory of CH2M HILL says these new regulations may or may not actually drive projects. “You can make the regulations, but if [municipalities] don’t have the money, they’re not going to do the projects.”

Angela Iannuzziello of AECOM says that she is seeing increase in demand for wastewater upgrades in Ontario, but funding is indeed a factor. “Municipalities are reluctant to get into debt. Some of the municipalities around here have never been in debt. Development charges [associated with these projects] are just increasing at such a rate that they’re getting a lot of pushback [from taxpayers].”

“Water rates are increasing, and that’s going to be required on an ongoing basis,” adds Iannuzziello. “The backlash is just incredible. Some of the municipalities are beginning to look at P3s, but there’s not a whole lot of experience with alternative delivery models in the [water and wastewater] sectors.” — Kerry Freek, with files from Mira Shenker

The Biosolids Energy Centre, to be located at the Hartland Landfill, will be delivered through a public-private partnership, with support from the P3 Canada Fund. Once selected, the private sector proponent will be responsible for designing, building, financing, operating, and maintaining the centre for a total concession period of 25 years.

The CRD’s current sewage management system consists of a six-millimetre screen to remove inorganic material from the waste prior to it being pumped a kilometre offshore into the Pacific Ocean. For years, this solution has been the source of debate—is dilution a sufficient method of treatment, or should the region invest in facilities that treat wastewater to a higher standard (see “Sea Change,” November/December 2010)?

New federal wastewater regulations have rendered the debate moot. Under the regulations, all municipalities above a certain size must implement secondary wastewater treatment before sewage can be discharged into the environment, and these measures must be in place by 2020 for a location like Victoria.

After substantial delays, the CRD project is moving forward. In 2012, both the provincial and federal governments re-committed to funding the project.

In addition to the biosolids digestion facility, the system configuration will include centralized, liquids-only treatment facility at McLoughlin Point in Esquimalt. The Clover and Macaulay facilities will be upgraded to pump wastewater to McLoughlin, and grit removal facilities will be added to the existing screening facilities at both locations. The Craigflower pump station will also be upgraded.

CH2M HILL’s John Spencer and Peter Mallory were involved in the early planning work several years ago along with Associated Engineering. CH2M HILL’s John Herbert is now leading the assembly of a team with Kenaidan/Obayashi, Macquarie Capital, and Kerr Wood Leidel to pursue the plant work and the biosolids energy facility.

“At the last council meeting, there was a strong push from citizens to look at resource recovery and non-traditional methods of treatment,” says Herbert. “We’ve reviewed those ideas, and other than sludge gas utilization and heat recovery from sewage, the costs are just too high. There’s just not the return for resource recovery.”

Mallory adds: “Originally, the board was interested in the possibility of building 15-20 mini-treatment sites adjacent to other facilities that could make use of the waste heat, too. The problem is economics—the capital investment is too high to do a large number of small plants. That’s not to say we’re not looking at innovation, but we have to look for the best ways to manage life-cycle costs overall.”

In late November, the CRD sewage committee rejected another motion to delay the plant. “Let’s put this in perspective. It’s a big global cost [to not treat sewage] and we have a responsibility to implement [treatment],” said Victoria’s mayor, Dean Fortin.

Though its environmental assessment was not approved until March 2010, this project has been in development since 2002. Grant Robinson of the Regional Municipality of York says the reasons for the project are two-fold. It will accommodate growth in the region under Ontario’s Places to Grow Act, and it will relieve some of the pressures on the Region’s current trunk sewer, which conveys wastewater to the Duffin Creek Water Pollution Control Plant on Lake Ontario.

One of this project’s challenges includes moving sewage between two municipalities. “The route runs through the City of Markham and the City of Pickering [in Durham Region],” Robinson confirms. As a result, a good community relations plan plays an important role.

“We’ve got 15 sites along the 15-kilometre alignment, and several of these compounds are close to residential areas,” says Robert Kerrigan of Hatch Mott MacDonald. “Additionally, we have to connect this new tunnel sewer into the existing one at two locations, both of which are in the middle of residential areas.” Odour management, he says, is a major challenge.

That’s where innovation comes into play. AECOM’s Christopher Sandink says that, upon completion, the odour management system will convey air countercurrent to the liquid flow to handle odour issues. “That hasn’t been done before,” he says. “Using large fan systems, the odour control program will ensure that air from the sewer doesn’t enter Durham Region and air is processed in York Region.”

“We’ve spent an unprecedented amount of effort on project controls and monitoring of the environment, doing our utmost to make this a less impactful project,” adds Robinson. Route selection avoids sensitive areas, such as wetlands, and technologies were selected to avoid dewatering. The team has installed a network of monitoring equipment to ensure that noise and vibration are kept to a minimum during construction.

Robinson says that so far, the project is on schedule. “All four tunnel boring machines are operable, and we’re still targeting our diversion of flows into the new sewer in 2014 and total completion date of 2015. We procured many of the components in advance of the project to ensure we’d meet our targets—York Region hasn’t done that on a tunnel project before. In a conventional contract, the contractor would do these procurements.”

Funding (for the Hanlan Feedermain, one part of the overall program): Public
• Municipal Peel Region: 64.4 per cent
• Municipal York Region: 35.6 per cent

Like the Southeast Collector Trunk Sewer, the Hanlan Feedermain (part of the larger Hanlan Water Project) is needed to service a growing population. It will supply water to the Region of Peel and neighbouring municipalities, such as York Region, and provide redundancy to the existing feedermain.

The 2.4-metre diameter feedermain will run approximately 14.5 kilometres, from the Lakeview Water Treatment Plant on Lake Ontario to the Hanlan Reservoir and Pumping Station at Tomken Road and Britannia Road East. As part of the same project, the 1.5-metre diameter Mississauga City Centre Subtransmission Main will run approximately six kilometres, from the Hanlan Reservoir and Pumping Station to the intersection of Cawthra Road and Burnhamthorpe Road.

Traffic disruption caused by conveyance construction can be frustrating for many because the people who are impacted are not necessarily the people who will reap the benefits of the work, says CH2M HILL’s Rachelle Bradshaw.

Laurie Boyce, VP, CH2M HILL, says the Region’s field ambassador program helps soften the blow. “Having a person in the field dedicated to communicating with landowners is a proactive step. We’ve had nothing but positive feedback on the Hanlan with this program.”

Choosing to tunnel also helped control impact to the public, says Bill Turner, project manager, water division, Region of Peel. “The project crosses several sections of road that can’t handle being closed for long periods of time. Rather than do open-cut, we decided to tunnel those areas.”

Turner says that although going underground can be more expensive you have to take into consideration the financial costs associated with the social and economic impacts of open-cut construction and how tunneling will mitigate these costs.

The tunnelling contract is planned to go to tender in the first quarter of 2013. The open-cut section will be contracted in March, and the north section of the build will go out in June. All parts of the feedermain should be in service by late 2015 or early 2016.

Funding: Public
Details not yet available

The existing Lions Gate plant—one of two remaining primary treatment plants in the region—opened in 1961 to serve the North Shore municipalities of West Vancouver, the City of North Vancouver and the District of North Vancouver, according to Metro Vancouver’s project website.

The site confirms that the new national wastewater regulations are one of the main drivers for building a new secondary treatment plant. In addition to a new Lions Gate plant, which is scheduled to be designed and constructed between January 2014 and December 2019, Metro Vancouver plans to build another secondary plant at Iona Island. Details on that project are forthcoming.

The region plans to decommission the Lions Gate primary plant in 2020.  WC

In 2013, Water Canada will present an expanded list of Canada’s costliest water and wastewater projects. What might make the list? We think the recently announced Randle Reef sediment remediation project in Hamilton, Ontario’s harbour is a prime candidate. Hamilton Harbour is a 2,150 hectare bay located at the western tip of Lake Ontario and is connected to the lake by a ship canal. In 1985, it was identified as an Area of Concern under the Canada–United States Great Lakes Water Quality Agreement due to significant impairment of water quality. While many improvements have been made to reduce pollution in the harbour, the problem of contaminated sediments remains.

In December, Environment Canada and the Hamilton Port Authority launched a structural test project that will involve pile driving on Randle Reef in order to confirm engineering design details. The resulting information will be incorporated into future engineering specifications for the construction stage of the proposed sediment remediation project.

The proposed remediation project involves constructing an engineered containment facility on top of a portion of the most contaminated sediment, then dredging and placing most of the remaining contaminated sediment in the facility. The facility will be constructed of double steel sheet pile walls with the outer walls being driven to depths of up to 24 metres into the underlying sediment. In total, the facility will securely contain 630,000 cubic metres of sediment contaminated with coal tar (polycyclic aromatic hydrocarbons) and heavy metals.

The test project involves hammering sheet piles into the lakebed to the depths specified in the engineered containment facility design. Sheet piles are interlocking steel sheets that join together to form a continuous barrier. In this test, pairs of piles will be tested at separate locations around the perimeter of the proposed facility. The results of this pilot test will provide an indication of the force required to drive piles at this site, providing more accurate information regarding the construction of the containment facility.