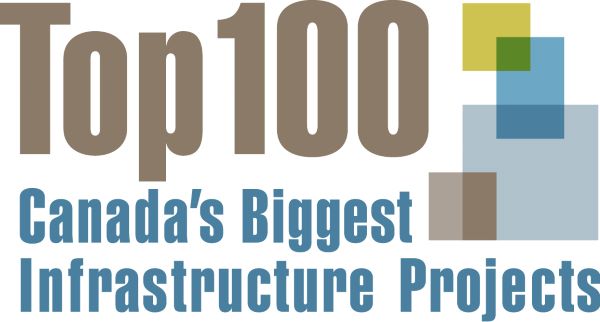 Each year, our sister publication ReNew Canada provides its report on the largest public sector infrastructure projects in Canada. This year’s report reached new heights: $273 billion in assets in the transit, transportation, energy, healthcare, and water industries, along with other public sector projects making the list, and nine of the 13 provinces and territories represented.

The water sector continues to have a strong presence on the list, with nine of Canada’s Top100 Projects coming specifically from the water sector, including wastewater treatment plants, reservoirs, and flood mitigation assets in four Canadian provinces (B.C., Alberta, Manitoba, and Ontario).

For each project on this list, we have provided information on cost, funding, companies involved in all aspects of the project delivery, basic project specifications, and an update on the progress that has been made in either procurement or construction. For more information about any of these projects, visit top100projects.ca or visit our website at watercanada.net for the latest news.

The annual Top100 Projects report is available for free online at top100projets.ca

The existing Iona Island Wastewater Treatment Plant provides primary treatment for communities in Vancouver, the UBC Endowment Lands, and parts of Burnaby and Richmond. As the facility reaches the end of its service life, Metro Vancouver has a once-in-a-lifetime opportunity to positively contribute to the health and wellbeing of its community, as well as the ecological health and biodiversity of the Fraser River Estuary and the Salish Sea. The new plant will provide tertiary-level treatment, meet the latest seismic standards, account for future sea level rise, and incorporate cutting-edge technologies for resource and energy recovery, greenhouse gas reductions, odour reduction, and energy efficiency. Metro Vancouver is working to ensure that the new facility contributes positively to the community and is working closely with stakeholders and 14 local First Nations, particularly the Musqueam Indian Band. The project also includes a suite of 20 ecological projects to enhance freshwater wetland habitat for birds and wildlife. Image: Conceptual rendering (2021) is subject to refinement.

The Don River and Central Waterfront Wet Weather Flow System & Connected Projects is a 25-year program aimed at improving water quality in Toronto’s Lower Don River, Taylor-Massey Creek, and Inner Harbour. Toronto is embarking on the largest and most significant stormwater management program in the city’s history, and with an overall budget of more than $3 billion, this 25-year program will greatly improve the water quality in these areas by keeping combined sewer overflows out of the waterways through the upgrading of technology and capacity to capture, transport, and treat it. The project is comprised of an integrated system of tunnels, storage shafts, a high-rate treatment facility, and wastewater treatment plant upgrades. The Program is made up of several individual projects that will work together, including the Don River and Central Waterfront Wet Weather Flow System, the Ashbridges Bay Treatment Plant (ABTP) Integrated Pumping Station, ABTP UV Disinfection facility, ABTP Landform and High-rate treatment facility, and ABTP Outfall. Construction of the Coxwell Bypass Tunnel is scheduled for completion in 2023. The Ashbridges Bay Landform Project, a joint initiative between the City and the Toronto Region Conservation Authority (TRCA), as well as projects at the ABTP are all well underway. These include the Integrated Pumping Station, the Landform Project, the ABTP UV Disinfection facility, and the ABTP Outfall. (repeats?)

When this stage 5 project by Metro Vancouver is complete, the Annacis Island facility will have increased its capacity to serve 1.5 million people in 14 Metro Vancouver municipalities, from its current ability to serve 1.25 million people. The previous expansion was done in the late 1990s. The plant serves much of the Tri-Cities, Burnaby, Maple Ridge, Delta, Surrey, Pitt Meadows, Langley, and White Rock. Four proponents have been shortlisted for the outfall project, the next phase of the Annacis expansion.

“The Annacis Wastewater Treatment Plant is one of the region’s largest wastewater treatment facilities, serving 14 Metro Vancouver municipalities. Over the next several years the plant will receive major upgrades in order to meet the needs of our region’s growing population. These upgrades will significantly increase the volume of wastewater the plant can treat and will enhance the facility’s resilience to both earthquakes and the impacts of climate change.”—Director Richard Stewart, chair, Metro Vancouver’s Liquid Waste Committee

Financing Detail: The federal, provincial, and municipal governments are each contributing an equal share of $416.6 million to this project.

The Port Lands Flood Protection and Enabling Infrastructure project is the redevelopment of one of the largest portions of underdeveloped land in a major urban core in North America. Located along the shore of Lake Ontario, southeast of Toronto’s downtown core, the project will include substantial soil remediation, a new mouth for the Don River, and critical infrastructure for flood resilience to unlock the 325-hectare site for residential and commercial development. In winter 2021, the third of four bridges arrived in Toronto from Halifax. These bridges will connect Toronto to Villiers Island once flood protection is complete. This year, planting is starting in the new river valley. For detailed updates, follow @TheRockRipper on Twitter.

Legal: Blake, Cassels & Graydon (advisor for the City of Calgary)

Bonnybrook Wastewater Treatment Plant is the largest of three wastewater treatment plants serving Calgary and the surrounding area. Originally built in the 1930’s, Bonnybrook is undergoing its most substantial upgrade to date. With an investment of more than $1 billion dollars over the span of 10 years, it is expected that Bonnybrook will see its total treatment capacity increase to nearly 1.4 million citizens when completed in 2026. In 2021, the project made significant progress, and the greatest number of projects were completed and commissioned, including the installation of two new primary clarifiers and six additional secondary clarifiers. The project also entailed the construction of three secondary treatment bioreactors and retrofits, and upgrades to existing solids handling digesters and the UV disinfection facility. Lastly, as part of this Plant D upgrade, a new bio-gas handling storage facility was completed and commissioned. In Spring of 2021, a new outfall was commissioned and put into service. This new larger outfall was built 900 m further downstream to provide additional flood resiliency and an improved diffusion system to enhance environmental performance.

The $540 million flood protection project consists of a 24.1 km long channel from Lake Manitoba and a 23.8 km long channel from Lake St. Martin. The Lake Manitoba outlet channel includes an inlet at Lake Manitoba and outlet at Lake St. Martin, a new water control structure with a bridge and three new bridge crossings over the outlet channel. The Lake St. Martin outlet channel includes an inlet at Lake St. Martin and outlet at Lake Winnipeg, a new water control structure with a bridge, as well as the necessary Manitoba Hydro infrastructure to power the control structure. Construction is expected to commence in early 2022. In 2021, Manitoba Infrastructure continued to advance the Outlet Channels Project through the provincial and federal environmental assessment processes. Meetings are ongoing with federal regulatory agencies, Indigenous groups, and stakeholders, such as the Rural Municipality of Grahamdale. As the Outlet Channels Project continues to move through the environmental and consultation processes, engineering design work is happening concurrently. Preliminary engineering design is complete for all channel components and detailed design work is well underway. Construction tender packages are under development but cannot be released until a provincial licence and federal environmental approvals are received.

The Springbank Off-stream Reservoir represents the Government of Alberta’s solution to mitigate severe flooding along the Elbow River, similar to what took place in June of 2013. Current plans call for a dry reservoir with a capacity of 70.2 million m3 and an outlet structure to safely release the water back to the river. The reservoir will be located approximately 15 km west of the City of Calgary. In October 2021, voluntary agreements were reached with landowners to secure the 3,700 acres of land needed for the project. The tendering process for construction has begun, with tenders sent to pre-qualified bidders. Construction is slated to begin in early 2022. Alberta Environment and Parks will be responsible for the operation of the project once construction is complete.

John Tenpenny is the editor of ReNew magazine.