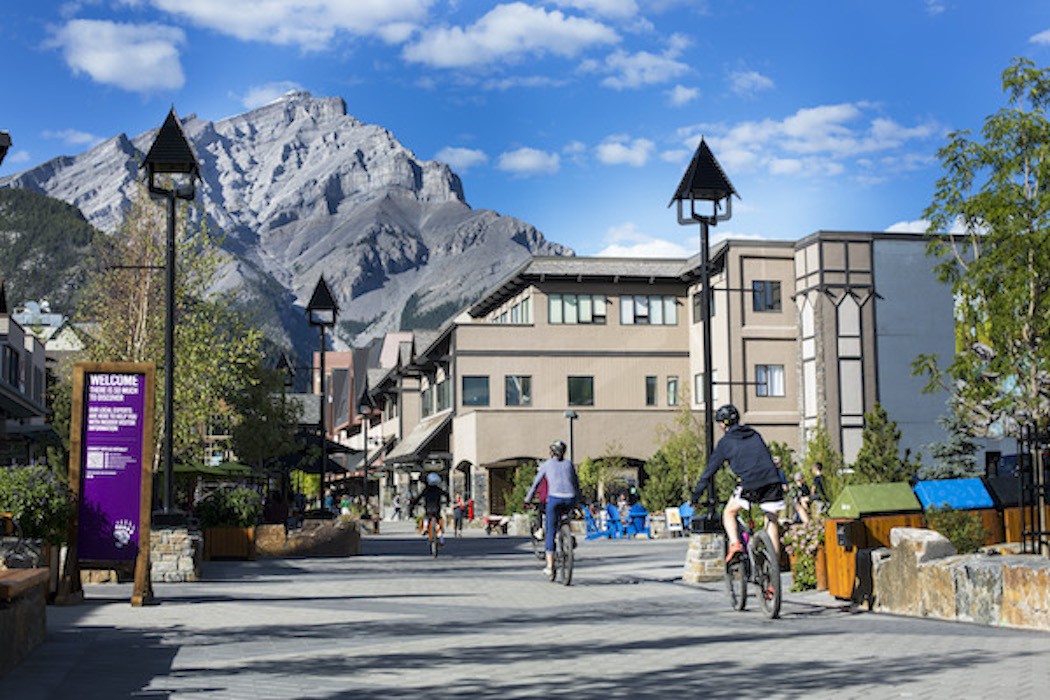 When you think about redeveloping a road to make it more pedestrian-friendly, what actions come to mind? The first thoughts likely lead to the idea of building wider sidewalks, installing bike lanes, and creating spaces for outdoor patios.

But what about water? How does water factor into the plans? How do you ensure that water does not become an impediment to pedestrian traffic, discouraging people from attending restaurants and shops during and following inclement weather?

That was one of the key challenges faced by the Town of Banff as it looked to redefine the pedestrian experience in its downtown core.

Discussions involving redeveloping Bear Street, located one block west of Banff Avenue in the downtown core, has been a long time coming, with the Town creating the Downtown Enhancement Concept (DEC) in 1992. Central to the DEC plan was improving the pedestrian experience: “A opportunity exists to make the automobile a guest in the downtown district, to get people out of their cars and allow them to participate in the pedestrian ambience of downtown Banff.” (DEC Page 7).

In 2013, the Town adopted the Integrated Transportation Master Plan (TMP), created through extensive community engagement. Bear Street is not considered a main arterial road in the downtown core and receives a fraction of the vehicle and pedestrian traffic of nearby Banff Avenue or Lynx Street. It was called out specifically in the TMP as an opportunity for a “traffic-calmed/woonerf/shared street design.” This formed the basis for the five summers of trials of a temporary woonerf on Bear Street between 2015 and 2019.

The success of the woonerf led the Town to move forward with a design that would continue to improve the volume of pedestrian traffic and enhance the downtown experience for all visitors.

Adopting a design that caters to people movement meant addressing one of the biggest issues faced on the roadway: stormwater.

There were additional important stormwater considerations that had to be accounted for. With the removal of curb and gutter, any ponding on the street would threaten flooding to adjacent buildings. In addition, due to the pedestrian nature of the street, it was important to avoid ponding to minimize impact to the users in both summer (ponding) and winter (freeze/thaw ice build-up). The Bear Street stormwater designer approached the design considering that poor drainage creates the largest barriers to the most vulnerable users and, therefore, set a high standard for the stormwater design.

As the street was a retrofit with limited real estate available, there were limited options available for effective stormwater management. More traditional stormwater treatment options, such as downstream oil grit separators, were considered and compared against greener solutions.

The Town of Banff proceeded with the use of soil cells in the project due to the dual use of stormwater treatment and supporting tree growth in the downtown area, as the system also provides a passive water source and sufficient uncompacted soil volumes. The soil cells are part of a customized stormwater network and effectively act as an underground bioswale, filtering and treating stormwater and eliminating 80-95 per cent of total suspended solids. Sensors within the soil cells activate irrigation of the trees when needed, ensuring healthy plant growth and overall long-term effectiveness of the system.

As there is no curb and gutter, the entire street is designed with an offset centre swale draining to a trench drain (with custom surface grate designed to complement the paver pattern). The trench drain is interrupted in the heart of the street to preserve the aesthetic and to not introduce lines that could provide unintentional road demarcation for vehicles moving through the street. This area was also designed as a high point to protect the main gathering and event space from ponding during major rainfall events or snowmelt.

The trench drain slopes internally toward in-line catch basins that direct water into the top of the soil cells via perforated pipe where the topsoil was left low to provide additional stormwater storage capacity for major events. As water infiltrates through the topsoil, street trees are passively irrigated while contaminants and 80-95 per cent total suspended solids are captured within the soil matrix and the tree’s root system. Topsoil was carefully selected to provide a moderately high percolation rate, ensuring that trees have enough time to utilize water and enough capacity to manage stormwater flows generated by the street. At the base of the soil cells, a subdrain collects excess water that has filtered through the soil and is directed to the main stormwater network which eventually discharges into the Bow River. This system offsets some of the requirements for water from the Town’s potable network for irrigation, and in turn the energy requirements to treat and deliver that water to the Bear Street irrigation.

Additional redundancies were introduced into the system to ensure effective stormwater management and accessibility of the street:

This multi-faceted approach to stormwater management and drainage provides the best available solution for ensuring minimal rainfall impacts are encountered by the pedestrians using the street.

The early results of the Bear Street redevelopment have been very positive. According to information provided by the Town of Banff, there has been a 33% increase in visitation to Bear Street (opened in 2021), which is expected to increase as the economy continues to open up after the COVID-19 pandemic. There have been no drainage issues observed and the street performed well over summer 2021 and into the winter of 2022.

Bear Street has been a prime location for visitors and locals alike walking and wheeling to visit, as well as a key location for street animation including buskers, pop-up markets, the Alberta Beer Festival and Snow Days Winter Festival. Thanks to the redevelopment project, there are even more reasons to take a walk through this iconic community.

Jessica Wheatley is a Civil Engineer, Manager of Infrastructure, Canmore, for WSP in Canada, and was the project lead for the Bear Street Project