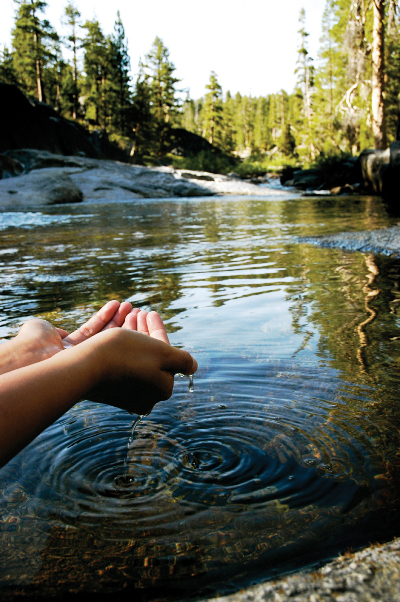 Jurisdictions around the world are increasingly recognizing that sound water management is the foundation for economic and community prosperity. From growing and preparing our food to recreation to producing the many commercial goods we rely on every day, virtually every aspect of our lives is interconnected with water.

Unfortunately, the belief that freshwater supplies are limitless remains pervasive, and as a result Ontarians waste large amounts of water. The per capita residential use of water in Ontario is 260 litres per day, close to twice the amount used in many European countries. With the population of the Greater Golden Horseshoe region in southern Ontario projected to grow by four million people by 2031—equivalent to creating a mid-sized city roughly the size of Kitchener every year for the next 23 years —wasteful practices will mean significant increases in the demand for water in the coming decades, placing increasing pressure on freshwater ecosystems.

Rising demand is a concern given that freshwater resources in the province are increasingly showing signs of stress. For example, in 2007 Lake Superior reached its lowest level on record (since 1926) and seven watersheds were classified as Level II low water condition according to the Ontario Low Water Response program, indicative of a potentially serious problem stemming from low rainfall and low streamflow. Climate change is in many ways a wildcard, anticipated to increase rates of evaporation and alter rainfall patterns, with the potential to significantly impact the reliability of water supplies.

Simply put, rising demand for water is on a collision course with declining water availability. Conservation and efficiency holds much promise for addressing Ontario’s water management challenges. Instead of being marginalized as an environmental add-on to business-as-usual water management, conservation can and should be embraced as integral to good water management practice to ensure that water continues to sustain the ecosystems and livelihoods on which millions of Ontarians depend.

The Province of Ontario has recently taken steps to develop a much-anticipated provincial water conservation and efficiency strategy. The mandate for the strategy arises from a commitment made in 2005 by the Premier of Ontario under the Great Lakes-St. Lawrence River Basin Sustainable Water Resources Agreement. This good-faith agreement signed with Quebec and the eight Great Lakes states requires each state and province in the basin to establish water conservation goals, objectives, and programs. In 2007, the province passed the Safeguarding and Sustaining Ontario’s Water Act to enable key commitments of the Agreement to be met.

In August, the government of Ontario published Stewardship, Leadership, Accountability: Safeguarding and Sustaining Ontario’s Water Resources for Future Generations, and asked for input on the strategy from the public. The government has signaled an understanding of the importance of developing a strong water conservation strategy, purporting the province to be “well-positioned to develop the technology and skills needed to solve our water management challenges while increasing our global competitiveness.”

A recently released report entitled H2Ontario: A Blueprint for a Comprehensive Water Conservation Strategy was endorsed by organizations ranging from municipal stakeholders such as the Canadian Water and Wastewater Association to environmental advocates such as Great Lakes United and Environmental Defence to provide a unified vision for the provincial strategy. The report outlined 10 priorities and 25 actions essential to unleashing the full potential to make Ontario a regional leader in water conservation.

A number of cost-neutral actions are widely supported by stakeholders and have the potential to conserve large volumes of water used province-wide:

A market for innovative, cost-effective, and water-saving products and services is both achievable and necessary in the coming years. Investing in conservation and efficiency could provide thousands of jobs in service sectors such as plumbing, landscaping, engineering, construction, and design that cannot readily be outsourced outside the province. However, until this market is well established, it is essential that government lead Ontario through the transition to a water-wise economy, including providing funding support for key initiatives. For example, two of the identified priorities for funded initiatives include:

The prospect of a progressive provincial water conservation strategy for Ontario offers an abundance of opportunity for saving energy, GHG emissions, dollars and, of course, water. In order to realize its full potential, the strategy requires the support and cooperation of a variety of provincial ministries along with approval from Ontarians in general. With support, Ontario stands to strengthen its long-term economic outlook, create green jobs, and become a regional leader in energy and water conservation and efficiency.

Carol Maas is the innovation and technology director at the POLIS Water Sustainability Project.
Kurtis Elton holds a Master of Environmental Studies from the University of Waterloo.