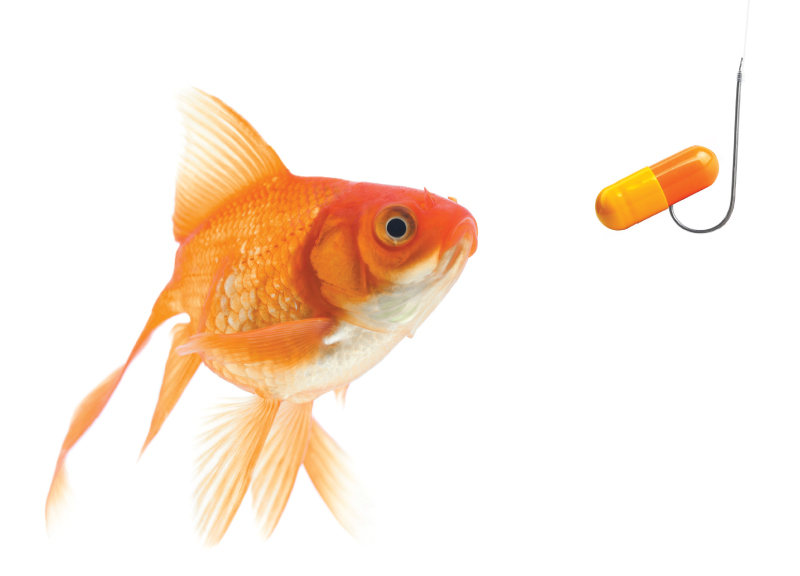 If the brook trout swimming in Dr. Sébastien Sauvé’s laboratory tanks at the City of Montreal wastewater treatment plant smiled while his team probed their brains for effects from trace pharmaceutical residues, it’s possible that antidepressants were responsible. Not that Sauvé, associate professor of environmental chemistry at the Université de Montréal, conducted any kind of behavioural analysis. That’s a whole other kettle of fish. Rather, his research into biomarker response falls within the realm of ongoing scientific work that will help understand the harmful effects on human and animal health that can occur when trace volumes of pharmaceuticals end up in our water supply, and find ways to prevent that from happening.

Every time we flush the toilet and dispatch human waste into municipal sewers, we unintentionally send along the chemicals contained in the products we consume or apply to our bodies. Scientists are concerned, of course, about ingredients in household items such as shampoos, deodorants, and perfumes. However, increasingly their attention is drawn to the medicine cabinet. Our lakes, rivers, and other water bodies have been found to contain trace amounts of pharmaceuticals, from antibiotics and painkillers to hormonal compounds and chemotherapy medications.

How much is too much?
Not all drugs are equal in their impact on water or on living beings dependent on water. As Sauvé sees it, anti-inflammatories and analgesics are found in trace amounts small enough that toxicity is of relatively minimal concern. “If you compare the dose that you get from drinking two litres per day for 70 years, in a lot of cases you will end up with something less than one per cent of the normal daily dose,” he says. Antibiotics and hormonal drugs, on the other hand, are a major worry. Trace amounts might not be toxic, per se, but concentrations might be high enough to contribute to antibiotic resistance or endocrine disruption. Sauvé says impacts can vary depending on a person’s age or whether they have a hormonal-dependent cancer or other pre-existing condition. While conclusive data is lacking for some medications, including chemotherapy agents, Sauvé says scientists have not found traces of chemotherapy medications in drinking water, which is welcome news, given that cancer treatments are often themselves carcinogenic.

Sauvé’s own team recently examined the brain tissues of brook trout exposed to a mixture of St. Lawrence River water and treated effluent from the City of Montreal, looking for biomarker signs known to occur as a result of antidepressant and antipsychotic medications. “We measured a slowed response in the brain tissue when exposed to the effluent,” he says, adding that the fish did not exhibit any visible signs of distress—or pleasure, for that matter. “Nothing obvious in terms of the behaviour of the fish was noted. We’d basically need a behavioural evaluation of the changes in the trout, and while that sort of study could be done it’s fairly complicated and not the sort work that I do.”

Addressing the problem
This rising awareness of pharmaceuticals contaminating our water sources is worrisome, but with scientists around the world conducting experiments and analyzing data, fish—and people—have something to smile about. At Carleton University, Dr. Banu Örmeci, an associate professor of civil and environmental engineering, and Dr. Edward Lai, a professor of chemistry, are designing molecularly imprinted and non-imprinted polymer particles to adsorb (adsorption is the adhesion of atoms, ions, gases, liquids, or dissolved solids to a surface) and then remove compounds such as hormone-disrupting medications from water. “Our target application area is drinking and wastewater treatment, including domestic, industrial and even hospital systems,” Örmeci says, describing a removal rate of 95 to 97 per cent.

At the University of Waterloo, researchers are looking to develop titanium dioxide nanowire membranes to capture pollution from personal care products and pharmaceuticals during water treatment. Dr. Anming Hu, a research assistant professor with the university’s department of mechanical and mechatronics engineering, says titanium dioxide nanowires generate charges under ultraviolet or visual light; these charges can convert into hydroxyl radicals which, in turn, can decompose pharmaceutical or other organic molecules. “This mechanism is called photocatalytic degradation or, in the conventional civil engineering term, advanced oxidization processing,” Hu says. He adds that a key attraction is the technology’s relatively inexpensive price tag. “We are targeting prototype water filters and treatment reactors, which could be used in wastewater treatment plants or residential drinking water treatment systems.”

Several private companies are also researching potential solutions. In Denmark more than a year ago, pump manufacturer Grundfos tested BioBooster, which the company says can remove antibiotics and chemical-based drug compounds, for potential hospital use. Effluent from a big hospital was trucked to one of the company’s pilot plants, treated conventionally, and then re-treated in a laboratory with a combination of ozone and activated carbon. “This demonstrated very high removal rates for antibiotic-resistant bacteria, cancer medicine, contrast fluids and other hazardous medical substances,” says product manager Jakob Søholm. The company is now working on a full-scale plant in order to verify efficiency and make it cost-effective.

BioBooster is not yet ready for marketing, but Søholm says the treatment of wastewater in hospitals has some advantages over releasing it for handling at the municipal level (see “Hospital Hotbeds”). Some contrast liquids and (other) medicines are used only in hospitals, and hospitals also release a significant portion of other medicines, including antibiotics. “Overall, we will catch a large portion of the problem,” he says, adding that decentralized treatment at the hospital level makes sense because the wastewater that is then released is much cleaner and ultimately less costly for the municipality to process.

In Orangeville, Ontario, Xogen Technologies is pilot-testing an electrolytic treatment process at the town’s wastewater plant. “We expose wastewater to hydrogen peroxide, hydroxyl radicals and ozone,” president Angella Hughes says, explaining that these gases contain oxygen and can break down and remove organic materials and destroy pathogens. While Xogen’s own tests indicate resulting contaminant levels after treatment either meet regulatory requirements or fall below detection levels, the company is awaiting third-party verification by the Ontario Centre for Environmental Technology Advancement and the U.S.-based National Sanitation Federation, expected next year. In the meantime, Xogen is working on business development. “We have a number of interested groups in the food manufacturing sector in Ontario,” Hughes says, adding that the appeal there is the technology’s capacity to deal with high organic content. “We’re also talking to municipalities in other countries, going on a trade mission with the Ontario government to Brazil, and talking to groups in Russia.”

With research and marketing efforts ramping up, there’s no clear consensus on where treatment technologies would best be applied to combat pharmaceuticals. Medical facilities should theoretically be hotspots for pharmaceutical discharge, given that they’re loaded with patients, yet Hughes says medications such as painkillers and antidepressants are consumed in significant amounts at home, and people often undergo hospital treatment as day patients. “I would hate to focus just on hospitals because I think it’s a much bigger problem,” Hughes says. “You might have a more concentrated waste stream coming from a hospital, but you’ve also got the general population taking prescription drugs and over-the-counter medications at home, and these are going directly into our municipal sewers” (see “To Flush or Not to Flush?”).

Peter Cartwright, technical consultant to the Canadian Water Quality Association, says the most efficient way to address drinking water might be to install treatment systems at the faucet. “The concentration of drugs as one category of contaminants is higher in a hospital, but think about everything else we’re putting into the water supply every time we wash our hands or face or take a shower,” Cartwright explains. “In the United States alone right now there are 300,000 under-sink at-home units installed every year in residences. The writing is on the wall that everybody eventually will be drinking from a faucet that is attached to some sort of water purification system.”  WC

Saul Chernos is a freelance writer based in Toronto.

At the hospital Reinier De Graaf Gasthuis in the Dutch town of Delft, micropollutants don’t stand a chance. Since the summer of 2010, a company called Pharmafilter has been piloting a decentralized wastewater treatment plant to capture the potentially hazardous material contained in the hospital’s effluent and close the loop on the hospital’s water use.

By introducing single-use disposables from biodegradable plastics instead of reusable equipment, such as cutlery, tableware, bedpans, and urinals—Pharmafilter’s website even features a bioplastic syringe—the company is helping to reduce contact with contaminated waste. The waste is deposited into a shredder connected to the existing sewer system. Together with the effluent from toilets, sinks, and showers, the shredded waste is transported to a purification plant on the hospital’s site.

In the plant, solid waste is separated from wastewater and reduced by anaerobic digestion, producing biogas which is reused to power the plant. The wastewater is purified through a series of treatment methods, from ozonation to granular activated carbon to reverse osmosis, significantly reducing the presence of medicines, germs, cysostatics, contrast liquids, and endocrine substances.

With an estimated cost of €20 million and a 20-year life expectancy, the system would provide the hospital with savings in waste logistics and handling. It would also mean that the hospital would pay only volume—not discharge—fees to the municipality. Pharmafilter is also trying to lower energy requirements as much as possible.

The company has plans to introduce the Pharmafilter concept commercially in 2012 and has already seen interest from Germany, Belgium, the United Kingdom, and Canada.

To Flush or Not to Flush?

Though it can keep drugs out of the wrong hands, it’s a myth that flushing unused or expired prescriptions down the toilet is the best method for safe disposal. “People often end up using a toilet as a trash can,” says Tarra Kongsrude, a senior communications advisor at EPCOR’s Edmonton office. That’s why EPCOR and other utilities have launched “what not to flush” campaigns in recent years. Not only are products such as dental floss gumming up the works, but drugs entering waterways is a growing concern, and utilities want to educate residential clients about drug repository programs offered by pharmacies. According to the Post-Consumer Pharmaceutical Stewardship Association, the following provinces have formal disposal programs: British Columbia, Alberta, Saskatchewan, Manitoba, Ontario, Nova Scotia, Prince Edward Island, and Newfoundland and Labrador. Community pharmacies in Yukon and Nunavut have informal programs, while some Quebec municipalities have collection days and mobile depots, and the majority of New Brunswick’s regional solid waste commissions offer household hazardous waste programs.