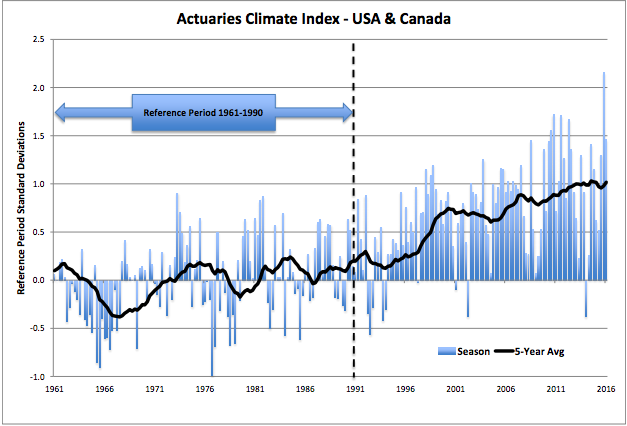 Organizations representing the actuarial profession in Canada and the United States launched the Actuaries Climate Index (ACI), which has found that incidents of extreme weather have increased threefold from the reference period.

The risk measured by the ACI is relative to the average frequencies during the reference period of 1961–1990. The index value remained below 0.25 during the reference period, reached a value of 0.5 in 1998, and first reached 1.0 in 2013. These values indicate a sustained increase in the frequency of extreme weather occurrences and changes in sea levels. The current five-year average is 1.02.

David Dickson, president of the Canadian Institute of Actuaries said, “The [actuarial] profession wanted to demonstrate that actuaries and climate scientists could combine their education and training to come up with a tool that could be of use to governments, environmental groups, and scientists. I am convinced that we succeeded, and we will be working with our partners to add even more value to the index.”

“The Actuaries Climate Index is designed to provide objective data about changes in the frequency of extreme climate events over recent decades in Canada and the continental United States,” said Doug Collins, Chair of the Climate Change Committee. “Actuaries are experienced in the assessment and mitigation of the financial consequences of risk, and we have developed the index for analyzing the climate.”

Updates for values will be posted quarterly on ActuariesClimateIndex.org as data for each meteorological season becomes available. The organizations are also developing a second index, the Actuaries Climate Risk Index (ACRI), which will measure correlations between changes in the frequency of extreme events as measured by the index and economic losses, mortality, and injuries.