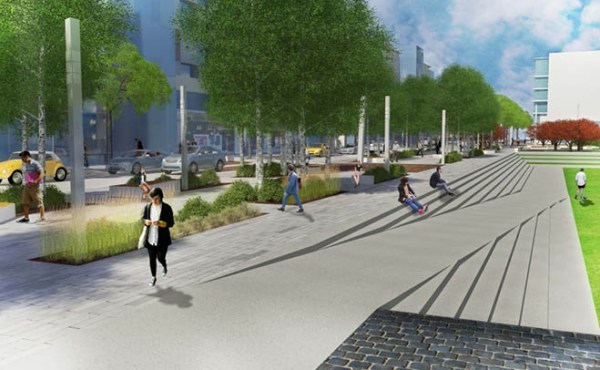 Edmonton has opened its first green street, The Amarature, to traffic, which includes a stormwater diversion mechanism.

The city describes The Armature as a pedestrian-oriented street and the core’s first green street. Special soil systems are being used to capture rainfall. The rain is used to help water trees and other vegetation along the street.

Edmonton’s The Quarters Downtown, where the green street is located, is an approximately 40 hectare area adjacent to downtown that was the focus of a public revitalization project that commenced in 2006. In the city’s urban design plan for The Quarters, the document described a number of sustainable urban design practices. One of the areas of focus outlines a goal of cleaning and controlling stormwater to “reduce runoff and protect the ecological balance of the river valley.”

Specific strategies for stormwater recovery in the document include: maximizing vegetated areas, instituting permeable surface, rain gardens, green roofs, and cisterns for storing rainwater. Further water goals in the document are to reduce the consumption of potable water in The Quarters by “installing efficient fixtures and systems to recycle greywater and rainwater for reuse in irrigation and toilets.”

The city described the opening of the Quarters Downtown’s green street as a major milestone. “The Armature is a cornerstone of The Quarters Downtown revitalization and its completion signals great progress for this community,” said Mary Ann Debrinski, director Urban Renewal.

The Armature is expected to become the heart of the Quarters Downtown. Custom furniture, bike racks, and lamp posts have been specifically created for the Armature to make it pedestrian-friendly. Work on the Armature also included updating the utilities and drainage along the street.

The street is one of the key pillars attracting development to the area, including the newly-opened Hyatt Place Hotel.

Read the Urban Design Plan for The Quarters or visit Edmonton’s website for further details on the revitalization project.