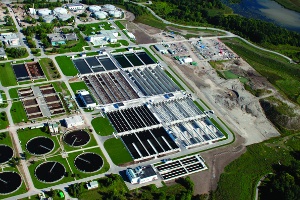 The plant receives and treats 90 per cent of the wastewater generated by York Region, as well as serving Pickering and Ajax in Durham Region. The plant’s capacity was increased to meet municipal official plans and now provides an enhanced level of treatment to remove higher levels of phosphorus. The expansion also included building a new, state-of-the-art solids handling facility, which eliminates the need to truck biosolids to landfill.

“The Duffin Creek WPCP is one of our most technically complex operations,” said Roger Anderson, Durham Regional chair and CEO, in a release. “Because the goal of a WPCP is to protect the environment, incorporated into the design of the expansion were a number of advanced energy-recovery technologies, energy-efficient equipment, and air pollution control systems.”

The governments of Canada and Ontario have both contributed $46.67 million through the Building Canada Fund – Major Infrastructure Component for this project, while the regions of Durham and York also jointly provided $46.67 million, for a total eligible project cost of $140 million.