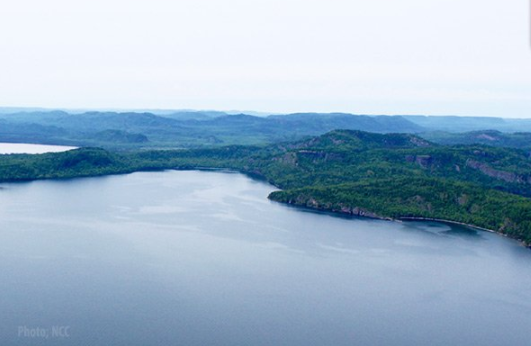 Thanks to the cross-border collaboration of several organizations, the Nature Conservancy of Canada (NCC) has purchased one of the last privately owned, undeveloped shorelines between Duluth, Minnesota, and Thunder Bay, Ontario.

Known as Big Trout Bay, the property is located just minutes from the international border, and 45 minutes from Thunder Bay, on the shores of Lake Superior. Its densely forested land is crucial to several native species, including bald eagles and peregrine falcons, which are assessed as special concern by the Committee on the Status of Endangered Wildlife in Canada (COSEWIC).

The 1,018-hectare (2,517-acre) property is composed mostly of coastal boreal forest. Nearly half of Canada’s bird species rely on boreal habitat like Big Trout Bay to complete their life cycle, and many of these species migrate throughout the Americas.

The property also includes 21 kilometres of undeveloped shoreline with towering cliffs, stretches of open bedrock and rugged cobble beach. These shoreline areas are especially important for biodiversity, as they provide varied habitat for species such as bird’s-eye primrose, lake trout and moose.

The Nature Conservancy of Canada has been working to conserve land along Lake Superior’s North Shore for 15 years, and this most recent acquisition brings the total conserved hectares (acres) of protected land that is open to the public for low impact activities, such as hiking, to 3,557 hectares (8,790 acres).

James Duncan, Nature Conservancy of Canada VP for Ontario said, “This is a massive international undertaking, but when faced with the potential loss of habitat and wildlife on the largest freshwater lake in the world, thinking big is essential. Most importantly, this project gives us hope that the landscapes we love today will be here for others to enjoy tomorrow. It’s an extraordinary opportunity to make substantive and tangible progress on our overall goal of protecting Lake Superior’s North Shore.”

“Lake Superior’s Big Trout Bay, McKellar Point and Pine Point represent the last unsecured Great Lakes wilderness on the continent— truly a global gem. After more than 15 years of work personally on this project, I understand the importance of preserving the natural view the Voyageurs saw and, equally as important, the ecosystems that have sustained First Nations for generations,” said Tom Duffus, Midwest Vice President for The Conservation Fund, which provided bridge financing as well as transactional and fundraising assistance to NCC via its Great Lakes Revolving Fund

The areas includes  21 kilometres of pristine coastline, including stretches of open bedrock and cobble beach, the bulk of the Big Trout Bay property is composed of coastal boreal forest. The area is critical habitat for many of Canada’s bird species. Nearly half of Canada’s bird species rely on boreal habitat like Big Trout Bay to complete their life cycle, and many of these species migrate throughout the Americas. Big Trout Bay’s cliff outcrop is also an important breeding ground for the peregrine falcon, a COSEWIC-designated species of “special concern,” and one of the many wide-ranging and migrating species that pass through this greater North Shore landscape.

The Government of Canada’s Natural Areas Conservation Program (NACP) is a unique public-private partnership led by the Nature Conservancy of Canada (NCC). To date, $345 million has been invested in the NACP by the Government of Canada to secure our natural heritage. Additionally, more than $500 million in matching contributions has been raised by NCC and its partners.