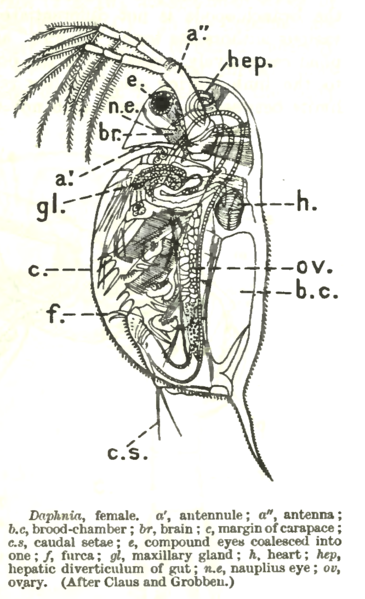 Changes in Canadian lake water chemistry have left small water organisms vulnerable to their predators, which may pose a serious environmental threat, according to a new study.

“At low calcium levels the organisms grow slower and cannot build their armour,” says study lead author Howard Riessen, professor of biology, SUNY College at Buffalo. “Without suitable armour, they are vulnerable to ambush by predators.”

Riessen and colleagues, including York University biology Professor Norman Yan, studied the effect of changes in water chemistry on plankton prey defenses. Specifically, they examined how lower calcium concentrations affect Daphnia (water flea) exoskeleton development. These low calcium levels are caused by loss of calcium from forest soils, a consequence of decades of acid rain and multiple cycles of logging and forest growth. The results were published last week in the Proceedings of the National Academy of Sciences.

“Calcium is a critical element for Daphnia and many other crustaceans,” Riessen says. “Daphnia build their exoskeletons, which include some defensive spines, with calcium to protect themselves from predators. Where calcium levels are low, the Daphnia have softer, smaller, exoskeletons with fewer defensive spines, making them an easy snack.”

This phenomenon of reduced calcium is also playing out on a much larger scale in the world’s oceans, notes Yan, the study’s senior author and a Fellow of the Royal Society of Canada. “Increases in ocean acidity are complicating calcium acquisition by marine life, which is an under-reported effect of global carbon dioxide emissions. Thus marine plankton may also find themselves more vulnerable to predators,” he says.

The public is used to stories about changes in water chemistry that lead to large-scale fish kills, says Riessen. “These changes are more insidious. Daphnia might not be a household name, but they are food for fish, and they help keep our lakes clean. Changing the balance between Daphnia and their predators marks a major change in lake systems.”