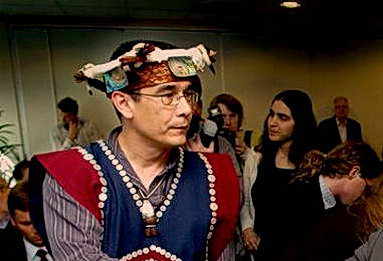 In response to clear-cutting in British Columbia and the effect it may have on drinking water sources, Chief Bob Chamberlin is calling on Premier Gordon Campbell to “act swiftly and personally intervene to ensure the safety of all.”

The Kwicksutaineuk Ah-kwa-mish First Nation fully supports the actions of the Okanagan Indian Band to protect the Browns Creek watershed from the threats posed by clear-cut logging by Tolko Industries, declared Chamberlin yesterday in a press release. “We know firsthand the devastating impacts of contaminated drinking water on the health and well-being of a community,” he said.

The Kwicksutaineuk Ah-kwa-mish First Nation’s drinking water was subject to a Health Canada Do Not Consume order for 10 years. Community effort, lobbying by First Nations leadership, and public demands for action following the emergency evacuation of 800 members of the Kashechewan First Nation due to contaminated water in 2005 resulted in government investment in a number of water purification plants now operating in the village of Gwa-Yas-Dums on Gilford Island.

“We support a land-use process that respects the Okanagan Indian Band’s Title and Rights, protects their drinking water and their archaeological history,” said Chamberlin.