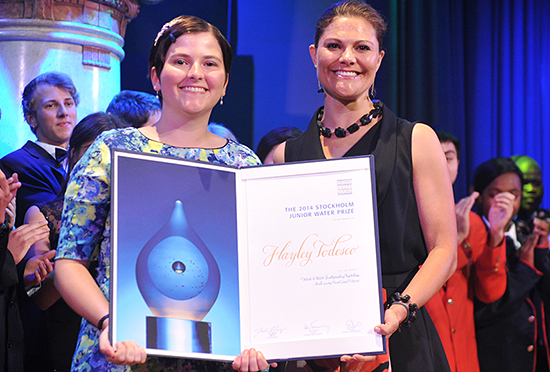 “This year’s winning project addresses a neglected, but pressing, environmental issue,” the jury said in its citation. “The entry displays genuine outside the box thinking. Hundreds of hours of self-driven effort achieved a project that excelled in all judging criteria.”

The jury also noted that Todesco’s invention touches on the water-energy nexus, which has been a major theme in a number of global water events this year.

“Tailings from tar sands pose a serious and growing environmental problem. Slow sand filters may date back to the 19th century, but [Todesco] proved them applicable to 21st century problems,” the jury concluded.

Todesco, who was named the Google Science Fair’s regional winner for Canada in July 2014, received her prize from H.R.H. Crown Princess Victoria of Sweden at an award ceremony during Stockholm’s World Water Week.

“I am shocked, but so grateful,” she said. “I got the idea of using sand filters from a pen pal in Namibia two years ago and started testing them on wastewater in a tank at home. Now I have just started studying to become a microbiologist and I hope to spend a great deal of time in the lab to continue developing the method.”

The International Stockholm Junior Water Prize competition brings together young scientists from around the world to encourage continued interest in water and the environment. This year’s competition had thousands of participants and teams from 29 countries competed in the 2014 finals.