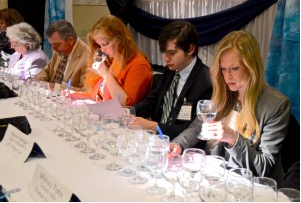 A small neighbourhood in Abbotsford, B.C. has the best municipal tap water in world. Clearbrook won gold at the annual Berkeley Springs International Water Tasting in West Virginia on February 27, 2016.

Municipalities and companies competed in several categories including best tap, bottled and sparkling water. The waters were rated for attributes such as appearance, aroma, taste, mouth feel and aftertaste.

Judges tasted hundreds of waters from 18 U.S. states, seven Canadian provinces and five foreign countries. Clearbrook took first among municipalities in what organizers called the “biggest water competition in the world.”
In Clearbrook, the water from the tap comes from groundwater extracted from the Abbotsford-Sumas aquifer.

However, this isn’t the first gold in this competition for the municipality. Clearbrook has earned four gold medals and other honours in the past 10 years.

The top prize for best municipal water in the United States went to Eldorado Springs in Colorado, while Theoni Natural Mineral Water from Greece beat 27 entries for the best bottled water title and Tesanjski Kiseljak of Bosnia won for best sparkling water.

Other notable wins for Canada came Prairie Crystal Pure Spring Water and Touch Sparkling Mineral Water (both are bottle and sourced in Marchand, M.B.). The former came second in bottled water and the latter placed second for best sparkling water.

“It was another wonderful year for the longest running and largest water tasting in the world,” said Berkeley Springs’ perennial water master, Arthur von Wiesenberger, in a news release. “Berkeley Springs is the Academy Awards of water.”