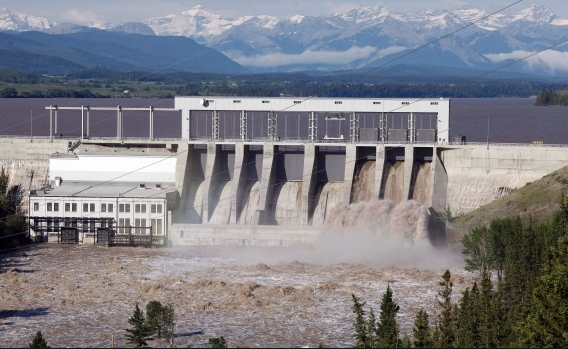 The tradeoffs between water, energy, and climate change are being handled cooperatively in Alberta through a new five-year agreement between the provincial government and TransAlta.

The new agreement will allow the province to modify operations at Ghost Reservoir for flood mitigation purposes from May 16 to July 7 each year, and adjust reservoir levels at three Kananaskis-area reservoirs year-round to supplement flows on the Bow River during dry periods, or provide additional flood storage.

Mayor Naheed Nenshi said, “This is a positive step towards collaborative water management in the Bow River basin. Successful implementation hinges on the flexibility and responsiveness of water managers to flood and drought conditions, and provides the opportunity for all of us to learn by doing.”

Kim Sturgess, CEO of Alberta WaterSMART said, “The water users of the Western Irrigation District are pleased to see that the province is balancing flood and drought mitigation. We want to make sure there is enough water to grow crops in a dry year. Good water management and collaboration are the keys to dealing with both flood and drought.”

Through the terms of the agreement, the Alberta government will pay TransAlta $5.5 million in compensation annually for five years to offset the impacts that modified operations will have on TransAlta’s ability to generate power at these facilities.

Shannon Phillips, minister of Environment and Parks said in a new release that, “Both flood and drought are serious concerns in southern Alberta. This agreement provides more storage capacity and greater flexibility to help protect communities along the Bow River from the potentially devastating effects of flood and drought, and the uncertainties of a changing climate.”

Initial reservoir target levels will be set prior to each operating season based on the provincial Water Supply Outlook, snowpack and soil moisture conditions, and prevailing weather patterns. However, water levels will fluctuate during the modified operations period to reflect ongoing risk assessments for both flood and drought.