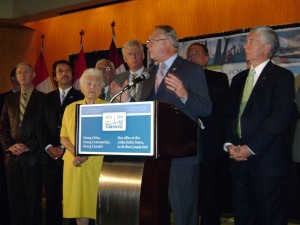 Last week the leaders of Canada’s 22 largest cities threw their support behind a resolution by Mayor Peter Kelly of the Halifax Regional Municipality, calling on Ottawa and the provinces to help fund the cost of implementing new national wastewater regulations.

Mayor Kelly introduced the resolution during last week’s meeting in Toronto of the Big City Mayors’ Caucus (BCMC). In thanking the other mayors for their support, he expressed optimism that both senior governments would share the anticipated financial burden equally with municipalities. “History shows that this country works best when all three levels o government cooperate for the common good,” said Mayor Kelly. “We have enjoyed much goodwill and cooperation lately and I have every confidence this partnership will continue, enabling us to reach a fair solution to the onerous financial burden represented by the new wastewater strategy.”

Mayor Kelly noted that, without a cost-shared funding plan, the new wastewater standards will add more than 10 per cent to Canada’s $123-billion municipal infrastructure deficit and increase water and wastewater charges for hundreds of thousands of households and small businesses, most still recovering from the recession. In HRM alone, it’s estimated that the extra cost could run as high as $2 billion.

The new, more stringent wastewater treatment standards were agreed to earlier this year by Ottawa and the provinces. The new regulations also set standards for combined sewer overflows and sanitary sewer overflows, which would mean extensive work to bring older parts of Halifax and Dartmouth into compliance.

The support for Mayor Kelly’s call for a continued intergovernmental financial partnership reflected the mood of the delegates attending the Big City Mayors’ Caucus.

According to Kitchener, Ontario’s Mayor Carl Zehr, chair of the caucus, as the federal government gets closer to ending its two-year Economic Action Plan, it needs a new partnership with municipalities to prevent growing national challenges from turning back recent gains in cities and derailing the country’s long-term economic recovery.

“Ten months from now Ottawa is going to turn off the stimulus taps,” said Mayor Zehr, ”but it needs to expand that underlying partnership so we can solve problems that crisscross political boundaries and affect Canadians living in every single part of the country.”

UPDATE: During the conference, delegates welcomed a commitment by federal Environment Minister Jim Prentice to open a new dialogue with municipalities on the implementation of costly new federal wastewater regulations requiring cities and communities to rebuild more than 25 per cent of Canada’s wastewater treatment systems.