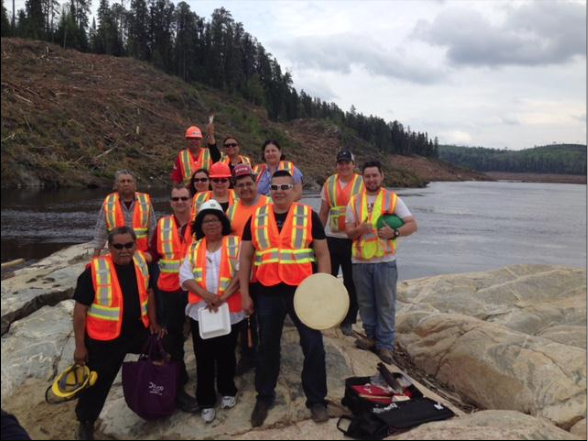 The Pic Mobert First Nation is the recipient of a 2016 Ontario Waterpower Association Innovation Award for solving an energy infrastructure dilemma while safeguarding drinking water quality.

Ontario Waterpower Association awards recognize “those organizations that have shown leadership in innovation through the development of important advancements which will result in benefits to the waterpower industry.”

The Pic Mobert First Nation use of White Lake and the surrounding river systems have diversified to include recreation and economic development in addition to traditional activities (trapping, hunting, transportation, etc.). And, as of spring 2016, the lake has been used as a source of drinking water for the community.

The old White Lake Dam, established in the 1940s, was previously owned and operated by the Ontario Ministry of Natural Resources, and posed a risk of failure.

The Pic Mobert First Nation was challenged to identify options to increase the power production at the GAH generating stations without increasing pressure on the watershed or jeopardizing their drinking water supply and with an aim to manage flood waters.

As such, the project partners evaluated the incorporation of micro-turbine generator units (MTG) into each of the regulating dams.

The MTG’s are a low-impact technology, with 10 per cent of the environmental footprint of a conventional microturbine system, allowing the powerhouse being integrated directly into the regulating dam. The MTG is flood proof and the Pic Mobert First Nation does not expect spillage or contamination from production fluids as result of their use, thereby safeguarding the community’s water supply.

The Na tah me sah ka mig People of the Pic Mobert First Nation have lived on and from the lands and waters of the White River watershed, since well before European colonization.

More information on the Ontario Waterpower Association can be found at their website.