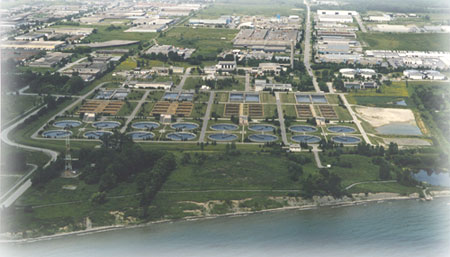 The governments of Canada and Ontario have set aside a total of $93.3 million in funding to support the Duffin Creek Water Pollution Control Plant in Pickering.

The governments of Canada and Ontario will each set aside up to $46.67 million and will work with the Regions of York and Durham to upgrade the Duffin Creek Water Pollution Control Plant. Current capacity of the plant is anticipated to be exceeded by 2010.

The Duffin Creek Water Pollution Control Plant is one of the largest sewage treatment plants in Canada. It is jointly owned by the municipalities of York and Durham. The plant receives and treats 90 per cent of the wastewater generated by the citizens of York Region, and also serves residents of Pickering and Ajax in Durham Region.

This project is one of eight that the governments of Canada and Ontario have recently announced, totalling $336.9 million in federal and provincial funds, in support of improved wastewater treatment in communities located near the Great Lakes. Other communities that will benefit from improved wastewater treatment include Nipigon, Red Rock, Cornwall, Timmins, Halton Region, Owen Sound and South Dundas.

This wastewater treatment improvement project will help Canada and Ontario meet objectives under federal-provincial, as well as international water quality agreements, including the Great Lakes Water Quality Agreement, which expresses the commitment of Canada and the United States to restore and maintain the integrity of the Great Lakes Basin Ecosystem under the Boundary Waters Treaty.