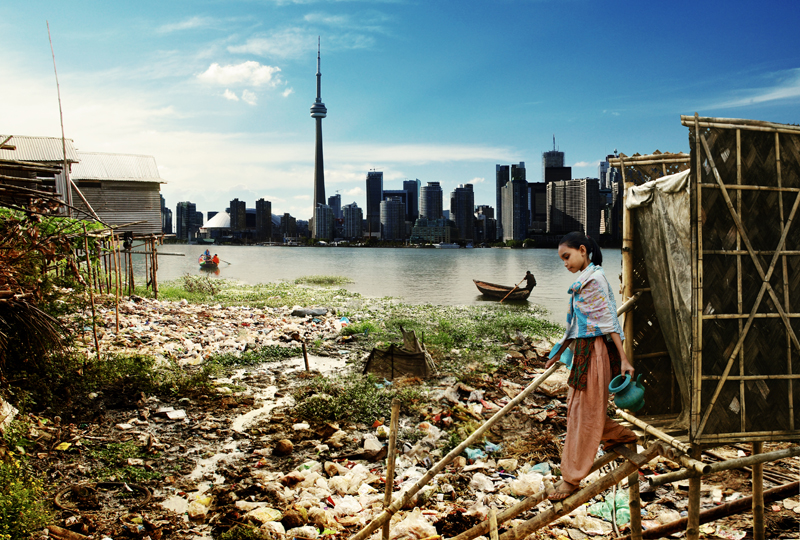 WaterAid has taken a creative approach to shed light on the world’s water and sanitation crisis. The international charity that works to provide clean water and water systems to millions around the world released four images that show what notable Canadian cities would look like without clean water or toilets.

As part of WaterAid Canada’s launch into the global organization as WaterCan, the campaign uses Toronto, Calgary, Vancouver, and Ottawa as backdrops in the doctored images. The Photoshopped pictures show men, women, and children completing tasks like carrying jugs of dirty water or collecting water from the lake amid famed Canadian skylines and landmarks.

“By taking scenes of people without safe water and sanitation, which are far too common in many developing countries, and placing them in our own cities, we’re hoping to highlight this global crisis,” said WaterAid Canada’s chief executor, Peter Allen. “Improving access to water and sanitation is a cheap and cost-effective solution in helping overcome poverty. Just $25 can get safe water to one person for life, which can in turn impact on their health, education and livelihoods. At the moment, all donations to WaterAid Canada are being matched, meaning your $1 can become $5, delivering five times the impact.”

According to the charity, one in 500,000 children under the age of five die annually from diarrhoeal diseases caused by dirty water and poor sanitation.