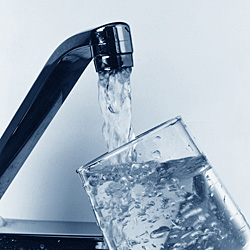 Freshwater is a resource that Canadians value. According to the 2013 RBC Canadian Water Attitudes Study, in fact, 47 per cent of Canadians believe that fresh water is Canada’s most important resource. But do Canadians see the connection between the water we prize in nature and the water we use in our homes? During a webinar conducted to present the survey’s findings, Bob Sandford, the Canmore, Alberta-based water expert, said that Canadians don’t have a clear sense of the fact that the water in nature is the same water that runs from our taps, and not having this sense is like thinking that the taps themselves create drinking water. There is a need, he added, to do more work to help Canadians understand the link, and to foster knowledge about the crucial role of infrastructure in bringing water to our taps and taking it away.

The annual study, now in its sixth year, is conducted with the aim of tracking and monitoring trends concerning the Canadian public’s attitudes toward water. This year’s study looked at water in urban settings, with a particular focus on the public’s knowledge about the infrastructure of municipal water systems.

The study found that Canadians highly value the infrastructure that supplies drinking water, ranking it second to hospitals in terms of the priority of government funding they think it deserves. But the infrastructure for stormwater management rated very low on the list of priorities, perhaps lower than its actual importance, considering, as Sandford pointed out, the increasing frequency and duration of extreme weather events.

Regarding predicting what the greatest water-related problems will be 10 years from now, the participants of the survey replied that water pollution and the safety of drinking water are the most pressing issues, while problems concerning the state of wastewater treatment systems, the state of stormwater management systems, and the threat of flooding from extreme weather are among the least important.

Among Canadians who use municipal water, those who believe the infrastructure is in good condition outnumber those who are concerned about the condition by a ratio of four to one, which indicates that the public has an optimistic view which may not correlate to the actual state of many municipal water systems. And while seven in 10 Canadian’s support taking precautionary action to prepare for a disaster that affects storm water management, such as Hurricane Sandy, the majority believes there is no need to invest in such precautions at this time.

The study also found there is little willingness to take measures to ensure safe drinking water, with only 20 per cent of participants saying they would pay, through taxes or their water bill, into an infrastructure fund to upgrade drinking water or wastewater facilities, and just 17 per cent would do the same for stormwater management facilities. Also, only 12 per cent of participants strongly supported having consumers pay the full cost of water delivery, sewage, water treatment, and storm water management.

Overall, the study found that among the public there is a great deal of ongoing concern about water, and a general appreciation of its importance, but the public’s focus is mainly on water quality, with limited engagement on infrastructure. Sandford said that this lack of engagement is partially caused by Canadians taking water for granted: it flows from the taps without us having to think about how it gets there—it might as well be created by the faucets.

But if the public has more knowledge, water might not be taken for granted any longer. The study demonstrated that Canadians are receptive to new information about water. When asked what kind of driveway they think is ideal, 47 per cent said a paved driveway, and 47 per cent said a water-permeable driveway such as gravel or interlocking stones. But when informed of the water management benefits of unpaved surfaces, 46 per cent of those people who thought a paved driveway was ideal changed their opinion and said they would prefer a water-permeable driveway. This receptivity, combined with the finding that 38 per cent of Canadians pay attention to news and other information about fresh water issues, suggests there is a need and an audience for more information, an audience that Canada’s water sector might find it worthwhile to address.