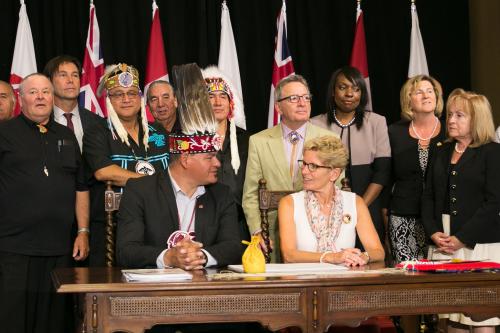 “As we mark World Water Week, Canadians must be reminded that far too many First Nation communities in Ontario, and across the country, do not have access to clean drinking water,” said Regional Chief Day. “While the federal Liberal government pledged to end all BWAs within five years, not enough progress has been made to date.”

According to the Stockholm International Water Institute (SIWI), organizers of World Water Week, lack of access to clean water is “mainly rooted in poverty, power, and inequality, not in physical water scarcity. It is, first and foremost, a crisis of governance. Poor resources management, corruption, lack of appropriate institutions, bureaucratic inertia, and insufficient capacity lie in many places behind the lack of sustainability of services, which also undermine the arrival of new investments.”

“Unfortunately, this statement by the SIWI perfectly describes the situation right here in one of the most advanced and wealthiest counties in the world,” said Regional Chief Day. “The political will to end contaminated water is there—both Prime Minister Trudeau and Premier Kathleen Wynne have repeatedly made commitments. However, the wheels of bureaucracy have been turning far too slowly. There truly has been “a crisis of governance” for many decades. The new federal Minister of Indigenous Services, Jane Philpott, must shake up the bureaucracy in order get results.

“The five-year commitment to end BWAs is nearly half-way through its mandate. There are still at least 43 BWAs in Ontario alone,” he said. “BWAs do not end by breaking ground on a new water plant in the middle of the summer while waiting for construction that may be years down the road. For example, yesterday I visited the Chapleau Cree First Nation, who still do not have a new water plant after INAC began the process in 2010.

“We need both levels of government to cut through the bureaucratic red tape once and for all. Now is the time to do whatever it takes to physically build long-lasting infrastructure over the next two years.  Next year, we want to celebrate World Water Week by announcing that all First Nation communities have their clean water projects underway. In 2019, we want to announce: Mission Accomplished.”

The Chiefs of Ontario is an advocacy forum and a secretariat for collective decision making, action, and advocacy for the 133 First Nation communities located within the boundaries of the province of Ontario, Canada.

Cover Photo Courtesy of the Chiefs of Ontario.