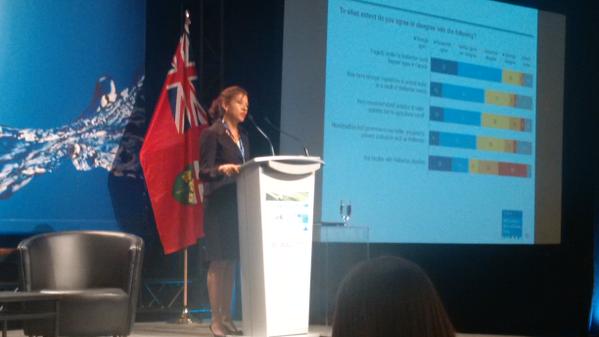 The Canadian Water Network’s Connecting Water Resources (CWR) 2015 conference is in full swing in downtown Ottawa. The biennial conference attracts Canadian water professionals from all sectors, and this year features speakers from countries around the world, including South Africa, the Netherlands, and Singapore.

One highlight from Wednesday’s morning session was a sneak peek at Royal Bank of Canada’s upcoming 2015 Canadian Water Attitudes Study. The annual report, which has been published since RBC began surveying Canadians on the subject in 2008, offers insights into the public’s relationship with water.

While the full report will provide far more in-depth analysis, the CWR audience learned that Canadians are generally confident in the quality of their drinking water: 82 per cent of Toronto residents expressed satisfaction with their drinking water, while in Vancouver and Calgary, that number approached 90 per cent. Canadians also ranked drinking water as the second most important destination for their tax dollars, behind only hospitals.

The Canadian Water Attitudes Study is part of RBC’s Blue Water Project, a 10-year, $50-million global commitment to help provide safe access to water for future generations. The 2015 edition of the study will be released later in March, around the same time as the release of another public attitudes study by the Canadian Water and Wastewater Association.

In addition to the teaser for the RBC study, CWR 2015 featured two rousing plenary sessions on March 11. The first, chaired by IBM Canada’s Jean-Francois Barsoum, featured speakers Patricia Mulroy and Charles Vorosmarty of the United States, and Harry Seah of Singapore. The second was chaired by POLIS Project’s Oliver Brandes and included Barb McMurray of the Ontario Ministry of the Environment, James Arnott of Environment Canada, and David Marshall of the Fraser Basin Council.