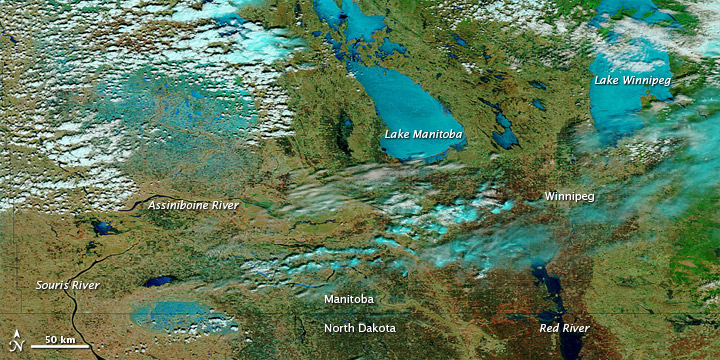 Epic melts occurred everywhere, says EC’s website, from the Qu’Appelle Valley to eastern Manitoba and from The Pas south to the Canadian-American border—resulting in more acreage under water than ever recorded. Statistically, the flooding on the Assiniboine River in 2011 was estimated to be at levels experienced once in 330 years. On Lake Manitoba, engineers called the flood a one-in-2,000-year event. Governments at all levels spent close to $1 billion on flood fighting and victim compensation. Read more about the flood here.

#3: The Richelieu River flood, arguably the worst overland flooding in southern Quebec since Confederation and Quebec’s worst natural disaster since the Saguenay flood in 1996.

#6: Hurricanes Irene, Katia, Maria, and Ophelia in Atlantic provinces. During the peak of the storm, Irene left nearly one-quarter of a million Quebecers  in the dark and some 50,000 customers in New Brunswick and 8,000 in Nova Scotia without power.

#8: Arctic sea ice reaches a record low. Arctic sea ice cover fell below 4.33 million square kilometres on September 9, 2011, with only 310,000 square km more than the previous record of minimal ice extent in 2007—the lowest seasonal ice minimum extent since record-keeping began more than 50 years ago. This year’s minimum level was 35 per cent below the 1979 to 2000 average minimum of seven million square kilometres.