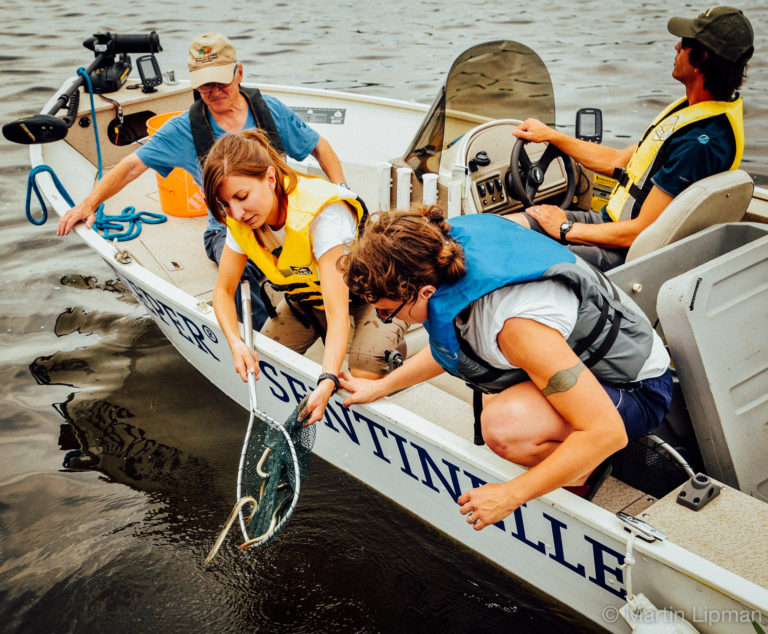 The eel release was part of a collaboration with the Canadian Wildlife Federation, with the ultimate goal of improving the passage of eels at the first two hydroelectric dams on the Ottawa River—Carillon and Chaudière. Eel passages at these two strategic locations would reopen 200 kilometres of their historic range.

“Over 98% of the Ottawa River population has now collapsed,” said Patrick Nadeau, executive director for Ottawa Riverkeeper. “We can’t stand by idly while the last eels—a very important species, particularly for First Nations—disappear from our watershed.” This is largely due to dams along the Ottawa River.

Spawning in the Sargasso Sea, the eels swim up the Atlantic coast, entering the St. Lawrence River to reach the Ottawa River, where they will reside for up to 25 years. Of the 19 major dams on the Ottawa River, only one dam operator is currently making modifications to improve eel passage. The lack of habitat access causes many eels to die during migration.

This past year, Hydro-Ottawa installed an eel ladder and turbine by-passes at the Chaudière dam.

“The eels we’re releasing are coming from the Hydro-Québec Beauharnois dam, located in the St. Lawrence River, where there is a fully functional eel ladder to aid upstream passage. Transporting the eels allows them to bypass the Carillon Dam, a major obstacle to their migration upstream,” said Adèle Michon, director of operations in Quebec for Ottawa Riverkeeper. “We hope to tag at least 400 eels and release them from Petrie Island, which will help us understand where we can best help this species.”

Despite the valuable information provided by the trap, transfer, and re-release, it is only a temporary measure. While the American Eel has been declared endangered by the Ontario Ministry of Natural Resources and Forestry, the Ontario government has yet to release its Government Response Statement on how to recover this species. After many delays, the statement is expected this summer.

“In collaboration with several partners, including the Canadian Wildlife Federation, the ministère des Forêts, de la Faune et des Parcs of Quebec, Ontario Ministry of Natural Resources and Forestry, Ontario Power Generation, Hydro Ottawa and Hydro-Québec, we are determined to reverse this deplorable trend,” said Nadeau. Ottawa Riverkeeper and the CWF also hope that events such as the eel release will increase awareness and continue to push for infrastructure upgrades in the Ottawa River.