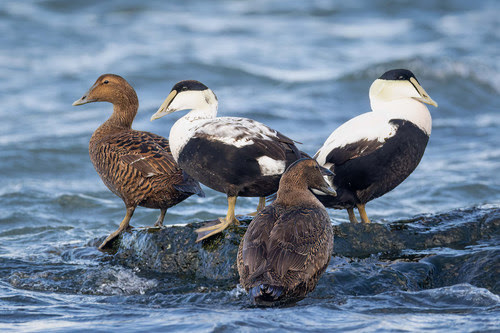 Oak Hammock Marsh, MB – The 15 species of waterfowl known as sea ducks constitute more than a third of the duck species breeding in North America, yet they are the most poorly understood group of waterfowl. Filling this knowledge gap was the impetus behind a new cross-border effort that’s putting sea duck conservation on the map—and shedding light on how we can help protect important habitat for these birds.

The Sea Duck Key Habitat Sites Atlas was created by a team of conservation researchers from across North America. Using the best available science and strict criteria, they identified the most important areas, at a continental scale, for birds that frequent the coasts as well as areas of the boreal forest and Arctic tundra. This information is key to understanding why these sites are important and how we can best protect them for sea ducks and other wildlife.

The sea duck atlas is an initiative of the Sea Duck Joint Venture, a partnership under the North American Waterfowl Management Plan. Ducks Unlimited Canada (DUC) research biologist Nic McLellan played a lead role in the creation of the atlas.

“By knowing which areas are most important to sea ducks, we can incorporate this knowledge into future conservation planning,” says McLellan. “It will also be very useful in helping to avoid environmental impacts and evaluate environmental assessments.”

Sea ducks that frequent North America include eiders, scoters, mergansers, goldeneyes as well as buffleheads, long-tailed ducks and harlequin ducks. They are an important subsistence food for northern communities and are becoming more popular among hunters. Sea ducks are also among the most ornately coloured of waterfowl, making them a favourite among photographers and birdwatchers.

The sea duck atlas identified 85 sites as providing critical habitat for these birds, many of which are in Canada. McLellan says, “The majority of North American sea ducks breed in Canada and many stage or winter along our coasts, including the Great Lakes. We know that having healthy habitats is critical for population success. Today, coastal development, environmental risks such as oil spills and the impacts of climate change are posing significant threats to these habitats.”

Here’s a look at some key landscapes where DUC is actively working to support sea duck populations through innovative science and on-the-ground conservation:

“Waterfowl are often held up as a conservation success story, with populations rising by approximately 150 per cent since the 1970s,” says McLellan. “Sea ducks, however, are an exception. We must apply the same conservation effort and attention to these species to ensure they, too, will thrive. The creation of the sea duck atlas is a significant first step in this direction.”

The Sea Duck Key Habitat Sites Atlas is available for download and will be a valuable tool for other habitat Joint Ventures, marine and land-use planners, Indigenous groups, developers, environmental consultants, natural resource agencies, wildlife conservation groups and other stakeholders.