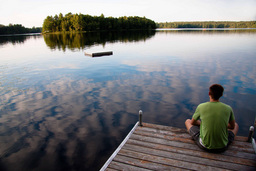 While the majority of Canadians (55 per cent) continue to believe that fresh water is the country’s most important natural resource and say they are trying reasonably hard to conserve it (78 per cent), almost three quarters (72 per cent) admit to flushing items down the toilet that they could dispose of in another manner. Left-over food, hair, bugs and cigarette butts lead the list of items discarded in toilets across the nation, wasting an average of six to 20 litres of fresh, clean water with each flush.

According to the fourth annual Canadian Water Attitudes Study, commissioned by RBC and Unilever and endorsed by the Canadian Partnership Initiative of the United Nations Water for Life Decade, Albertans (83 per cent) are most likely to admit to flushing items they could dispose of in another manner, and Quebecers least likely (65 per cent). And young Canadians, 18 to 34, are much more likely than those aged 55 plus to engage in the offending behaviour (84 per cent vs. 63 per cent, respectively).

“This data highlights, once again, that Canadians are not making the connection between their personal water use and the true value of water,” says Bob Sandford, EPCOR Chair, Canadian Partnership Initiative of the UN Water for Life Decade. “They claim to care about conserving it, yet knowingly engage in water wasting activities, including using fresh, clean water to dispose of garbage. Canadians need to understand that water is a finite resource and there are significant social and economic implications related to wasting it.”

According to the study, Canadians are in the dark when it comes to the cost of water.  While six in 10 (61 per cent) admit they do not know how much their household currently pays for water, they actually have a strong opinion about its cost: seven in 10 (70 per cent) believe that the unknown price is high enough to ensure water is treated as a valuable resource.

“Water is a real bargain in Canada, which is another reason Canadians have no concept of its value,” says Sandford. “Compared to other developed nations, Canadians pay very little to have water delivered to their homes. In France, water costs four times more, and in Germany, almost seven times more. Not surprisingly, average daily domestic water use in these countries is less than half of what it is in Canada. Until Canadians make the connection between personal use of water and its true value, our water wasting habits will continue.”

See the results of the entire study (pdf).