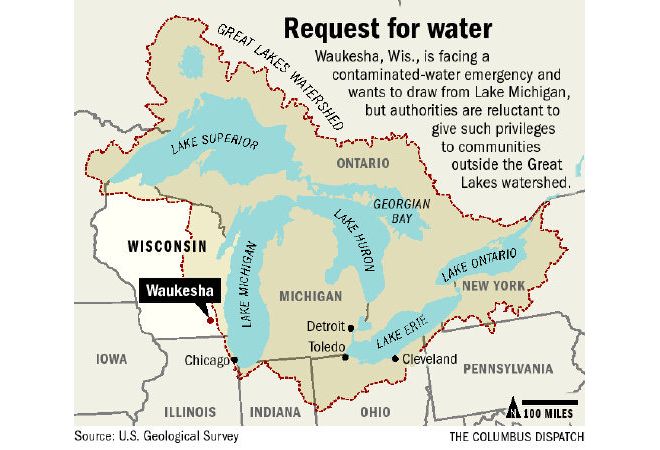 The Great Lakes and St. Lawrence Cities Initiative–composed of Great Lakes mayors–is requesting a hearing to challenge the decision to allow Waukesha to divert water from Lake Michigan.

Denis Coderre, the Mayor of Montreal and new chair of the Cities Initiative said, “For the Compact Council to grant an exception to the first application that does not meet the conditions of the Compact sets a very bad precedent. To make sure the Compact and Great Lakes are not compromised in the future, this decision should be overturned.”

The Cities Initiative has expressed opposition to the approved diversion during the course of the proceedings on a number of issues, including the availability of reasonable alternatives to Waukesha for water supply, the impact of the return flow of Waukesha sewage on the Root River, and the service area that includes communities that are not part of the City of Waukesha.

Now that the Compact Council has approved the diversion, the group is concerned that it will set a precedent for future applications.

“This decision opens the door to every neighbouring city and county to the Great Lakes and St. Lawrence Basin in the U.S. and Canada to get water from the basin without meeting the conditions of the Compact. This is not in the best interest of these resources that are so important to our region,” said Mayor Paul Dyster of Niagara Falls, New York, Vice Chair of the Cities Initiative.

The Mayors of the Cities Initiative were also disappointed with the public consultation provided during the review and approval process. The only public hearing held by the Regional Body that recommended approval was held in Waukesha, which is hardly representative of the people in the Region.

When the final decision included conditions related to some of the problems with Waukesha’s application, no opportunity for comment was permitted on those changes.

Mayor Sandra Cooper of Collingwood, Ontario, Secretary/Treasurer of the Cities Initiative, added, “We are taking this step to launch a legal challenge to the Compact Council’s decision regarding the Waukesha water taking application because we do not feel that Waukesha met the rigorous standard set in the Compact to qualify for an exception to the ban on water diversions to communities outside of the basin.”

The Cities Initiative has also written President Obama, Prime Minister Trudeau, and the International Joint Commission requesting appropriate action within their authority to stop the diversion.

IJC Report on Nuclear Power in the Great Lakes Basin