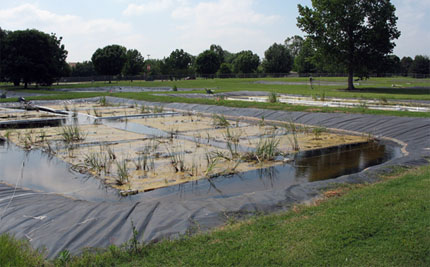 Researchers from Saint Francis University in Pennsylvania and the University of Oklahoma have undertaken a study on the use of floating treatment wetlands (FTW) as a wastewater treatment technology.

The materials used to construct the FTWs included drainpipe, burlap, mulch, utility netting, and reused plastic bottles. Researchers then spent three years measuring the effect of the floating wetlands on the water column below the FTWs, comparing them to open water control ponds. Both the FTW and control ponds were fed with well water enriched with nitrate to emulate agricultural ponds.

The findings suggest the ability of the FTWs to better regulate the water column: “Although observed differences were relatively small, statistically significant differences were noted. With respect to the control, waters underneath FTWs had lower dissolved oxygen, sulfate, nitrate, and pH, dampened diurnal temperature fluctuations, and greater alkalinity.”

The study didn’t directly investigate the processes that allowed the wetlands to affect the water. However, the researchers believe that the plants themselves could be taking up some contaminants, but Strosnider suggested that microbes might have the biggest effect. The base and roots of the floating wetlands provide ideal conditions for microbes. There they carry out processes that break down or absorb nitrogen and phosphorus.

The treatment process investigated by Strosnider et al. could lend itself to multiple applications, including the treatment of municipal wastewater or agricultural ponds. Water bodies that suffer from algal blooms could also benefit from FTWs as the can regulate water temperature and limit the exposure of water bodies to solar radiation.

Most interesting to Strosnider was that the floating wetlands could have the added impact of increasing habitat for aquatic and wetland species such as fish, water fowl, and insects. “The area directly beneath the floating wetlands is high quality habitat, as small fish and amphibians can use the maze of roots to hide from predators,” he explains. “In general, the value of habitat that floating wetlands, or any type of treatment wetland, can provide has been poorly studied. We took a small step forward with our study,” he said.

Another primary goal of the research was to understand how the FTWs could be self-sustaining and requiring of little maintenance. Strosnider makes the distinction between intensive floating wetlands that rely on plastic or styrofoams to function and extensive wetlands that grow and remain floating independent of human intervention.

The article can be read in full in the Journal of Environmental Quality.

Study: Stormwater management ponds may not hold the solution for depleting...