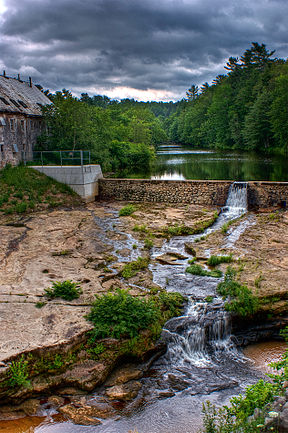 The first ever Nova Scotia Watershed Atlas and geodatabase, which examines the health and stressors of the province’s watersheds, has been released by the Hydrology Research Group at Dalhousie University and Nova Scotia Environment (NSE).

Findings show that many of Nova Scotia’s small coastal watersheds are facing relatively high levels of stress. Since much of the population lives in these areas, threats to water quality and supply in the watersheds can be of particular importance.

The Nova Scotia Watershed Assessment Atlas and geodatabase presents research on watersheds across the province in an easy to understand package, making the information useable to both the government as a management tool, and to the public as an educational tool. It culminates three-and-a-half years of gathering, checking, and analyzing spatial information on Nova Scotia’s watersheds.

These assessments can reveal increased opportunities for risk prevention and realistic goals for watershed restoration. High-level assessments are a particularly effective tool for evaluating threats such as urban runoff pollution, which has an impact that is not easily monitored or detected from the monitoring of rivers alone.

According to Shannon Sterling, director of Dalhousie University’s Hydrology Group, “We have developed a model that identifies the threats to our watersheds, and which watersheds have the most stresses. We examine stresses related to water quality, stream habitat, flow change, and surface erosion. The watersheds that pop up as being among the most stressed are those containing highly developed coastal communities, such as Cornwallis, Cunard watersheds around Wolfville, the Sackville watershed near Halifax, and the Sydney watershed, near Sydney.”

Nova Scotia is unique as it is composed of many smaller watersheds that flow directly into the ocean, as opposed to being dominated by large watersheds (as seen in Alberta, New Brunswick, Saskatchewan, Manitoba, and British Columbia). This pattern of plentiful small coastal watersheds highlights a particular need for high-level watershed planning in Nova Scotia.