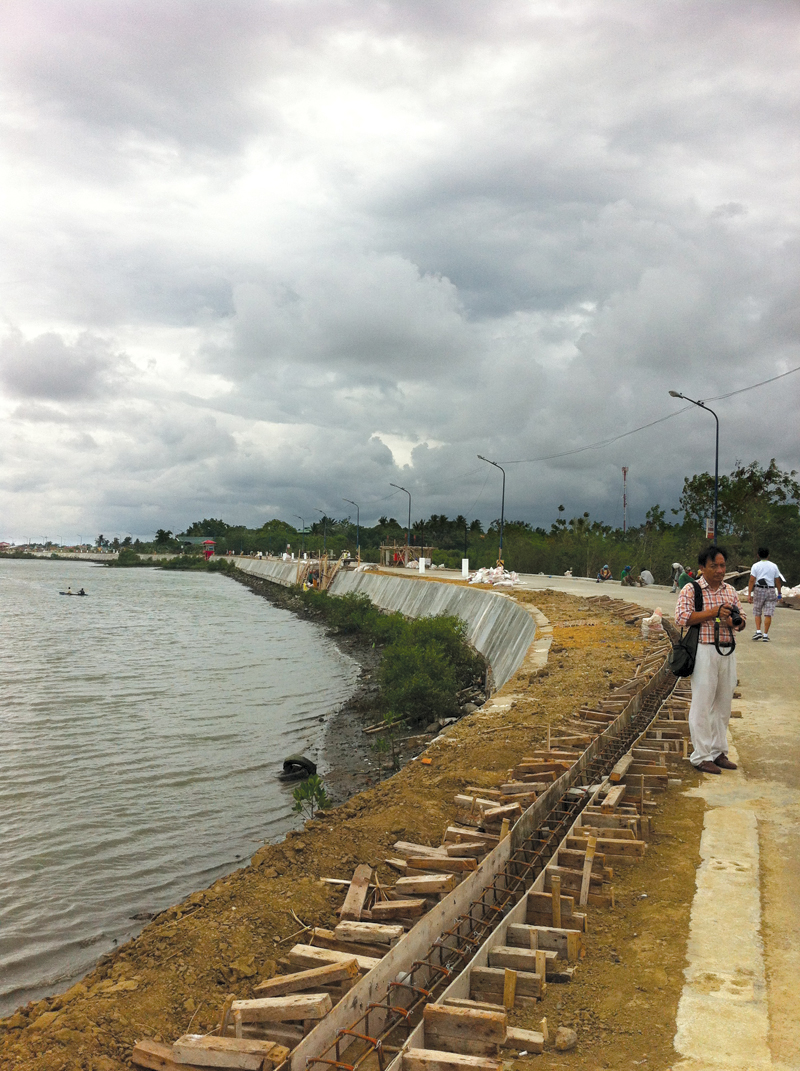 The Canadian Urban Institute (CUI) has a long history of working in the Philippines. It all started in 1993, when the country’s national government invited CUI to to support the newly created Province of Guimaras. CUI helped the province to chart its evolution and engage communities in the planning process.

With funding from the Canadian International Development Agency, CUI supported the establishment of a metropolitan authority, the formulation of a regional growth strategy, the creation of an economic development strategy and an economic development office, and the advancement of priority projects related to the economy, environment, and infrastructure. Over a ten-year period, the project teams witnessed a significant reduction in poverty, especially in the rural reaches of the region.

In the face of these successes, however, the region was hit hard by two major disasters: the sinking of an oil tanker that ravaged coastal areas in 2006, and a flood event triggered by Typhoon Frank in 2008.

“These two events reversed many of the development efforts achieved over the past decade, destroyed livelihoods—especially those of fishers and small-scale tourism operators—and tested the region’s collaborative governance capacity,” says Cavicchia.

“It became quite evident that there are poor linkages between the main urban centre of Iloilo to the municipalities in the upland areas of the urban watershed,” she says. “Environmental sustainability had not been integrated into Iloilo’s plans and activities, and there were no mechanisms in place to deal with the full geographic extent of the bio-region.”

The MIG Bio-Region covers the watershed area formed by two rivers: Tigum and Aganan. The watershed serves almost 350,000 people spanning eight municipalities, including the regional centre—Iloilo City—and the municipality of Maasin. Located in the headwaters, Maasin is the source of Metro Iloilo’s potable water.

While it is the source of life, the watershed also threatens livelihoods, property, health and even life. The urban sprawl radiating from Iloilo City to all the municipal town centres has witnessed the extremes: water shortages in seasons of drought and extreme flooding during seasons of rain.

When Typhoon Frank hit the region, it brought to the fore the importance of coordinated and effective management of the region’s watersheds and water resources.

“Typhoon Frank told us that politics don’t matter,” says Sherwin Bering, the deputized civil defense officer for the Municipality of Alimodian. “It said that if we don’t cooperate amongst ourselves, it will come after us again.”

CUI’s role is to help its Philippine partners to raise awareness of regional environmental and disaster risk issues and to build support for concerted and joint action.

Diagnosing the state of the watershed

In 2010, the existing Tigum-Aganan watershed management plan expired, giving the MIG a prime opportunity to undertake a more extensive participatory process using the new bio-regional outlook. The first step was a diagnosis of the current situation: a state of the watershed report and subsequent report card.

Gary Wilkins, a watershed management specialist at the Toronto and Region Conservation Authority (TRCA), is part of a team working toward an updated watershed management plan for the Tigum-Aganan rivers catchment area in the province of Iloilo. As a CUI partner, he is also helping to produce the region’s first state of the watershed report.

Choosing and developing the indicators for a report in the Philippines isn’t much different than what Wilkins would do at the TRCA. “They have mountains; we have the Oak Ridges Moraine. Both have headwaters issues. There are a lot of similarities,” he says.

While working on the report, the team has also been conducting some primary research to understand the public’s perception about the health of the watershed and how community organizations and individual citizens participate in the watershed planning and management processes. Some of the key concerns included flood control and siltation/erosion of the riverbanks.

The studies also highlighted the need for more environmental education throughout the region. According to results, a large percentage of the population is not aware of the extent of the watershed or how their own activities may affect others in the upstream or downstream part of the region.

Even so, Wilkins says he was surprised by how readily local partners have adopted the concept of managing the environment on a watershed basis rather than a political one.

“When they said I was going to a developing country, I had no expectation that they would be this far along. I thought it’d be more rudimentary—that was probably the biggest surprise.”

Wilkins says that when he first arrived, TAWMB had already gathered partners from government, NGOs, and grassroots organizations. “They understand that one group can’t do it individually. Now it’s just mustering the resources to do what they have to do, and fast.”

Those resources present a major challenge. TAWMB has no budget, and its members all volunteer their time. On top of everything, says Wilkins, developing countries are often dealing with issues that trump the environment.

“There’s a lot of poverty and survival issues to be dealt with today and tomorrow, let alone 10 to 20 years from now,” he says. “TAWMB has the bigger vision, but has to do what it can in the short term.

In the next few years, the objectives are to find ways for the stakeholders to work together, identify water-saving techniques for both urban and rural areas, and identify solutions to some of the watershed’s current issues. They hope the report will help to answer some of these questions and garner some support for the resulting watershed management plan.

“The program will also support an analysis of the state of the coastal zone and contribute towards a MIG Bioregion Disaster Reduction and Management framework,” she adds. “Through these processes, the project will strengthen collaborative horizontal linkages between upland, lowland and coastal LGUs in the region.”

When CUI’s involvement comes to a close, Cavicchia hopes to see the community continue the plans. “We want to see them make decisions on growth and development that enhance the watershed while still contributing to the local economy.” They’re also working on a guide to developing watershed plans with the aim to share it with other communities.

“And, of course, we hope that the health and management of the watershed will improve, communities will have safe and stable sources of water for drinking, and irrigation and that climate-related events will have less impact,” Cavicchia adds.  WC

—With files from the Canadian Urban Institute. Kerry Freek visited Iloilo in May 2012 to participate in the 1st Philippine International River Summit.