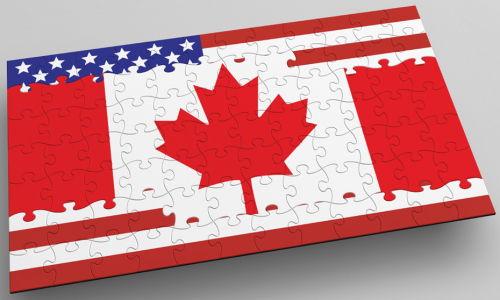 With Canada’s infrastructure crumbling and so many water and wastewater treatment plants in need of upgrading, there is little wonder that U.S. companies are eyeing Canada as a place for expansion.

There are a number of catalysts for companies from the U.S. to be interested in Canada. For starters, the high Canadian dollar has made any good or service from the U.S. very cost competitive. Secondly, there is a huge infrastructure deficit for water and wastewater works. Finally, there is the capitalist need to expand.

The global water and wastewater treatment market has been growing rapidly over the last decade and accounts for almost 40 per cent of the world’s total environmental market.

Statistics from Industry Canada show that trade with the United States accounts for much of both exports and imports of environmental technologies. Statistics show that from 2001 to 2005, imports from the U.S. declined slowly from just over 70 per cent to just above 65 per cent. There are several forces at play that will likely see a reverse in declining imports.

Of the environmental imports in Canada from the U.S., the largest share is wastewater management technologies (45 per cent) followed monitoring and analysis technologies at 17 per cent.

The world view of Canada is a country that exports raw materials and imports finished goods. Close to 80 per cent of industrial machinery and equipment used in Canada is imported. Even Canadian exported goods contain some 30 to 35 per cent of imported material.

With the Canadian loonie reaching record levels compared to U.S. dollar in recent months, U.S. business is in a favourable position when competing for business in Canada. The strong Canadian dollar is fuelling Canadian interest for imports and the U.S. is well positioned, geographically and technologically, to benefit. Recent trade statistics from the U.S. Department of Commerce show that exports of goods and services from the U.S. into Canada grew by over 11 per cent in the first three quarters of 2007.

A favourable currency exchange is of no use if there is no demand for goods and services. The second force at work drawing U.S. imports into Canada is the crying need for infrastructure renewal.

In Ontario alone, it has been estimated that an investment of $30 to $40 billion in capital investments to upgrade the Province’s water and wastewater infrastructure over the next 15 years. The estimate wasn’t made by a construction association focused with a biased view but by an expert panel commissioned by the Ontario’s Ministry of Public Infrastructure.

The challenge for municipalities and provinces across Canada in addressing the need for upgrading its water and wastewater infrastructure is to actually find money for the task. To date, the federal government has shown tepid interest in an infrastructure renewal program. This may lead municipalities with little choice but to partner with the private sector to finance, construct, and operate new facilities.

There are several large and experienced U.S.-based water and wastewater firms that would be more than willing to finance, build, and operate facilities that supply water and treat wastewater in Canada. A favourable option for a municipality with bare financial cupboards would be an arrangement whereby a private water/wastewater utility takes care of meeting the water/wastewater needs of the citizens for a fixed annual fee for a set period of time.

The U.S. Commercial Service, a trade promotion unit of the International Trade Administration, predicts that water resources equipment and services is one sector in which demand in Canada will be high in the coming years. Last year, the U.S. Commercial Service held two events for U.S. water companies specifically on opportunities in the water and wastewater sector in Canada.

See also  Evaluating the Costs of Cutting Phosphorus in Ontario

The United States is the world’s largest producer of environmental technologies.  Much like Canada, the majority of companies are small and medium-sized enterprises (SMEs). The high percentage of SMEs in the U.S. means that a good proportion of them are looking for Canadian partners.

Small to medium sized U.S. companies that see opportunity in Canada need to ask themselves what business strategies will be most successful selling into Canada. One approach for a many companies will be to take advantage of the fact that there is already a good base of Canadian companies that can market, sell, install, and service equipment and have the local contacts.

The advantage Canadian firms bring to U.S. importers is knowledge of the business culture (there are clear subtleties between the two countries when it comes to marketing), and environmental regulations.

Market penetration of a new technology will go much more smoothly if a U.S. importer has a Canadian company working with it.