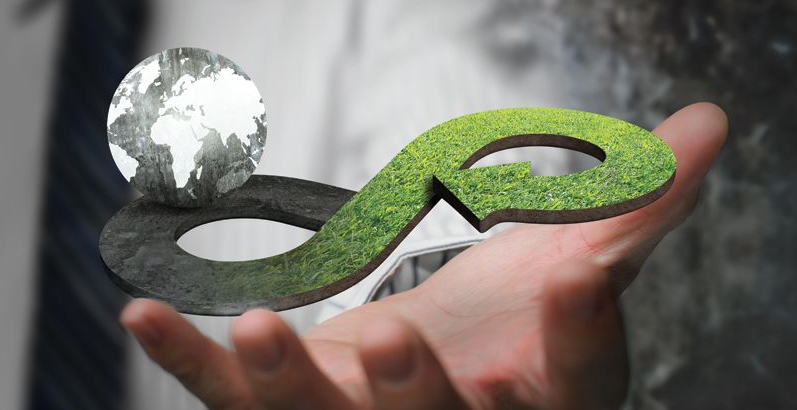 We have been playing a dramatic game of chicken with the natural limits of the planet for centuries. On one side is human behaviour and our linear ‘take, make, and waste’ habits and systems. On the other side is the Earth, humbly maintaining a continuous loop of recovered and recycled resources.

For the Earth, there is no waste. And, as human behaviour rumbles ever closer to the Earth’s natural limits (some say we have already exceeded them) in this global game of chicken, there is only one outcome—the Earth will win and it will reorganize and redistribute all things.

But there is hope if we can think differently and shift to an economic model that mirrors that of the Earth’s system.

So, what’s so bad about the linear economy, anyway?

For centuries, the ability to more rapidly harvest raw material and convert it into a commodity like minerals, energy, clothing, and food has helped people all over the world live more comfortably, travel farther, and prosper more greatly than each generation before.

While the economic gains have been many, the social and environmental losses may have outstripped the economic wealth created. Many of us remember the grossly flawed adage, ‘the solution to pollution is dilution.’ It is engineering philosophies like this that are the product of linear thinking and the reason there is nary a waterway in the world in which contaminants are not found in some concentration.

Socially, while we are living longer, a 2017 study cited in the Economist by San Diego State University noted that we are growing more anxious and depressed as the pace of our civilization and our ultra-connectedness increases. Perhaps as a result of over-consumption or over-exposure through social media, but is there another possibility? Could the by-products of the linear economy be contributing?  Could the parts per billion and parts per trillion floating through the air and water biomagnified in our food and our bodies be responsible for this trip down the emotional rabbit hole, at least partly?

If the answer is yes, then we have not one, but two solid arguments for transitioning to a restorative and regenerative economy that recovers and recycles resources, that eliminates waste, and that conserves our natural capital.

These two arguments are: 1) we cannot exceed the limits of the natural system—we cannot take more than the natural system can replenish; and 2) we cannot allow any resources to escape our industrial system lest they pollute our natural environment and impair the functioning of animals, plants, and the systems that regulate them.

So then, how do we take a more than $74 trillion linear economy and enable its shift to restorative, conservationist circularity? We need to change our mindset first. As producers we need to think harness over harvest. As inventors, we need to innovate and not only create. As governments, we need to have vision rather than subsidy. And, as consumers, we must require rather than forgive.

Recently, I joined a company called Loop Industries Inc., based in Terrebonne, Quebec. Loop is a technology company that is disrupting how plastic, specifically polyethylene terephthalate (or PET) and polyester fiber, is produced and managed. No longer is PET, like water bottles, polyester, and your favorite hoodie, a waste to be landfilled, incinerated, or continuously downcycled.

With Loop’s technology, PET and polyester fibers can be recovered and broken down into their base components with no heat, no pressure, and no water, all impurities removed and then reassembled as virgin quality material. This process so neatly mimics the natural environment that materials once considered symbols of the linear take, make, and waste economy will become a new symbol of hope for the circular economy. 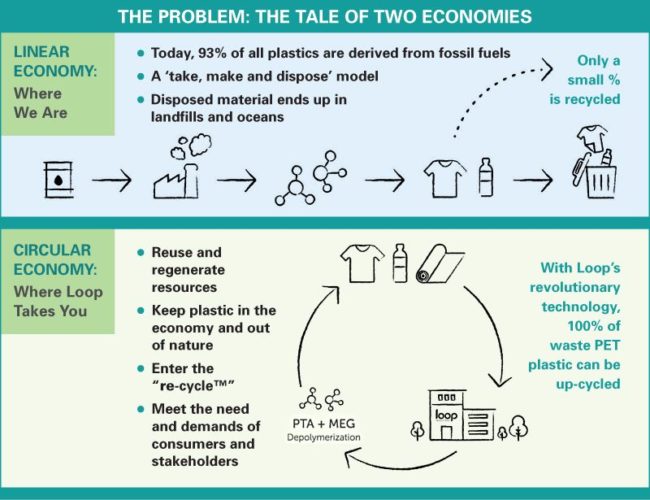 Watch closely as companies that embrace the circular economy outperform in all the measures that matter—environmental, social, and economic. If we work together to challenge the wisdom of the old economy, we can make the transition to the circular economy happen swiftly and completely. Together, we can close the loop.

This article originally appeared in the July/August 2018 edition of Water Canada.