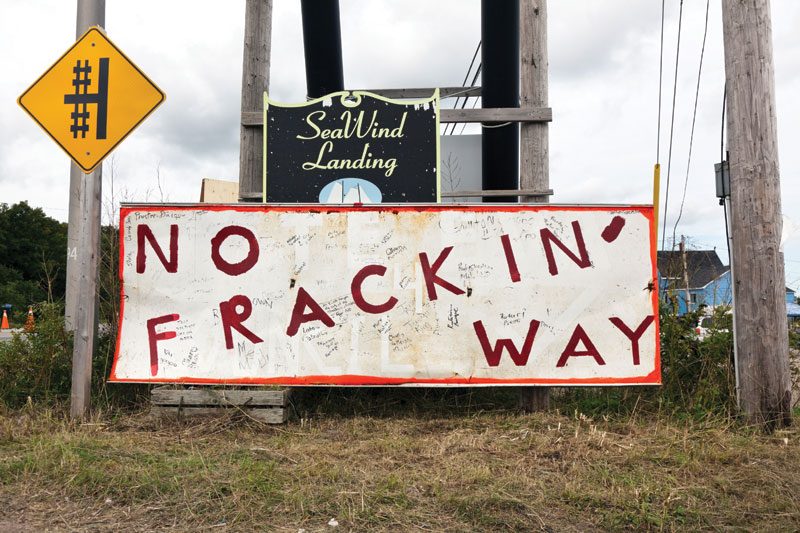 The total volume of shale gas present across Canada is estimated to be greater than 4,995 trillion cubic feet (Tcf), and approximately 573 Tcf of this is recoverable with current extraction technology. However, given Canada’s short history with shale gas production and development, potential reservoirs have not been fully assessed, especially outside of the western provinces where shale gas extraction first began in Canada. Shale gas can be found in British Columbia, Alberta, Saskatchewan, Manitoba, Ontario, Quebec, the Northwest Territories, the Yukon, New Brunswick, and Nova Scotia. Given the widespread potential reservoirs available in Canada, this is a discussion that literally stretches from coast to coast.

Although shale gas has sometimes been referred to as a bridge fuel between traditional fossil fuels and other energy sources, there remains an overriding concern from the public about the potential impacts of its extraction process on the environment, especially the quality of water in nearby surface water bodies or underground aquifers. The Council of Canadians recently released poll results that found that 70 per cent of people in Canada, regardless of political belief, region, age, or education, support a moratorium on hydraulic fracturing. And on October 11, 2014, there was a Global Frackdown, a day of action to call for a ban on fracking.

Given the public concern about this issue, a report prepared for the Petroleum Technology Alliance Canada and Science and Community Environmental Knowledge Fund in 2012 examined the pathways for water contamination from fracking to occur. The report acknowledged that contamination has been linked to improper drilling, development, and production processes, including the leaking of methane gas  due to poor well construction and accidental spills at the surface. But it was ultimately concluded that “none of these incidents [of environmental contamination across North America] have been documented to be caused by the process of hydraulic fracturing.”

Countering this conclusion, Joel Gehman, an assistant professor at the Alberta School of Business, pointed out the hundreds of recently confirmed water contamination cases in Pennsylvania. Were it not for hydraulic fracturing, none of these wells would have been drilled. He said, although the report may be technically correct, “for many people, fracking has come to stand for the entire unconventional shale process,” and these concerns need to be addressed regardless of when water contamination occurs in the unconventional shale development process.

Academic research has proven that hydrocarbon gas has contaminated groundwater wells for some shale gas projects, with poorly constructed wells being cited as the mostly likely cause. “[The fact that water] contamination by fugitive methane and other components of natural gas occurs in some cases is essentially uncontested at this point,” said Daniel Alessi, assistant professor at the University of Alberta and Encana chair in water resources. “Another major concern is that fracturing fluid, flowback, and produced water [can spill] during the storage and transportation of these fluids,” meaning contamination near surface water bodies could occur. But Alessi added, “My conversations with industry, government, and some concerned citizens in Alberta indicate that all parties are taking these environmental issues very seriously.”

Regulations are in place to protect water quality, including standards for drilling and well construction to keep materials associated with hydraulic fracturing separate from drinking water sources. Agreements like the Oil and Gas Conservation Act in Alberta also protect groundwater resources through regulatory standards for hydraulic well casing and cementing. According to the Canadian Association of Petroleum Producers (CAPP) website, all natural gas production in Canada “isolates and protects drinking water (groundwater) from natural gas operations.” Pre-tests are conducted before hydraulic fracturing occurs to ensure the well and associated equipment are in working order and can safely withstand the application of the fracture pressures and flow rates required for the process. This includes an evaluation of well casings and cements installed during the well construction process to prevent the flow of fluids beyond the well casing. Markus Ermisch, CAPP’s media relations officer, said that “wellbore integrity […] is strictly regulated by provincial regulators” and that preventative measures are put in place to keep materials in the well from coming into contact with the surrounding geology.

Despite these agreements and regulations, water contamination still occurs as a result of shale gas extraction. More research and time are needed to thoroughly examine the proper management practices necessary to develop shale gas responsibly. It’s also important to recognize that, moving forward, Canadians need to be kept engaged and informed in the process of shale gas regulation. WC

Gas is naturally contained in small pores between fine mineral grains that compose sedimentary rocks known as shale (hence the name “shale gas”). In order to access the trapped gas, a two-step system is commonly used: horizontal drilling and hydraulic fracturing. The extraction process begins with the drilling of a vertical well into the area just above a shale gas reservoir, which is then angled until it reaches the reservoir on a horizontal plane. Holes are punched in the well to create the greatest contact between the gas reservoir and the well. Hydraulic fracturing is the technique used to access the shale gas: a fluid containing sand or another fine material is forced down and through the well’s perforations. This causes the shale rock to separate along existing fractures or forms new cracks in the rock, creating direct pathways to the well. The fine material, called a proppant, stays within the fractures to keep them open for gas extraction. In Canada, there are some areas where shale gas is present in large enough quantities that it provides a viable source of fossil fuel for extraction.