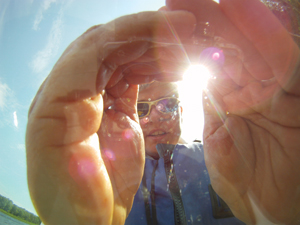 When the art gallery at the Gordon Pinsent Centre for the Arts in Grand Falls-Windsor, Newfoundland put out a call for proposals for its annual Art Ex festival, media artist Liss Platt answered.

The theme, River As Source, piqued her interest. Having never been to Newfoundland, she started by asking how she would want to learn about the Exploits River, which runs through Newfoundland.

Platt, an associate professor in McMaster University’s department of communication studies and multimedia with an interest in surveillance technology, explains her work as an exercise in different ways of understanding and representing the world. Her eventual proposal combined performance art, installation, GPS and web-based tracking, and documentary photographic practice. Technological Exploits would be a science experiment of sorts—she’d discover how an unguided technological traveller would experience and represent the river.

“There’s a contrast and tension between the traditional forms of exploration and what consumer technology might allow us to do,” she says.

Art Ex loved the proposal, so Platt sent her tiny explorer, a polycarbonate sphere affectionately known as “Orbie,” on a 14.5-kilometre journey through the Exploits River from the small town of Badger to Grand Falls, Newfoundland this July.

“The piece is a bit of a parody on how we expect science and technology to help explain the world to us. While it’s kind of ridiculous, it also offers a view that we couldn’t get any other way,” says Platt.

She continues: “It was an opportunity to see how something would react to the river without being guided, but it’s also a question of how technology represents that experience. It raises questions about science, popular culture, and the ways we look at the world.”

Construction
Prior to the performance and exhibition, Platt has to realize her concept. Along with a team of fabricators, guides, and assistants, she built and tested the Orb and learned a bit about the Exploits.

The Orb
Orbie is a strong, durable, 18-inch polycarbonate sphere—the same material used to cover highway lights. After much searching, Platt found a floor model through a fabrication vendor in Owen Sound, Ontario.

The camera
All of Orbie’s images were captured using a waterproof, compact GoPro Surf camera. Made for sport and hobby photography, it can attach to bike helmets, surf boards, skateboards, et cetera. Platt set the camera to take a photograph every two seconds, and compressed the entire day’s journey in a 12.5-minute video, making every still frame equal to four frames or 7-7.5 images per second. “I didn’t edit the video at all,” says Platt. “The video captures everything from the moment I turned it on to the moment the battery died. I tried to let it be a device in the wild.”

The GPS
To track the Orb’s journey, Platt included a GPS tracking device made for back-country hikers. Every ten minutes, it sent the Orb’s location to a tracking website. Back at the studio, Platt’s assistant charted the Orb’s progress on a Google map. “A lot of my work is about capturing the traces or gestures of an activity,” explains Platt.

To balance the equipment inside the Orb, Platt and her team screwed the camera’s arm to a pipe fitting that was sealed to the Orb and used Velcro to fasten the GPS device and some small lead weights on the opposite side of the camera.

Orbie’s journey
Even though she’d done some testing prior to the performance in Grand Falls, Platt wasn’t quite sure what to expect on the Exploits. “I was really worried we’d lose the Orb,” she admits. “Part of this project was an experiment, and failure was part of the equation.”

At 10 a.m. on a sunny day, Platt and her team, including a local river guide and a photographer from St. John’s, set off to begin the performance. They followed Orbie in a canoe, maintaining a good distance so their interference would be minimal. A few times, however, they had to step in.

“What I hadn’t accounted for, because I wasn’t familiar with the river, was that it was so wide and open and that the wind would play a huge role. At times, it was a stronger force than the current, and it blew the Orb into the shore,” she says. “Anytime it got caught in the reeds or the shore, we’d help it move along.” Platt figures that if she tried another expedition on a similar river, she would add more weights.

After five hours following and tracking the Orb, the expedition was over. The team retrieved Orbie just before the falls and began processing its documentation for viewing in the gallery.

Feedback and response
Bridging communities is an important goal of Platt’s work, and she was pleasantly surprised by the different types of people who were interested, from the locals who helped guide the canoe trip during the performance to the visitors in the gallery. “I wanted to give everyone an opportunity to participate and enjoy,” she says.

Platt was also glad to see the people of Grand Falls recognize and relate to the Exploits through Orbie’s eye, and she received a lot of positive feedback. “People were animated and excited,” she says. “They liked the attention the river was getting. They were seeing the river in a new light.”

Future
Platt had such a great time with the Orb’s maiden voyage that now she’s looking for other rivers to explore. “The Exploits is wide and shallow. Wind is a strong character, whereas a narrow, rushing river would provide a very different representation,” she says. “I’d be interested in a river that has a much stronger current. It would be a nice contrast to the low flow of the Exploits,” she says.

Platt also plans to explore rivers that flow through urban centres, and she would love to send her technological explorer on a trip through the Farmington River in Connecticut, where she spent her formative years. “Every journey would be different,” she says.  WC