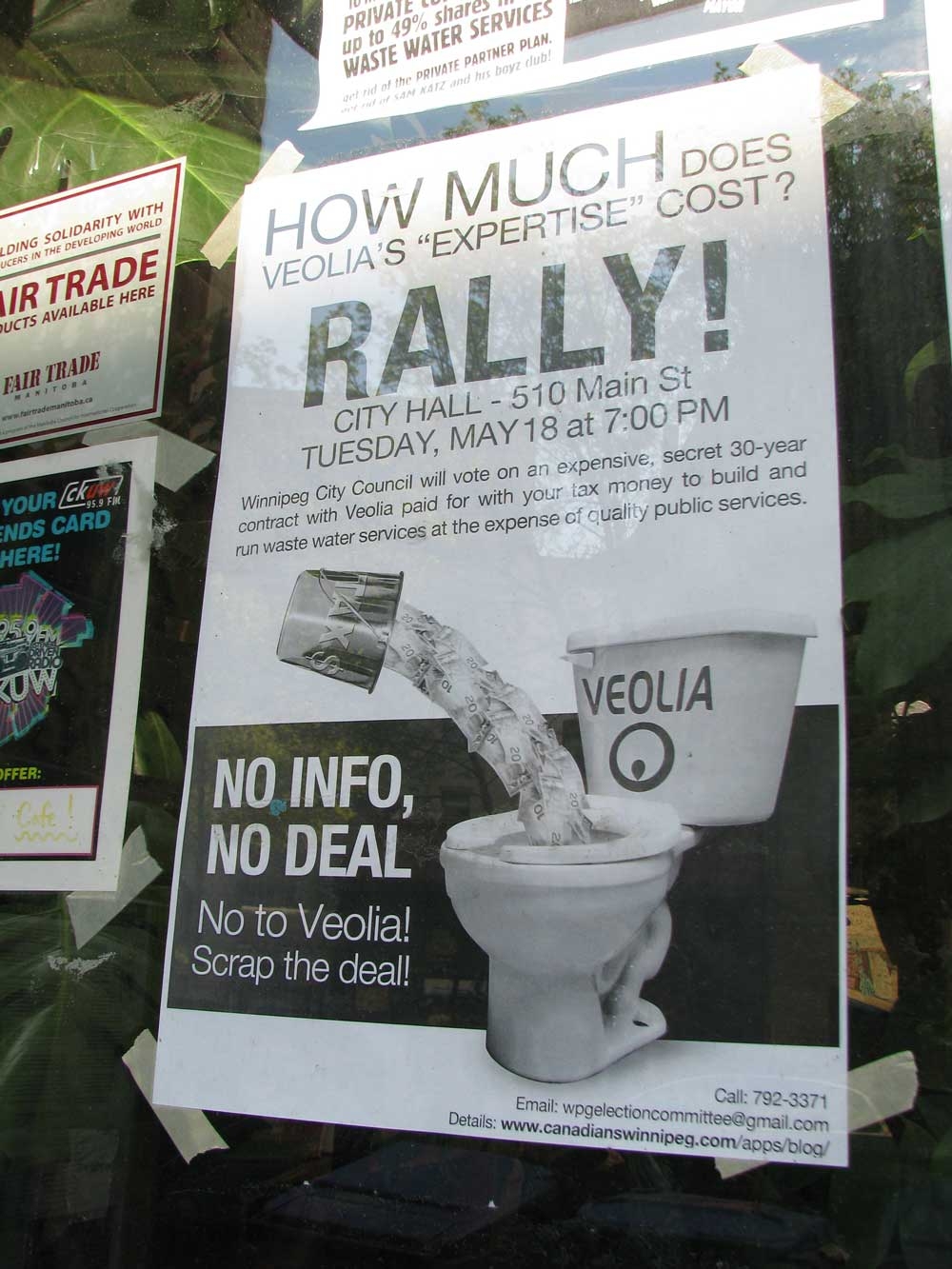 *Update* Winnipeg mayoral candidate Judy Wasylycia-Leis held a press conference on Sunday demanding that Mayor Sam Katz release the details of the City of Winnipeg and Veolia Canada contract, approved by council in May and yet to be signed.

On May 19 Winnipeg city councillors voted in favour of a controversial new 30-year deal with Veolia Canada to upgrade two of the city’s three wastewater treatment plants.

The contract is based on an eight-page report prepared by Winnipeg Public Services for the City’s Environmental Protection Committee (EPC), which recommended a design-build partnership in which the city will retain control of its sewage treatment plants and Veolia will provide expertise.

The South End and North End facilities need to be constructed by 2012 and 2014 respectively in order for the City to meet environmental legislation demands from the Province of Manitoba—leaving those opposed to the deal to ask what Veolia’s role will be for the remainder of the 30-year contract.

“The council, when it came time to vote on the matter, wasn’t really able to get answers on the details of the contract,” says Councillor Jenny Gerbasi. “We should know how much we are paying [Veolia] and exactly the scope of what it is they are doing.”

Last July the City voted to form a Municipal Corporate Utility (MCU) that would include a public-private partnership (P3) with a strategic partner to complete approximately $660 million in infrastructure upgrades to the facilities. The partner was to own 49 per cent of a subsidiary of the new corporation—a model similar to that of EPCOR Utilities Inc. in Edmonton. But that part of the plan was eventually removed and the term “P3” was absent from the EPC report.

In the end the report was a vague document that left councillors scratching their heads over the lack of transparency, Gerbasi says. “I understand there are certain provisions that can’t be made public, but they could have taken the elected members of council behind closed doors and made us sign a confidentiality agreement. They didn’t even do that,” she adds, noting that the City has no legal requirement to give the details to council members. “To me it’s more of an ethical requirement.”

City Council voted nine to four in favour of the contract, but Gerbasi noted that some councillors were absent from the vote due to illness, and one chair currently sits empty after the recent death of Councillor Bill Clement.

Councillor Gord Steeves, who voted in favour of the contract, said the City has no choice but to bring in a third-party company.

“We simply don’t have the expertise to build and run these facilities in-house,” he said, adding that the contract is structured so that Veolia only profits from the deal if the City can save money on the capital outlay. “With these professionals in our camp we can assure the project comes in under budget because that’s the only way they are going to profit.”

According to the report, the contract could save the City of Winnipeg between 10 and 20 per cent of total operating costs. Veolia will share any financial risks associated with the plants.

Steeves said he feels the opposition to the deal from other councillors stems from the original model of the MCU.

“It started off as people being concerned that we are selling our water service and privatizing it,” he explained. “This has nothing to do with water; it only has to do with sewage. Those opposed seem to be hanging onto their opposition for political reasons.”

But according to Michael Welch, chair of the Winnipeg chapter of the Council of Canadians—a group that champions pubic control and administration of vital services such as water and waste—the deal could be looked at as a first step toward privatization.

“This new utility will be run, as we understand it, on a for-profit basis, and there remain concerns about that mandate for securing profit,” he says. “We’re concerned about is the increasing role of private for-profit elements into this system, which would remove the running of these essential services in the interest of the citizens, and in the interest of the environment.”

He also criticized the City’s choice of Veolia, a French multinational with 300,000 employees worldwide, as the third-party group. Pointing to Angelton, Texas and Indianapolis, Indiana as examples, he said Veolia has been caught up in several lawsuits over “corruption and shoddy work.”

A Veolia representative said the company will not comment on the City of Winnipeg deal until the contract moves through its final stages.

Steeves defended the City’s decision to award the contract to Veolia, noting that the opposition’s examples are for models where the company has more control than it will in Winnipeg.

“The comparisons that have been drawn are where the company essentially controls the water supply and the labour force. There’s nothing even close to resembling that here,” he said.

Under the Manitoba Environment Act, the City of Winnipeg could be fined up to $1 million a day if the upgrades are not completed on time.

Canadian Water: Get Ready for a Free-Trade Deal With China